New Technology Puts Journalists on Defense, Just Like Rest of Us 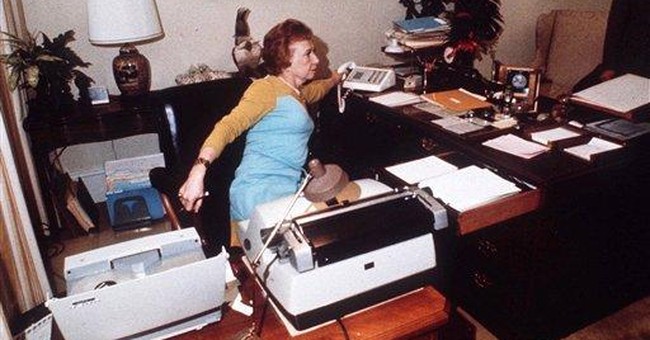 This is the way the world ends, not with a bang but a blogger.

Millions of bloggers, actually. And they are taking back freedom of the press from journalists unwilling and unable to use it in a fair and responsible manner.

A few weeks ago, we saw Helen Thomas confess her nutty anti-Semitism because a blogger caught her in an unusually candid moment. We found out what many have long suspected: that she’s a disgusting bigot.

Then there was the Gen. McChrystal controversy as our top general in Afghanistan reportedly criticized the Obama administration to a Rolling Stone reporter. Blogger critics argued “The Runaway General” showed the journalistic beat system prevents warts-and-all portrayals such as this one. Reporters are often too cozy with sources to make them look bad. Adding to that ethical issue, The Washington Post followed with a story saying the reporter in this case might have violated rules about what would be off the record. Rolling Stone denied it of course.

Washington Post blogger Dave Weigel. Weigel was hired by the Post three months ago and continued his previous anti-conservative efforts with an attack on those “anti-gay marriage bigots” and making a joke about Matt Drudge “diddling” an 8-year-old boy. He was forced to apologize but remarkably kept his job.

Remember, this is the Post that ruined Sen. George Allen’s career because he said “macaca,” the most obscure offensive comment in modern politics. “Macaca,” which about 12 people knew to be a racial slur, has been used in the Post 187 times since Allen first uttered the term in August 2006. More than 110 of those were prior to the election that Allen then lost.

But Weigel survived his “macaca moment” with nary a scratch. Every day afterward he would highlight the worst of the conservative movement in a great example of skewed reporting while the Post’s other bloggers literally celebrated the liberal world view. It was doomed to fail – more so since Weigel comments on Twitter often mocked the very movement he was covering.

Then all hell broke loose. Just like Climate Gate, leaked e-mails created a stir. E-mail comments Weigel had sent to a list of lefty pundits and journalists reportedly blasted several top conservatives and caused Weigel to offer his resignation. Before Post editors could decide, The Daily Caller had a more complete version of Weigel’s e-mails that were even worse.

In this batch, the Daily Caller quoted him saying when Rush Limbaugh went in the hospital, “I hope he fails.” Weigel went on to attack pretty much anybody who’s anybody in the conservative movement – Gingrich, Beck, Drudge again – and everyone else, too. In one case, the Caller said Weigel claimed conservatives were “using the media to ‘violently, angrily divide America.’”

The Post accepted the resignation two months too late. Weigel’s departure has been enormous news for the inside the Beltway crowd. It’s probably gotten more press than any resignation since Nixon. Pundits, journalism professors, the Post ombudsman and more have all chimed in on the issue. Virtually every lefty Web outlet that matters has opined, from HuffingtonPost to Slate to Salon. Tons of Twitter and Facebook posts have been devoted to either the justice or injustice of it all.

The Weigel situation has become an object lesson in the way Washington really works – and the way the world has changed. D.C.’s in-crowd, both left and right, has closed ranks around him as one of their own. Some people I respect have had kind words about him, so he is no ogre. But many of his supporters also are letting their friendships cloud their judgment. Even Weigel admits he screwed up. He chalked his actions up to “hubris” in a piece he wrote that makes him appear more conservative than he ever did while actually working in Washington. “Was I really that conservative? Yes,” he wrote. Then he admitted he changed. “At ‘Reason,’ I'd become a little less favorable to Republicans, and I'd never been shy about the fact that I was pro-gay marriage and pro-open borders.”

In an unsurprising move, Weigel signed on to a contributor to MSNBC, the most crazy lefty network he could find. “Welcome aboard and my condolences, uh, congratulations!” wrote “Countdown” host Keith Olbermann on Twitter. Perhaps now, his conservative supporters will acknowledge Weigel’s gone to the loony left.

But there’s more to it than that. Helen Thomas and Weigel should serve as a wake-up call to every person in public life. The message: the rules have changed dramatically. Technology, Facebook, Twitter and more have made privacy more of a theory than a fact. What we all do in every part of our lives – e-mails, embarrassments and more – can have very real consequences. No one can easily survive that level of transparency.

Ordinary Americans have lived with those rules for decades. New technology has made that reality more intrusive. Journalists are just discovering that now everyone is going to hold them to the same standards they’ve held everyone else. The rise of citizen journalism, of a few conservative news outlets and people like Andrew Breitbart, is letting everyone see what journalists are really like and reporters and editors are learning life on the other side of camera.