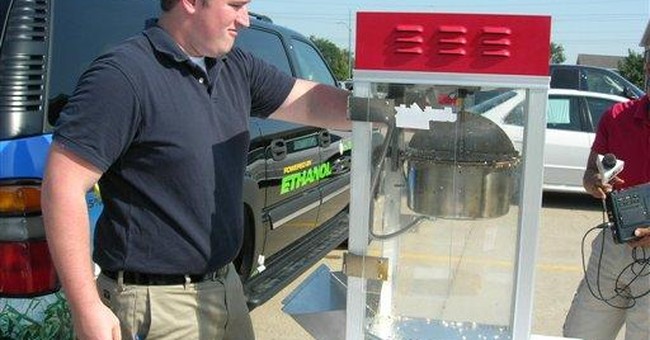 Thanks to U.S. policies mandating ethanol and biofuel usage, giving thanks for a bountiful meal last week probably cost you.

For the past four decades, food prices have remained fairly stable, lagging far behind inflation. But as the USDA reports, food prices this year are soaring, rising twice the rate of inflation—the highest annual increase in over a decade. Corn prices, which doubled since last year, are close to $4 a bushel. Eggs are up 44 percent from last year, while milk, up 21 percent, has jumped to $3.83 a gallon—the highest retail price since World War Two.

What’s driving record food prices? Federal policies mandating more food for fuel are a big factor. Requirements that we use more ethanol over oil for energy use are causing us to divert larger amounts of farmland from food to corn-based fuel, contributing to record food costs. In 2000, we were using a modest 6 percent of our cropland for ethanol production. Last year, that share increased to 20 percent; this year, one quarter of our corn harvest is diverted from food to fuel.

As the Organisation for Economic Co-operation and Development (OECD) reports, government policies around the world to replace oil with ethanol and biofuels are drawing us into an ugly “food-versus-fuel” battle: “Any diversion of land from food or feed production to production of energy biomass will influence food prices from the start, as both compete for the same inputs.”

For the poor, the situation could grow dire. Already, low-income families in the United States spend 40 percent of their budget on food. Higher food prices could set off hunger and malnutrition for those already struggling.

Enter the U.S. Congress. Driven by powerful agribusiness and ethanol lobby interests, Congress is dead-set on further raising the “renewable fuel standard” for ethanol and biofuels, showing little regard for inflated food prices, its impact on the poor, and the recent stream of scientific studies showing ethanol’s harmful impact on the environment.

For what? We have known for years that ethanol, like other “poster child” renewables that were supposed to end our dependence on oil, is not all that and a bag of corn chips. More recently, we’ve learned its effect is even worse than we thought and that, as the OECD reports, “the cure [may be] worse than the disease.”

Producing biofuels leaves a huge ecological footprint, exceeding that of fossil fuels. The recent OECD report finds, “When…soil acidification, fertilizer use, biodiversity loss, and toxicity of agricultural pesticides are taken into account, the overall environmental impacts of ethanol and biofuels can very easily exceed those of petrol and mineral diesel.”

Similarly, nitrous oxide released in the production of biofuels actually increases greenhouse gas emissions—about twice as much as previously thought—and, according to Nobel Laureate scientist Paul Crutzen, is likely contributing to global warming.

Moreover, ethanol requires enormous quantities of water, a valuable resource already in short supply in many areas of the nation. Producing one gallon of ethanol fuel, including the water needed to grow corn, requires an astonishing 1,700 gallons of water, according to Cornell University ecology professor David Pimentel.

As the New York Times recently summarized in an editorial on biofuel: “What’s wrong is letting politics—the kind that leads to unnecessary subsidies, the invasion of natural landscapes…and soaring food prices that hurt the poor—rather than sound science and sound economics drive America’s energy policy.”

Yet Washington remains fixated on biofuels, ironically furthering our dependence on foreign oil. Government’s selection of ethanol as the chosen source of fuel discourages refiners from expanding capacity. Since ethanol can’t come close to meeting U.S. demand for fuel—turning our entire corn crop to fuel production would only replace 12 percent of our current gasoline consumption—we dangerously risk increasing our reliance on imports.

None of this will matter, of course, when Congress returns to business on the energy bill. As is the way of the world in the nation’s capital, the powerful agribusiness and ethanol interests will trump science, and Congress will turn a blind eye to the poor’s struggle against soaring food prices.