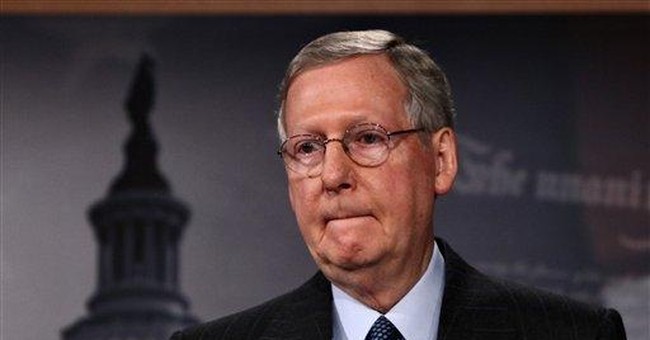 The key to a Republican resurgence will not lie in a campaign slogan, rhetorical message or demographic pandering: It will require strategy and tactics.

Republicans must end the intimidation factor of the mainstream press. Republicans need to understand that no amount of pandering will result in favorable media coverage. Since the media have adopted a partisan political agenda, Republicans must subject these agents of propaganda to the same vetting process and public scrutiny they use for the candidates. The media must not be allowed to operate as a political party incognito.

Moreover, the Republican message has no punch. It is delivered in a fog of non-committal rhetoric couched in words without conviction. Call it the Miranda approach: They want to be sure that nothing they say can and will be used against them. It may be politically safe, but it hardly instills confi dence in the American voter. For all the reasons that have caused Republicans to su! er at the polls, this spineless, conciliatory, back peddling sits at the top of the list.

The Lef" celebrates unsavory and radical behavior, and linking the Democrats to these kinds of figures is of no use. Domestic terrorist William Ayers is now enjoying celebrity status as a result of being used in the last election. What is required is an airtight argument as to the dangers, consequences and deterioration we su! er as a result of this despicable behavior. Only then can the Democrats be linked with those of such disgusting character and reputation.

The most e! ective strategy for the Dems is denial of an issue and immediate rebuttal, which is then reverberated in the “echo chamber.” Republicans must develop a serious “anti-talking-point” strategy. In short, the Dems have been extremely successful in silencing criticism from their opposition while clearly articulating their own attacks—high in vitriol and slander but absent fact or truth. It is time for the GOP to join the information age and develop a network system that can dwarf the formidable juggernaut created by the Democratic Party. It must be broad in scope and intimately aligned with both the conservative and Republican blogosphere through a grassroots movement.

The Republican Party can regain the position of leadership if they: demonstrate the dangers of the current entitlement mentality; clearly articulate that our rights come from God, not government; dispel the growing perception of “rule by the government;” awaken the ability in the people to think for themselves; put names to those responsible for our failures; and most importantly, “dare to lead.”