The Anti-Employee No Choice Act 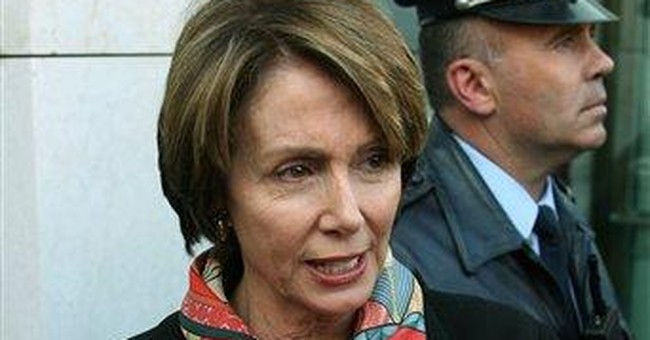 One of the more egregiously misnamed bills in the history of Congress has got to be the “Employee Free Choice Act,” a measure which is neither pro-employee nor a free choice. What it really does is allow union bosses to force employers to recognize a union as the workforce’s bargaining agent without the hassle of a supervised, secret ballot election.

Known on Capitol Hill as H.R. 800, the proposed law would require employers to let a union into their family if the union bosses are able to strong-arm or fool a majority of workers into signing a “card” indicating support for the union. “Yo, Tony, you wanna join da union, don’t ya?” asks the burly, 300-pound organizer with a baseball bat in one hand and a set of brass knuckles on the other. “Just sign this little ol’ card, capisce?”

What kind of “free choice” does that poor “employee” have?

Nevertheless, the new-and-improved Democrat majority (lemon-freshened!) under Speaker Nancy Pelosi passed H.R. 800 a couple weeks ago. Its fate is now in the hands of the new-and-improved (with retsin!) Democrat majority in the Senate under Harry Reid. With any luck, pro-employee Republicans will be able to use Senate rules, including the filibuster, to block this sop to organized labor.

But to show how this bill is really all about boosting the Unionistas sagging membership numbers and nothing about the average American worker, consider some of the amendments offered by Republicans during debate over the bill in the House. Amendments which never saw the light of day and were crushed like a beer mug (http://www.lasvegassun.com/sunbin/stories/text/1998/jan/29/506763908.html) across the skull of a tourist crossing a Las Vegas Strip picket line.

An amendment put forward by Rep. Charles W. Boustany Jr. (R-La.) would have made it an unfair labor practice for a union to fail to return a previously signed authorization card within five days of an employee’s request. In other words, if an “employee” wanted to exercise his or her “free choice” by changing their mind and asking to tear up the “card” they signed supporting the union, they’d be allowed to do so. But this pro-employee amendment didn’t make it into the bill.

An amendment by Rep. Ginny Brown-Waite (R-Fla.) would have prevented labor unions from collecting any membership fees from an employee without first verifying that the employee was either a U.S. citizen or a lawful resident permitted to work in the United States. It doesn’t make sense to allow illegal aliens to take the jobs of citizens and workers who immigrated here legally, right? But this pro-U.S. worker amendment didn’t make it into the bill.

An amendment by Rep. David Davis (R-Tenn.) would have required that penalties against employers who coerce employees during a card-check campaign also apply to unions which coerce employees during a card-check campaign. Fair is fair, right? And the whole point is to assure that the “employee” gets to make a “free choice,” free from coercion by ANY party, right? But this pro-employee amendment didn’t make it into the bill.

An amendment by Rep. Jo Ann Emerson (R-Mo.) would have exempted small businesses which employ fewer than 50 workers, just like how the Family Medical Leave Act exempts such small businesses. This helps protect the jobs of employees at small firms which don’t have the resources to battle attacks by the union “borg,” often resulting in the destruction of the business and the loss of jobs by the employees who work there. But this pro-employee/pro-small business amendment didn’t make it into the bill.

An amendment by Rep. Virginia Foxx (R-NC) would have allowed employees to put themselves on a “do not call or contact” list in order to avoid union pressure and solicitations to sign a card in a card-check organizing campaign. In other words, to help assure that the “employee” gets to make a “free choice.” But this pro-employee amendment didn’t make it into the bill.

An amendment by Rep. Steve King (R-Iowa) would have allowed an employee to rescind his “card” authorization, and require that such a request would be held in confidence in order to protect the employee from both coercion and possible retribution. But this pro-employee protection amendment didn’t make it into the bill.

Another amendment offered by Rep. King would have allowed a business the right to only hire workers who were actually seeking bona fide employment with the company. You see, union bosses often try to get union agitators hired by targeted companies. It’s an underhanded tactic called “salting.” These agitators aren’t there to actually do the work they were hired to do; they’re there only to agitate the workforce into accepting the union as its bargaining agent. Alas, this pro-employee amendment didn’t make it into the bill either.

An amendment by Rep. Marilyn Musgrave (R-Colo.) would have prohibited forcing an employee to join a union or pay dues/fees to a union as a condition of employment. In other words, all “employees” would be guaranteed a “free choice” on whether or not to join a union. But this pro-employee free choice amendment didn’t make it into the bill.

And finally, my personal favorite. Rep. John Kline (R-Minn.) proposed an amendment which simply stated that if a union could be certified by way of a “card check,” then a “card check” could also be used to DE-certify a union. Again, this amendment would give “employees” a “free choice” on whether or not they wanted to continue paying for the “services” of the union. And again, this pro-employee free choice amendment didn’t make it into the bill.

H.R. 800 is definitely not for “employees.” Nor does it provide employees with any kind of “free choice.” This is nothing more than payback to Big Labor by the Democrats for Big Labor’s efforts to put the Democrats back in power, all in the hope of boosting the power of Union Bosses by forcing unionization on unsuspecting employees and unwilling employers.

For everyone’s sake, let’s hope Republicans make a better opposition party when it comes to bad legislation such as this than they did a majority party.