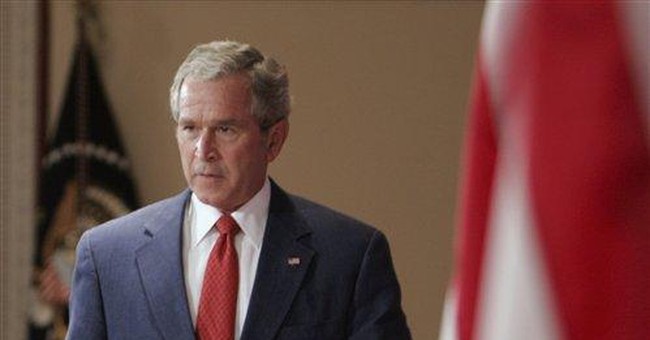 In his now infamous “Malaise” speech in 1979, Jimmy Carter demonstrated a fundamental misunderstanding of his country and his countrymen. It was the tipping point for his presidency.

Last week, President Bush had his own malaise moment when he attacked a large segment of the American people and insinuated they were ignorant about the immigration bill he has fashioned with Ted Kennedy.

The American people don’t like to be criticized by their presidents, especially when they are at 28 percent approval, either then or now. This clash is a “Panama Canal moment” for the GOP.

The bar fight over the newest immigration “compromise” bill is the Gotterdammerung for the party and the conservative movement. The outcome will determine what direction the GOP will take and whether it will once again be consigned to minority status for a generation.

It is not the first time there has been a trial separation and eventually a divorce between conservatism and Republicanism. In 1971, conservatives gathered at Bill Buckley’s home in New York. The meeting was called because Richard Nixon had supported his aide, Pat Moynihan’s proposal for a federally-mandated guaranteed household income. That tore it for conservatives.

Nixon had already instituted wage and price controls, appointed liberals to his Administration, was cozying up to the Soviets and was about to betray America’s longtime ally, Taiwan, to recognize instead Red China. “Tricky Dick” tricked conservatives into supporting him in 1968 and then immediately set about to break every promise he’d ever made to the Right.

The group called themselves the “Manhattan Twelve” and signed a manifesto announcing their “Declaration of Independence” from Nixon and his Republican Party. They hence decided to forget about the losers that made up what was left of the GOP and focused instead on building a political movement. At this, they were very successful and were guided only by their principles.

The conservative movement all through the late 1970’s led the GOP around by the nose, on the Panama Canal treaties, on SALT II, on ERA, on tax cuts, on opposition to Jimmy Carter and support for Ronald Reagan. The GOP of the 1970’s was clueless, just as their fancy counterparts are of the current Republican Party.

True conservatives are now faced with this choice once again. In order to save their ideology, should the conservative movement declare it’s independence from the Bush Administration and the GOP? The arguments for doing so are compelling.

The immigration bill, most conservatives believe, is a sellout of everything they hold dear – the rule of law, justice, freedom and sovereignty. But rather than listen to the grassroots American people, the GOP elites are listening intently instead to their master’s voice, corporate America.

Despite “Bushophant” Michael Gerson’s derivative arguments calling conservatives bigots, the rule of law still means something to most people in this country.

The GOP’s arrogance is doubly insulting because they know how the grassroots feels or at least should. All they have to do is listen to Laura Ingraham, Rush Limbaugh or Sean Hannity, read any of a dozen conservative columnists, websites and blogs to know what conservatives think about this bill.

The outrage over this betrayal is evident. Republicans across the board seemed astonished when the first quarter FEC reports came out and all told, the Democratic presidential candidates out-raised the Republicans by $25 million. The party committees are lagging behind their Democratic counterparts, as reported in the Washington Times.

There is no mystery. Conservatives, who voted in droves for Democrats and against Republicans as a protest vote last November are now voting with their pocketbooks. The sleeping giant of the conservative movement has been awakened and if the immigration bill passes, one can imagine an organized effort to shut down all grassroots conservative money from going to any GOP party committee and instead, direct their hard-earned dollars to legitimate conservative groups.

Some may argue a breakup is premature citing the War on Terror, tax cuts and the appointments of Samuel Alito and John Roberts to the federal bench.

George W. Bush campaigned on supporting tax cuts and appointing conservatives to the courts and conservatives expected him to keep his promises. However, if the White House had had its way, Alberto Gonzales and Harriet Meiers would have been appointed instead. It was conservatives who demanded conservative judges and the White House unhappily went along. As my father used to say, you don’t get medals for not robbing banks. You’re supposed to not rob banks.

Traditional conservatives are patriots and are thus conflicted over the war in Iraq. They support and honor the American GI Joes and Janes, but deep down, they believe this is not their war or at least that it has been managed poorly. They may have sung a few hymns, they never joined the choir.

The war has held together the unhappy shotgun marriage of the elitist GOP and the populist conservatives, but the D-word (“divorce”) is now on the lips of many in the movement.

The arguments for at least a trial separation are legion; from steel tariffs to federal mandates to the states educational systems, to the biggest entitlement since the Great Society to the corruption of Republican “lawmakers” and Enron and the GOP K Street walkers, whose main job is to convince GOP lawmakers into doing un-Republican things. Arrogance, ignorance, the unseemly pursuit of power over principles and betrayal of conservatism are the hallmarks of the current GOP.

The elites in the Republican Party are in denial about this, as they are about last November. But this is not surprising. Republicans have made a cottage industry out of denial, in 1960 when JFK won, in 1992 when George H. W. Bush lost and August 9, 1974…the day Nixon resigned.