Advice to the Reagan Lorn 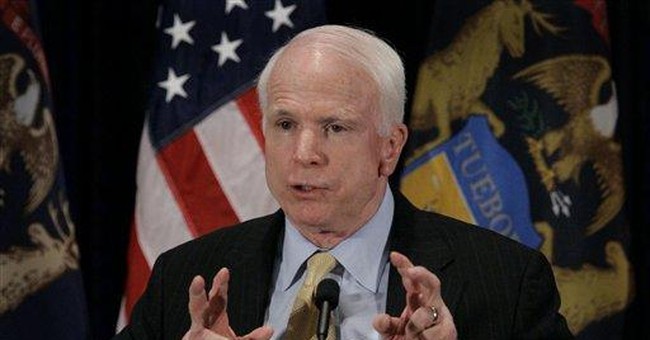 Aspirants to the mantle of Ronald Reagan will gather tonight at his presidential library to debate who among them is his most worthy heir.

One person who won't be participating in the debate in Simi Valley is the incumbent President. Indeed, in an insightful poll conducted by Strategic Vision in five states, Republicans were asked if George W. Bush is in the mold of the Gipper. From a "low" of 62 percent to a high of 78 percent, Republicans said, no, Bush is no Reaganite.

But who really was the man that commands so much reverence from the GOP faithful and their leaders?

Reagan was an utterly charming, articulate and kind man. The witty and graceful man Americans saw in public was the same man in private, unlike so many phony politicians of today. His staff adored him. But this is not the only thing that made Ronald Reagan unique and beloved by millions. He said what he meant and meant what he said and was always clear in what in what he said. Reagan was a man with an absolute belief in his ideas but he was principled not rigid in his ideas. He learned from experience and applied those new ideas to policy through his principled framework of anti-communism, less government and more freedom.

Reagan was not always a tax cutter. He only embraced supply-side economics a few years before he ran in 1980. He applied his stalwart anti-communism by building up the US military but Reagan preferred to use his bully pulpit to persuade rather than engage the Kremlin in a shooting war. He spoke directly to the millions enslaved behind the Iron Curtain when he told them time and again that their slave masters were evil and America was on their side. He also brilliantly decided, in alliance Pope John Paul II and Margaret Thatcher, to undermine communist authority through indigenous anti-communist movements—Solidarity in Poland, dissidents like Vaclav Havel throughout the Eastern bloc and the Contras in Nicaragua. Reagan put Soviet communism under the heel of his cowboy boot and crushed it.

Reagan also had a strong libertarian streak and as late as 1975 was still describing himself as a "libertarian conservative." A close study of Reagan's writing and speeches reveals that Reagan would have been very dubious about Republican passed legislation that has trampled on the First Amendment including McCain-Feingold and the Patriot Act. Acting on principle and courage, Reagan opposed California's 1978 Proposition 6 to ban homosexuals from teaching in public schools.

The question of Iraq is more problematic. No one knows how Reagan would have reacted after September 11, 2001. Reagan well understood that the first role of the government is to protect the citizenry and he certainly would have sent the US military into Afghanistan. Any president who had not gone in there to wipe out al Qaeda and the Taliban would have been impeached. Reagan tried three times for an active duty assignment during WWII but poor eyesight kept him out of the war. Yet he was acutely aware of the risks of sending American boys into harm's way, that each of these young Americans had mothers, fathers and families who loved them very much. Reagan had a deep respect for the courage and sacrifice of the American fighting man. The Reagans were always fond of one particular young war hero: John McCain.

Ronald Reagan's belief in the future defined him. His mind was focused on the promise of tomorrow and the next generation of Americans with whom he had a special relationship. Indeed, in his 1984 landslide, Reagan won 59-percent of the popular vote and 66-percent of the under thirty vote. When he left office in January of 1989, his overall approval rating was 73-percent but among voters under 30 it was an astonishing 85-percent. This helps to explain why Reagan and John Kennedy were the last two American presidents who could go onto university campuses without fear of widespread dissent or reprisals. Both spoke to the hearts of young Americans because both were young at heart.

Reagan was a small town kid from the Midwest and deeply distrustful of the concentration of power, either by government or business. He believed deeply in the goodness of the American people often telling them, "don't trust me; trust yourself." He believed power flowed upwards from the people to the government, not the other way around. "Public servant" meant just that to Citizen Reagan.

And Reagan didn't monkey around with conservatism. He didn't feel the need to redefine it as "kinder and gentler" or "compassionate conservatism" which he knew only meant the noun was the enemy of the adjective. Reagan knew that he only needed to explain his brand of optimistic conservatism to educate and then motivate, not sullied or used to fool people. Reagan wanted to inspire his fellow Americans to action. "If not us, who? If not now, when?" Reagan did not engage in debates about the past, what today seems to thrill puerile politicians in both parties. Frankly, Reagan had bigger things on his mind than petty finger pointing.

Republicans running for president should not alter Reagan or his record. Rudy Giuliani has given innumerable speeches across the country citing a supposed Reagan quote: "My 80 percent friend is not my 20 percent enemy." Clever line but a thorough check had found that Reagan apparently never said anything even resembling this. Writer Peter Hannaford, a longtime Reagan associate, concurs.

Mitt Romney now calls Reagan a "hero" and "visionary" but in earlier campaigns distanced himself from the Gipper saying he did not want a "return" to that era.

Liberal historian John Diggins recently wrote a book in which he rated Reagan as one of our greatest presidents alongside Washington, Lincoln and FDR. The Republican men meeting in Simi Valley should take a few hours to walk through the library and chat with Mrs. Reagan to better understand not only how great Reagan was, but how difficult it will be for any of them to pick up his standard.

But they should try.