Democrats all wet on Tax Day 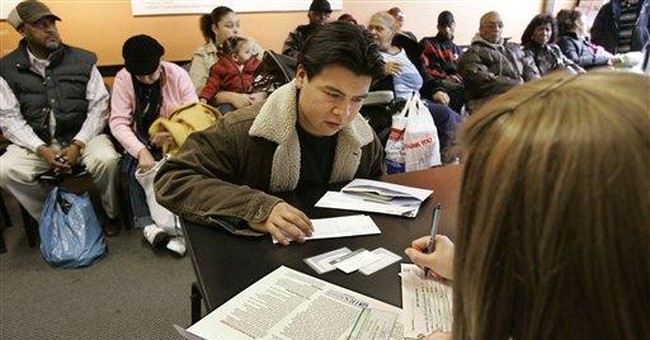 The differences between America's two major political parties are never clearer than they are on Tax Day. As the deadline passes for completing the complicated forms required to turn over your hard-earned money to the federal government, it is worth examining those differences, and what they mean for our nation's future.

Republicans believe that keeping taxes low and letting you keep more of your own money is good sense for your pocketbook and the American economy. We believe the federal government should make paying the taxes you owe as easy as possible. We believe that the best way to balance the budget is to reduce spending and grow the economy, not to take even more money from the American people.

In the four months since Democrats took the majority in Congress, they have clearly laid out a different view on taxes. The budget which passed the House last month is a blueprint for the largest tax increase in American history. While they have not come right out and said so, it appears Democrats plan to bring back the marriage penalty and the estate tax, end the child tax credit, eliminate the ten percent tax bracket, and raise tax rates on millions of Americans. And to help collect these untold billions of dollars in new taxes, they are pursuing new schemes to make paying your tax bill even more onerous.

The tax relief that Republicans passed in 2001 and 2003 is working. Before the 2003 tax cuts, we were losing an average of 100,000 jobs per month, average GDP growth was 1.1 percent, and unemployment was 6.1 percent. Since then, we've added 7.6 million new jobs (an average of 170,000 per month), average GDP growth has been 3.5 percent (higher than almost all of the industrialized world), and unemployment has fallen to 4.4 percent.

Republicans doubled the child tax credit to $1,000 per child. Under the Democrats' budget, in 2011 the credit will revert to $500 per child - a tax increase of $500 per child for American families. The Democrats' budget will more than double the top tax rate on dividends and push the top rate on capital gains back up to 20 percent, even though - according to the Treasury Department - 28 million families saved an average of almost $1,000 each on their 2005 taxes as a result of the current lower rates. [In 2003, Republicans also created a zero percent tax rate on dividends and capital gains for families in the lowest two tax brackets. This provides a powerful incentive for those families to save and invest for the future - an incentive Democrats are not planning to continue.

Last year, over 25 million tax returns had all of their ordinary income attributed to the lowest tax bracket, the ten percent bracket, which was created by the Republican tax cuts in 2001. Under the Democrats' budget, that lowest tax rate would increase by 50 percent.

The Democrats' policy on the estate tax is simply bizarre. Republican tax cuts would eliminate the "death tax" altogether in 2010. But under the Democrats' budget, the estate tax rate will return to 55 percent in 2011. It sounds crazy, but it's true: Under the Democrats' plan, if a small business owner dies on December 31st, 2010, the owner's family will be able to carry on the business without paying additional taxes. But if the owner lingers on through the night and dies on January 1, 2011, the family could owe over half the value of the business to the federal government in taxes.

Not satisfied with passing the largest tax increase in American history, Democrats are also looking for ways to squeeze more revenue out of the American people. Everyone should pay the taxes they owe. That is beyond dispute. But Democrats' efforts to close the "tax gap" between the amount of taxes due and what is paid will result in onerous new rules. The burden could fall most heavily on farmers and small business owners, who have a particularly high rate of underreporting, according to the government.

The reality is that much of the "tax gap" is the result of honest errors. Instead of forcing the IRS to target more ordinary taxpayers, we should be working to make our tax code simpler and fairer. In a recent survey, 80 percent of taxpayers said that the tax code is too complex, and they are right.

The American people have clear priorities when it comes to reforming the way our government taxes and spends their money. According to the same survey, 60 percent of taxpayers said their taxes are too high. Only two percent think they are too low. A different survey asked how the government should increase revenue. By an overwhelming margin - 81 percent to 13 percent - the American people replied that we should increase economic growth rather than raise taxes. Republicans agree with the American people, and we have a record of success. Democrats are offering exactly the opposite: higher taxes, more paperwork, and slower economic growth. So enjoy this Tax Day, because under the Democrats' plan, future ones will be worse.