Jim McCrery has been recognized as one of the most thoughtful members of the United States Congress, focusing on solving America’s challenges by looking past politics of the moment and toward long-term, permanent solutions. Serving his tenth full term in the U.S. House, McCrery represents Louisiana’s Fourth Congressional District, encompassing northwest and west central Louisiana.

Congressional Quarterly has called McCrery an "economic guardian" for his work as Select Revenue Measures Subcommittee Chairman on the powerful House Ways and Means Committee. In addition, the non-partisan magazine named McCrery as one of twenty-eight "emerging players" who will shape Congress’s agenda in the post-September 11th world.

McCrery has concentrated his energies on producing fundamental tax reform, economic growth and making health care more available and affordable. In addition, former Ways and Means Chairman Bill Archer has called McCrery "one of the most knowledgeable members of the House on the issue of welfare reform." House leaders twice called on McCrery to serve on conference committees which resulted in the passage of historic welfare reform legislation. McCrery serves on the Ways and Means subcommittee on Human Resources that has jurisdiction on welfare reform issues.

In the 104th Congress, McCrery focused on preserving the fiscally-troubled Medicare program by co-authoring the Medicare Preservation Act. He served on the exclusive House-Senate Medicare conference committee in the fall of 1995.

Serving on the Ways and Means subcommittee on Health, McCrery plays a major role in shaping our country’s health care policy. During the 106th Congress, he helped write legislation to help seniors cope with the high cost of prescription drugs by providing a voluntary and affordable prescription drug program for all seniors.

In January of 2001, McCrery significantly increased his influence over fiscal and economic policy when he was named Chairman of the Select Revenue Measures Subcommittee of the Ways and Means Committee. As Chairman of this tax subcommittee of Ways and Means, McCrery played a leading role in shaping and passing major tax bills during President George W. Bush's first term. McCrery's subcommittee was also responsible for holding hearings on and fashioning the tax portion of the 2003 Energy Bill.

At the start of the 109th Congress, McCrery was named Chairman to the Subcommittee on Social Security. McCrery plans to reform and strengthen the current Social Security system. He supports personal accounts, a plan that would allow workers to prepare for retirement by using some of their payroll taxes to invest in stocks and bonds. McCrery will also continue to serve on the Health Subcommittee and Human Resources Subcommittee throughout the 109th.

While emerging as a power player in Washington, McCrery continues to work hard on the issues important to Louisiana. A former member of the House Armed Services Committee, McCrery is well-versed on defense and national security policy issues. He has been successful in securing funding for Louisiana’s Fork Polk and Barksdale Air Force Base. He has made the completion of I-49 and I-69 one of his top priorities for Northern Louisiana. In addition, McCrery had legislation signed into law that created the first national wildlife refuge in northwest Louisiana. In 2001, the Louisiana Chapter of the March of Dimes named Jim McCrery as their Citizen of the Year. 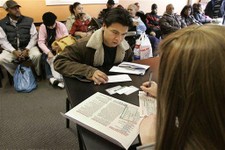