Black was the United States Department of State Coordinator for Counterterrorism with the rank of Ambassador at Large from December 2002 to November 2004. In this role, he was the point person for the U.S. government's international counterterrorism policy in the first term of the Bush administration. Prior to joining the State Department, Black had a distinguished 28-year career in the Directorate of Operations at the Central Intelligence Agency.

Black is the Romney for President Senior Adviser for counterterrorism and national security issues. 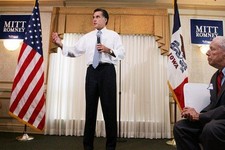