Leave Islam, go to the gallows. That’s still the rule in Afghanistan, as we see in the sad case of Christian convert Abdul Rahman, on trial for his life there. (Michelle Malkin laid out his awful predicament in her column yesterday.) How is this still possible? Debbie Schlussel called the Afghani Embassy to ask that question and they laid the blame at the feet of "Mr. Shinwari, the Chief Justice, who is an old man and an intolerant Taliban remnant."

It’s not the first time the Taliban has threatened Afghan Christians—or Americans—with execution. In late summer of 2001, as Al-Qaeda was planning their murderous venture, the Taliban was spinning their "trial" of eight foreign aid workers, including two Americans, and sixteen Afghan Christians whom they accused of secretly proselytizing—and who, it emerged, faced the death penalty.

How could the Taliban possibly justify such a barbaric practice? They didn’t really even try. According to Canadian Channel CTV, "Their priority was to propagate Christianity which they were not supposed to do here," as Sayed Rehmatullah Hashmi, an aide to the Taliban's foreign minister, told reporters.

But it couldn’t be the same guy. No, Yale’s tame Talib is a "moderate", a man who regrets the harsh things he’s said in his past (if not the ideology he embraced), a poor little lamb who "escaped the wreckage of Afghanistan", an earnest family man starting his life over. Yale’s Hashemi was no blustering theocrat, but according to Yale’s then-Dean of Admissions, "a person to be reckoned with and who could educate us about the world.'' Besides, the spelling is a little different, right? It could be some other Taliban fellow, right?

After all, the spokesman who was justifying the trial and likely execution of the missionaries wasn’t a sweet, thoughtful fellow like Yale’s prize catch. That guy at the press conference was one sick puppy, holding up "evidence" of bloodguiltiness like—gasp—a child’s Bible! That guy even joked about the prisoners’ crimes as he played a videotape seized from an NGO that had employed the captives:

"O.K., turn it on," said Rehmatullah Hashmi, a foreign ministry official. A television set—itself a forbidden thing—brightened into life. A movie called Jesus appeared, its narrator extolling "the good news of the Virgin Mother and the Savior's birth." Soon, a young Jesus was on screen asking precocious questions of startled rabbis. "That's enough," said Mr. Hashmi, who tried some levity to accompany the grave accusations. "We have to put it off. Otherwise, we will also be proselytizing."

Ha, Ha. You might be proselytizing. And then you’d have to be executed, too!

But it couldn’t be the same guy, because that quote came from The New York Times.  And it was The New York Times Magazine article by Chip Brown that portrayed Yale’s Hashemi as a moderate, "disillusioned" with the Taliban. Surely the Times wouldn’t fail to check its own files on the guy, right, and leave out his justification of the Taliban’s religious persecution?

Nah, couldn’t be the same guy. There’s no way he would still be spinning for Osama bin Laden on Sept. 12, 2001 in The New York Times:

In denying that Mr. bin Laden was involved in the attacks in the United States, Rehmatullah Hashmi, a Foreign Ministry spokesman, said, "Amir-ul-Momineen condemns the attack," using another title for the Taliban leader, Mullah Omar, one that means the commander of the faithful. "If we want peace for ourselves, we want peace for others. But such coordinated attacks cannot be carried out by one man or by the Islamic Emirate of Afghanistan."

Couldn’t be the same guy. No way the Times would have left that detail out. And besides, Yale’s Rahmatullah Hashemi was taught English by an international relief organization, the International Rescue Committee, which was originally founded to assist German refugees fleeing Hitler. But this spokesman, in flawless English, is rationalizing the show trials of international relief workers just like the ones that sheltered him during the Soviet occupation. No one could be that viciously ungrateful. 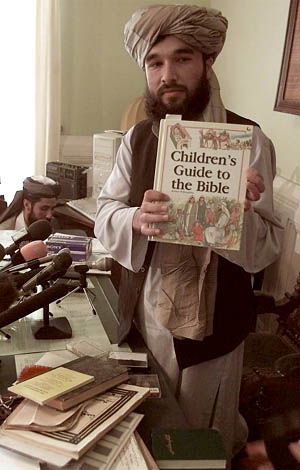 Taliban official Rehmatullah Hashmi, an official from the Taliban's foreign ministry, shows a book conficsated from the International Assistance Mission, IAM. Eight foreign aid workers have been arrested and are on trial on charges of preaching Christianity.

Boola boola, you son of a bitch.

Oh, his picture was in The New York Times, too.

Yale was founded to train Christian ministers in 1701. Since then it has changed, evolving from a liberal-arts college catering to the WASP elite, to a world-class research institution catering to the WASP elite. It’s a good school and I’m glad they let me in. I want it to prosper. But something has gone dreadfully wrong there.  Where the war-cry used to be "For God, For Country, and For Yale", they have managed to betray all of these principles in, apparently, some bizarre rush to compete for trophy admits, good and evil be damned.

Mr. Hashemi is not some pet to be prized for his exotic pedigree. He is an adult who made moral choices—some pretty awful ones, lying and spinning to cover the Taliban’s deeds and its relationship to Osama bin Laden, advising Mullah Omar on how to consolidate his power and achieve his twisted aims, and justifying the trial and likely execution of Christian teachers, who tried to snuff out the very Light and Truth that Yale takes as its motto.

He no more deserves a place at Yale than did Josef Goebbels. It frightens me deeply that Yale, a school that prides itself on educating America’s leaders, cannot recognize that fact.

Nor is Mr. Hashemi some truant, a wayward boy who needs correction for his views.  That is the Taliban’s view of human nature, as demonstrated in this account of the missionary trial in Christianity Today:

According to Pakistan's English daily The News, another 60 or more Afghan children and youth who allegedly were "taught Christianity" by the SNI staff were also detained and sent to Darul Tadeeb, a detention center for minors, to be "re-educated in accordance with the teachings of Islam." Sixty-five young boys were released on August 11, reported Reuters, and their fathers were arrested instead for failing to supervise their children.

It should not be Yale’s view. Yale is not a reform school. It is not, or ought not to be, some Maoist re-education camp where illiberal impulses are squeezed out of incorrect minds. I have no sympathy for the notion that Mr. Rahmatullah deserves a place at Yale to rehabilitate him. He had great power for one so young, and he used it irresponsibly, to further evil ends. He does not deserve another chance.

Abdul Rahman, whose life depends today on the cold mercy of a Taliban judge, does deserve a chance. He needs your prayers, your phone calls, and your earnest support. Some ideas to do so are here, and here. Last time the war suspended the Taliban’s trials, and the prisoners—the foreign ones, at least—were eventually freed.  Mr. Rahman will not have access to that sort of deus ex machina, but the Karzai government may still be pressured into saving him.

When he’s safe, please consider joining the campaign I’ve started, along with a few other Yale alumni, to protest Yale’s admission of the Taliban. Since the misogynist Taliban liked to pull out or chop off the fingernails of women so bold as to wear nail polish, we are urging everyone to send Yale’s President and Development Office red, press-on fingernails to remind them of the Taliban’s brutality. Names and addresses are here, and our ongoing blog tracking this issue is here.

In the meantime, there has never been a more auspicious occasion for Yale and for Mr. Rahmatullah to break their media silence. Gentlemen, speak up on behalf of Abdul Rahman. If you wish to begin formulating an answer to your critics, here is an excellent opportunity to show us you know the difference between good and evil, and still care.