Cliff Stearns was elected in 1988 to the U.S. House of Representative, his only elected office. He was born in Washington, D.C., attended Woodrow Wilson High School there, and then went to George Washington University (GWU). He participated in Air Force ROTC at GWU and was honored as the Air Force ROTC Distinguished Military Graduate. He graduated with a degree in electrical engineering and then started his four years of service in the Air Force.

Serving during the Vietnam War, Stearns worked as an aerospace engineer in satellite reconnaissance. He left the service with the rank of Captain. He worked in the private sector before starting his own business by purchasing a motel. He sold his first property, moved to Florida, and started a successful motel/restaurant business in Ocala and Gainesville.

Well known for fiscal responsibility, Stearns in 2007 is one of only 48 House members to receive an "A" rating from the National Taxpayers Union.

Stearns is the Ranking Republican on the Telecommunications and the Internet Subcommittee. Stearns is active through the Telecommunications Subcommittee in reforming antiquated laws that hinder the development and expansion of new products and services. From 2001 until 2007, Stearns was Chairman of the Commerce, Trade, and Consumer Protection Subcommittee. Leading that panel, Stearns worked to expand consumer protection by enhancing cyber-security, consumer privacy, spyware control, and international trade agreements dealing with telecommunication service agreements. In addition, the House approved the legislation he amended to combat the abuse of spyware, which is software that allows a third party to monitor the computer use of individuals without their knowledge.

President Bush signed Stearns' legislation curbing frivolous lawsuits against the firearms industry into law in October 2005. Currently, Stearns is working in his Commerce, Trade & Consumer Protection Subcommittee on legislation to protect consumers' personal information and to prevent identity theft. In addition, the House approved the legislation he amended to combat the abuse of spyware, which is software that allows a third party to monitor the computer use of individuals without their knowledge.

Stearns is a leading advocate for increasing funding for the VA. For years, Stearns pushed for establishing a VA cemetery in the Jacksonville area, and his proposal was enacted leading to a new VA cemetery set to open in 2009. Stearns actively supports the VA's CARES plan, which calls for a new Regional Health Care Facility in Marion County and expansion of the VA Hospital in Gainesville.

Stearns is leading an effort to give Florida permanent control over its offshore resources after current moratoria on offshore drilling expire. He has championed programs at Central Florida Community College in Ocala, Santa Fe Community College in Gainesville, and the University of Florida in Gainesville, and obtained funding for these schools to expand and enhance their programs. After years of controversy, he forged a consensus among state, local, and federal officials to return the Cross Florida Canal Lands to the state of Florida, resulting in a 77,000-acre greenway and $32 million in repayments to six Florida counties. As the representative for Cecil Field, Stearns actively promotes the expansion of commercial activities at the former base. He is instrumental in gaining grants for converting Cecil and for training students in the Jacksonville area in aviation technology.

Stearns lives with his wife Joan in Ocala; they have three adult sons. He is extremely accessible to constituents. Returning to his home in Ocala often, he has held nearly 500 town meetings across North Central Florida. 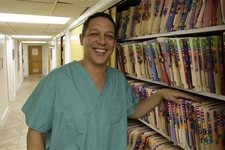