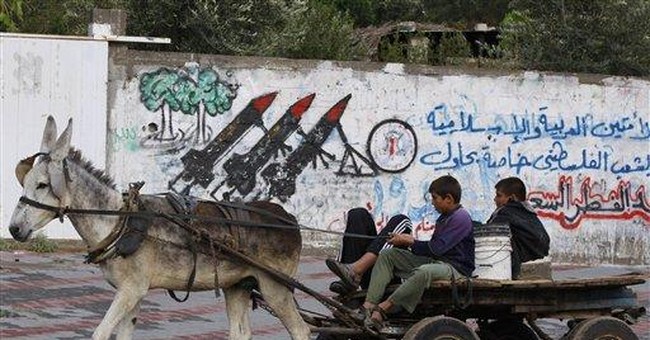 So why is so much attention -- and firepower - focused on this tiny nation? Israel's many enemies and critics say it is because the Jewish state has deprived Palestinian Arabs of a homeland. But Jordan, situated on the three-quarters of historic Palestine lying east of the River Jordan -- from which the country took its name when it was created in the 1920s - is populated, not surprisingly, mostly by Palestinians. As for the royal family that rules there, it was exiled from its ancestral home in Mecca, after the Saudis - a warrior clan subscribing to Wahhabism, a radically fundamentalist version of Islam - conquered the lion's share of the Arabian Peninsula and named it after themselves.

Palestinians also inhabit Gaza, from which Israel withdrew every settler and soldier four years ago. And, under various peace proposals, Israel has offered to remove its citizens from more than 90 percent of the West Bank, a territory occupied in 1967 at the end of a war with Egypt (from which it took Gaza), Jordan (from which it took the West Bank) and other Arab neighbors whose explicitly stated goal was Israel's eradication.

Defenders of Israel argue that it is despised for different reasons, not least because it is an outpost of Western values in a region, the broader Middle East, engaged in a long-term project of religious and ethnic cleansing. One country after another has become inhospitable toward its minorities. As a result, Jews, Christians, Baha'i's and Zoroastrians are among the minority groups that have been eliminated, decimated or compelled to flee to more tolerant corners of the world.

There also is the fact that, economically, Israel punches way above its weight. As Dan Senor and Saul Singer describe and document in a fascinating new book, "Start-Up Nation: The Story of Israel's Economic Miracle," the "greatest concentration of innovation and entrepreneurship in the world today" is found in the Jewish state: a higher percentage of GDP devoted to research and development than anywhere else in the world; more high-tech start-ups per capita than any other country; 80 times as much venture capital investment per capita as in China; more companies on NASDAQ than all of Europe combined.

What's more, Senor and Singer believe the conventional and sometimes stereotypical explanations for this success - e.g. Jews work hard, Jews are smart - are either wrong or insufficient.

An overlooked and key contributing factor, they theorize, is that virtually all Israelis serve in the military where a specific set of skills and values are pounded into them. They learn for example, "that you must complete your mission, but that the only way to do that is as a team. The battle cry is ‘After me': there is no leadership without personal example and without inspiring your team to charge together and with you. There is no leaving anyone behind. You have minimal guidance from the top and are expected to improvise..." The Israeli military encourages a kind of entrepreneurship: the assumption of both responsibility and risk at a young age, coupled with on-the-job experience making life-and-death decisions.

European troops, by contrast, rarely venture onto battlefields and, when they do, as in Afghanistan, too often are instructed to serve as peacekeepers -- where there is no peace to keep. What does that teach?

In recent years, American military men and women have been facing - and overcoming - daunting challenges. Senor and Singer suggest that upon return to civilian life they should not "deemphasize their military experience when applying for jobs," and that employers should recognize the skills and habits that young Americans are now acquiring while fighting for their country and to ensure that freedom has a future.

That is not an argument in favor of war. But war has been both declared against us and thrust upon us. Those who believe otherwise indulge a dangerous delusion. What's more, the inconvenient truth is that war, not peace, has been the norm throughout history. And reports of history's death have been exaggerated.

The "greatest generation" was forged in the crucible of a global conflict. If the global War Against the West produces a second "greatest generation," that will be a bitter defeat for Osama bin Laden, Mahmud Ahmadinejad and all those sympathetic to their medievalist and supremacist ideologies.

America is an exceptional nation. But each generation of Americans must decide whether to assume the burden required to continue that tradition.

Israel, too, is unique: Unlike the vast majority of states born in the second half of the 20th century, Senor and Singer observe, "Only Israel's founders had the temerity to try to start up a modern first-world country in the region from which their ancestors had been exiled two thousand years earlier."

The problem is that in the eyes of much of the world Israel is both a "start-up nation," and an upstart nation. It defies the "international community" by daring to defend itself, and it prospers even while under attack. To many people, such behavior is unforgiveable.