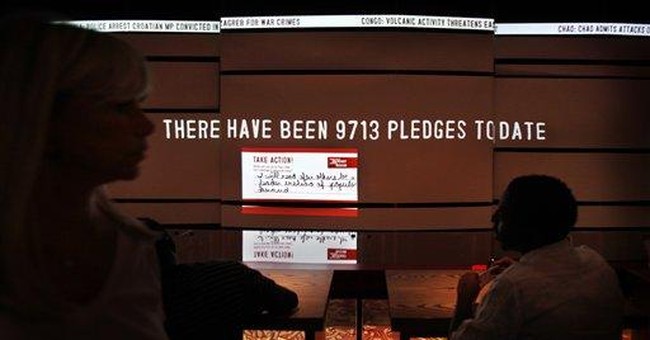 To his credit, Barack Obama, after speaking to the world's Muslims from Cairo last week, moved on to Buchenwald, site of a Nazi death camp. There, standing with Holocaust survivor and Nobel Laureate, Elie Wiesel, he denounced Holocaust deniers and, with solemnity, declared that the world must never again tolerate genocide, that "we must be ever vigilant about the spread of evil in our own time."

So the question should be asked: How will the President of the United States, the world's most powerful leader, translate that poignant poetry into effective policy?

Obama's preference is to deal with these matters diplomatically. But regarding Darfur, diplomacy has been tried for years and found wanting. The Darfuri people are black, and they practice a variety of Islam that does not meet with the approval of the militant Islamist Arabs who rule Sudan.

There are 57 nations in the Organization of the Islamic Conference (OIC). They constitute the most powerful block in the United Nations today. And they side with the regime in Khartoum. Russia and China, members of the UN Security Council, have made investments in Sudan's oil fields and sell arms to Sudan's military. Those interests override any humanitarian concerns. As a result of all this, there is no way the UN would authorize strong measures to save the men, women and children of Darfur.

If Obama is to put an end to the carnage and rapes, the looting and burning of African villages, he will have to act unilaterally or, at best, with Europe's blessing. Michael Ledeen, a former advisor to the State and Defense Departments, now the Freedom Scholar at the Foundation for Defense of Democracies (the policy institute I run), believes the simplest means to improve the situation would be to destroy the relatively small number of helicopters and fixed-wing aircraft used by the Janjaweed, the militia most responsible for preying on Darfurians. This would both cripple its mobility and send a clear signal that there is at least one nation in the world still willing to shoulder what Wiesel calls the "moral obligation to intervene where evil is in control."

As for the militant Islamists ruling Iran, Obama has said it would be "unacceptable" for them to acquire nuclear weapons -- a capability to match their genocidal intentions. Here, again, the UN is rendered impotent by the collusion of the OIC, Russia and China.

The Obama administration is attempting to directly engage Iran's rulers but, so far, the response has not been positive. The president has indicated that he does not intend to hold out his hand indefinitely. If, by the end of summer, Iran's rulers are still enriching uranium and testing missiles, Obama could decide it's time to find out whether tough sanctions can change the mullahs' "cost-benefit analysis," as he has phrased it.

Members of Congress have been working on legislation that would give the White House the power to cut off the gasoline Iran must import to keep its cars, trucks and military vehicles moving. Democrats and Republican, both in the House and the Senate, have introduced measures that would discourage or even prohibit companies from providing refined petroleum to Iran; sanctions could be imposed not just on suppliers but also on shipping companies, brokers and insurers.

If such pressure helps persuade the Iranian theocrats to acknowledge the commitments they have made under the Nuclear Non-Proliferation Treaty and to negotiate in earnest - that would be progress. If not, at least it would become obvious that diplomatic and economic tools are inadequate to the mission, in which case tougher options will have to be contemplated by President Obama and any other world leaders who do not intend to stand idly by and allow another genocide to take place on their watch.