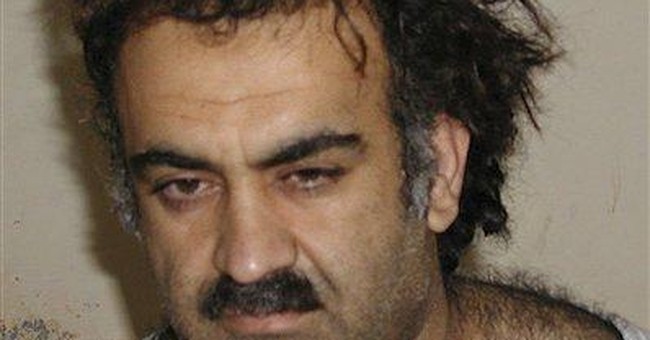 Khalid Sheikh Mohammed was the mastermind behind the terrorist atrocities of Sept. 11, 2001. If U.S. intelligence operatives had spotted him in a remote area of Pakistan, and killed him with a Predator missile, most people would have said: "That's justice."

Instead, of course, KSM was captured in an urban area of Pakistan by U.S. intelligence operatives who then interrogated him -- including through use of the technique known as waterboarding -- thereby leaving him alive and eliciting from him information about other terrorist plots in which innocent Americans had been targeted. Why are so many people insisting that's an injustice, a scandal and a crime for which intelligence operatives and former government officials ought to be prosecuted?

During a time of asymmetrical war, such questions deserve serious debate. But the current administration doesn't appear to have the patience and much of the mainstream media don't seem to have the interest.

President Obama ordered a review of "enhanced interrogation techniques" (EITs) to determine which he would -- and would not -- authorize. Presumably, he'd want to know which techniques are (A) effective, and (B) not so brutal as to rise to the level of torture. But the President's decision to release -- against the advice of his CIA director and four former CIA directors -- top secret Justice Department memos on the interrogation program have rendered that study moot.

On the same day those memos were released, Obama's national intelligence director, Admiral Dennis Blair, told colleagues in a private memo that the now banned EITs did indeed "produce significant information that helped the nation in its struggle with terrorists."

Over the weekend, the Washington Post ran a front-page piece on "ethicists" alleging that psychologists and physicians who supervised CIA interrogations "broke the law and shame the bedrock ethical traditions of medicine and psychology."

Left unexamined was the likelihood that these health professionals had been tasked with ensuring that interrogations did not cross reasonable legal, medical and ethical boundaries, did not reach the point that they would "shock the conscience" which, as former CIA Director Michael Hayden told Fox News' Chris Wallace, is the "American standard" for torture. Hayden added: "You have to know the totality of circumstances in which something takes place before you can judge whether or not it shocks the conscience."

Among the released memos is one from then-Assistant Attorney General Jay Bybee emphasizing that waterboarding "will be stopped if deemed medically necessary to prevent severe mental or physical harm." Another memo makes clear that supervising physicians were empowered to stop interrogations "if in their professional judgment the detainee may suffer severe physical or mental pain or suffering." What's severe? Again, circumstances matter and judgments may differ. Attempting to criminalize such differences is appallingly unethical -- not least when done by people who call themselves "ethicists."

Former Justice Department attorney David Rivkin has pointed out that the EITs described in the memos had been adapted from a U.S. military training program "used for years on thousands of American service members with the full knowledge of Congress." That meant also that there was a large body of information on which to draw regarding both the effectiveness and the physical/psychological impact of the techniques.

What's more, extraordinary measures were taken to protect even the vilest subjects. Al-Qaeda terrorist Abu Zubaydah was slammed against only a flexible wall, with cushioning around his neck to prevent neck injury. In the end, he provided the intelligence used to capture KSM who in turn "yielded critical information" -- according to one of the released memos -- that helped foil additional terrorist plots including a "Second Wave" with Los Angeles as the target.

Terrorists are not criminal defendants with a "right to remain silent." They are not prisoners of war obligated only to recite only name, rank and serial number. They are "not, in fact, people entitled to the protection of the Geneva Convention." Those are the words of Eric Holder, Obama's Attorney General (on CNN, January 2002) who added that had Mohamed Atta "survived the attack on the World Trade Center, would we now be calling him a prisoner of war? I think not. Should Zacarias Moussaoui be called a prisoner of war? Again, I think not."

Reasonable people ought to be able to reach consensus on a few key points: Harsh interrogation methods should be used only as a last resort. They should never be used for revenge, punishment or to force confessions. There should be no torture -- no hot pokers through the eyes, no pulling fingernails out with pliers. But a few nights of sleep deprivation? A few weeks of boredom? Scaring with caterpillars? Such techniques inflict "stress and duress" but they hardly "shock the conscience" -- especially when weighed against what ought to be the much more shocking prospect of letting hundreds, perhaps thousands, of innocent men, women and children be slaughtered.

By all means, let's have a decent respect for the opinions of others. But let's not sacrifice a single American life to score public relations points in the cafes of Europe. Nor should we delude ourselves into believing that kinder, gentler American interrogations will prevent otherwise peace-loving Muslims from signing up to suicide-bomb kindergartens and saw off the heads of captured infidels.

We should fight this war in as civilized a manner as possible -- understanding that this is a war against an enemy who is utterly ruthless and unscrupulous and who should not be permitted to prevail anytime, anywhere.