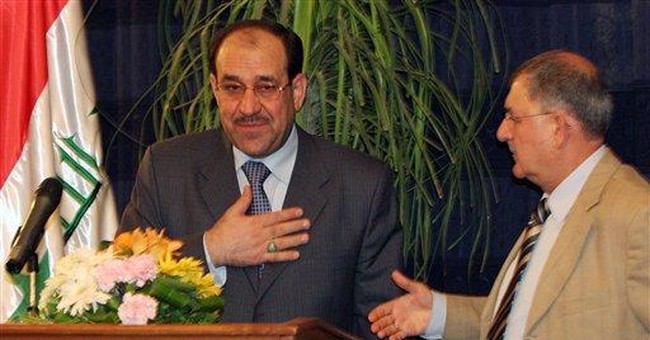 For the sake of argument, imagine that opponents of the war in Iraq are right. Suppose that our military -- designed to confront a different enemy, on a different battlefield, in a different era -- has met its match. Suppose that the war against al-Qaeda in Iraq, as well as against various Iranian-backed Shia militias, can not be won, and that staying on in Iraq can do nothing to protect America’s vital national security interests.

If that’s true, we must prepare for defeat in Afghanistan as well. There is no reason to believe that the strategy being used against us in Iraq will be less effective 1,400 miles further east.

After exiting from Iraq and Afghanistan, it is inconceivable that we would then send U.S. forces into the wild and mountainous “frontier” provinces of northwest Pakistan where Osama bin Ladin has been rebuilding his base. Nor will we be able to exert much pressure on Pakistan’s government to take serious action. Pakistan enjoyed cordial relations with the Taliban and al-Qaeda prior to 9/11/01. Only after that attack, when Americans rose up in anger, did Pakistani leaders decide it would be wise to realign. Expect Pakistan to shift yet again should America retreat in humiliation from Iraq and Afghanistan.

It is probable that Militant Islamists would soon rise to power in other countries as well. Start with Jordan, a nation that already has been attacked by suicide-bombers dispatched by al-Qaeda in Iraq. Move on to Bangladesh. Add Lebanon, too, a fledgling democracy under intense pressure from Hezbollah, Iran’s longtime terrorist proxy.

Gaza is now ruled by Hamas, a terrorist organization supported by both Iran and Sunni extremists in league with al-Qaeda. Its short-term ambition will be to take over the West Bank as well.

Opponents of the U.S. mission in Iraq say they want to “change course.” Most refuse to specify what their new course would be. Others say they want U.S. troops to “redeploy” to friendly countries in the region. But in international relations, nothing cools a friendship like defeat. For any regime to rely on the U.S. for security after the U.S. has abandoned Iraq would be high-risk. In fact, it would soon become apparent that the continuing presence of American forces invites subversion, terrorism and assassination of those in power.

Over time, the only Muslim-majority states to resist the Islamists will be those that accommodate the Islamists. The Europeans, too, will cut their deals.

Israel will hold on – or die trying. You can’t imagine a second Holocaust within a hundred years? Imagine harder.

In this environment, there will be no way to stop Iran from acquiring nuclear weapons. With both Iran and a no-longer-allied Pakistan proliferating nukes, sooner or later it won’t be just nation-states that have them. But our intelligence services are unlikely to be able to tell us with confidence who possesses these weapons of mass destruction or where they are hidden.

The best bet for the U.S. at this point will be “enhanced homeland security” which just means more guards, guns and gates – more check points where you’ll open your bags and take off your shoes. Such measures will work until they don’t – eventually, creative and determined terrorists will figure ways around them.

Since you’ve read this far, it would be unfair of me to leave you imagining only terrible scenarios – particularly since there is something else you may imagine: that the new strategy begin implemented by America’s new military commander in Iraq, Gen. David Petraeus, can succeed and indeed is succeeding.

Al-Qaeda in Iraq is being cut off and killed. Anti-American, pro-Iranian militias are back on their heels. If Petraeus and his troops are allowed to persist, if they are given the time, resources and support they need, the U.S. military presence in Iraq could be reduced – not eliminated -- by this time next year. Iraqi troops would take their place, knowing we will continue to have their backs as they battle our common enemies.

The government in Baghdad probably will still be less effective and less admirable than President Bush had hoped. But, as his critics have noted, he hoped too much and planned too little. Still, the Baghdad government won’t be a sponsor of terrorism – it won’t resemble the anti-American regimes now in place in Tehran, Damascus and Gaza. That will count as an advance for America’s national security – and a serious setback for the Islamist empire builders. Imagine that.