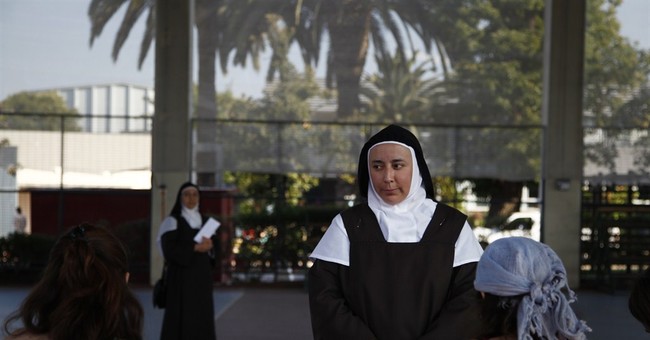 PolitiFact has crowned the promoter in chief's sound bite for Obamacare the "Lie of the Year" for 2013: "If you like your health care plan, you can keep it." And let me make a prediction that among his top 10 falsehood contenders for 2014 will be a reversal of what he emphatically stated back on Sept. 9, 2009: "Under our (health care reform) plan, no federal dollars will be used to fund abortions."

Indeed, just a few months later, he reiterated to ABC News: "I laid out a very simple principle, which is this is a health care bill, not an abortion bill. And we're not looking to change what is the principle that has been in place for a very long time, which is federal dollars are not used to subsidize abortions. And I want to make sure that the provision that emerges meets that test -- that we are not in some way sneaking in funding for abortions."

"Sneaking in funding for abortions," this administration?

Of course, we didn't have to wait a year before we discovered that federal funds were in fact being funneled to provide for abortive services in Pennsylvania and New Mexico.

Then the House and Senate, in secret Sunday sessions, passed an omnibus bill and its provision that overturned the 1988 Dornan amendment, which prevented taxpayer dollars from funding abortions in Washington, D.C. (Tragically, that omnibus bill also appropriated $648.5 million for international family planning funding -- an increase of $103 million over 2009 funding -- and contained funding for Planned Parenthood and for the United Nations Population Fund, both of which have pro-abortion agendas.)

Of course, there have been many other underhanded pro-abortion moves by Barack Obama's administration since then, right down to the present. In fact, last week, LifeSiteNews.com ran a piece by Rep. Chris Smith, R-N.J., explaining abortion's rapid growth and funding in and through Obamacare: "Rollout of the Obamacare exchanges reveals that many health insurance plans will subsidize abortion-on-demand. For example, the preliminary data suggests that every insurance plan on the Connecticut health care exchanges will pay for abortion-on-demand. In the most recent example, we learned that 103 of the 112 insurance plans for Members of Congress and congressional staff include elective abortion coverage. Only nine plans offered exclude elective abortion." (You can go to http://chrissmith.house.gov/uploadedfiles/2013_12-02_floor_flyer_on_member_hc_plans.pdf to view the flier about the nine plans.)

It is clear that there are numerous Obamacare plans that include elective abortion and that billions of taxpayer dollars will be handed out as credits to buy abortion-covering health insurance -- a clear violation of the Hyde amendment's fundamental principle of restricting funds to abortion-subsidizing health insurance plans.

If Obamacare is to encompass the full measure of abortions, Obama knows that he and his cronies must first remove all the stops that prohibit federal funding for the termination of life in the womb. Legislatively, the Dornan amendment was their start. And they will continue to chip away at the Hyde amendment, which prohibits the same through the Labor and Health and Human Services departments -- for example, with Medicaid.

Obama knows that if his pro-abortion agenda is to win the war on the womb, his administration must also oppose anti-abortion advocates, and chief among those warriors is the Roman Catholic Church. You know the White House isn't dumb enough to confront papal power overtly -- yet that doesn't stop it from chipping away at the anti-abortion wall by putting nuns and Catholic contraception views and values in its cross hairs.

On New Year's Eve, just one day before Obamacare's mandate forced nonprofit companies and religion-affiliated institutions across the country to provide contraception and drugs that possibly induce abortions in their employee health care plans, Supreme Court Justice Sonia Sotomayor blocked the requirement for a care facility for the elderly, run by Catholic nuns who appealed to the high court for help.

As NPR explained, "churches and other houses of worship are exempt from the birth control requirement, but affiliated institutions that serve the general public are not. That includes charitable organizations, universities and hospitals."

In response to the nuns' appeal, the Department of Justice placed the Little Sisters of the Poor in an ethical dilemma in which group members must violate their faith or pay fines. The DOJ argued in legal papers filed last Friday that the nuns don't have a leg to stand on. The Obama administration tried to explain that they don't have to offer contraception and abortion-inducing drugs, as long as they sign a government form that delegates the action to a third party. Without signing that "self-certification" form, the nuns would incur steep government fines.

But Mark Rienzi, who is senior counsel for The Becket Fund for Religious Liberty, responded on behalf of the nuns to the DOJ's argument by retorting that government officials "are simply blind to the religious exercise at issue: the Little Sisters and other Applicants cannot execute the form because they cannot deputize a third party to sin on their behalf."

And where is President Obama -- the so-called constitutional lawyer living in our White House -- during the whole debate? Coming out to protect the Bill of Rights for the nuns as he has for a number of progressive minorities? No. He's hiding behind the curtains in the Oval Office, manipulating his minions to follow his pro-abortion biddings.

It is not known when Justice Sotomayor will rule on these ludicrous government actions and violations of the nuns' personal religious liberty and practice. But one thing we do know is that the Founding Fathers are rolling in their graves right now regarding the government's obliteration of our First Amendment religious rights: "Congress shall make no law respecting an establishment of religion, or prohibiting the free exercise thereof."

What an utter constitutional and leadership travesty it is that Obamacare's promoter in chief repeatedly is breaking this promise: "Under our (health care reform) plan, no federal dollars will be used to fund abortions."

Seeing as our president won't honor life in the womb, please write or call your representatives to let them know where you stand. Read and hand out my friend Randy Alcorn's book "Why Pro-Life?" (http://www.epm.org). And then ensure your local community of faith is honoring Sanctity of Human Life Sunday on Jan. 20. The day commemorates the Jan. 22, 1973, Roe v. Wade U.S. Supreme Court decision, which legalized abortion in our country. Since then, more than 55 million abortions have taken place in the U.S.

I will follow up next week on Sotomayor's next action and where this case goes.

Watch: Irate Japanese Official Suggests a New Name for WHO

Infectious Disease Specialist Tells Fox News: ‘This is the Beginning of the End of the Pandemic’
Redstate
AOC: Cuomo's plan to suspend mortgage payments is racist
Hotair