What if Assad Wants the US to Bomb Syria? 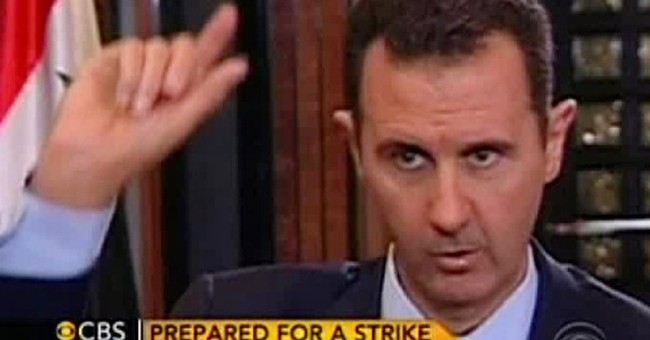 Trending
While President Barack Obama and Congress pontificate over whether Syrian President Bashar Assad used chemical weapons on his own people and whether a limited U.S. attack on Syria would be justified, what Washington needs to realize is this: Assad launched sarin on its citizens in hopes of moving the U.S. like a chess piece into his civil war and deeper onto the Middle East war map.

According to New York University political scientist Alastair Smith, Assad's use of chemical weapons is in reality "a brilliant play internationally" on the global field of politics and power -- if, of course, you're viewing it from the psychotic dictator's position.

Smith and Bruce Bueno de Mesquita co-authored "The Dictator's Handbook: Why Bad Behavior Is Almost Always Good Politics," which is an examination of why autocrats do what they do.

Joshua Keating, staff writer for Slate, recently talked to Smith and reported that "he thinks (Assad's) use of chemical weapons was a risky but shrewd move that had less to do with punishing the rebels than with sending a signal to his core supporters -- predominantly members of the Alawite religious sect -- and his most important international allies."

In his own words, Smith elaborated: "First of all, using chemical weapons has absolutely cemented that for Assad there can be no soft landing. That has two effects: Domestically, it has signaled to his coalition that they should stick with him. He's there for the long run and there's no easy way out for him, so they know he won't desert them. These crimes against humanity have also made ... very clear that it's going to be very bad for the Alawites if there's any political transition, which makes them even more loyal to him. They have nowhere else to go."

Smith added: "It's also been a brilliant play internationally. The extent of the chemical weapons has not been so much that Obama's willing to put ground forces in. The airstrikes they are discussing are unlikely to be a decisive military factor. And Russia and Iran would love to snub the nose of the U.S., and this is a perfect way to do it. The U.S. is going to have to go it alone if they do it, and this is a great way for Russia and Iran to make the U.S. look impotent and pathetic. Russia's going to continue supplying (Assad) with weapons, and Iran's going to keep supplying him with money. So this was actually a brilliant play from him."

The problem in this Syrian saga is that the White House isn't examining the situation according to power paradigms of dictators -- particularly Assad. It is responding to it according to the typical model of Western imperialism, and Assad knows it. That's why he continues to play to his theater and taunt Goliath by poking his chest with words such as "Obama is weak."

Herein lies the rub. On Saturday, BBC ran a story titled "Syria crisis raises question of US role in the world." According to the article, "in the details of the debate over Syria, the biggest questions and the larger picture are in danger of being lost. In essence, it's whether the world needs a super cop. And whether the US should simply assume that role."

If I were one of our lawmakers, I would emphatically tell the president: Quit taking the bait! If all the evidence about chemical weapons points straight to Assad's front door, that doesn't mean we check in our brains at the door of war and bow down to a Middle Eastern dictator's mindset.

Proof of the president's shortsightedness can be found in his naive strategy of a "limited" military campaign in Syria. What a joke and mockery to any opponent and to any rational mind! What professional fighter says, "I'm going to go into the ring and throw a series of blows and then get out"? Does the opponent have no bearing on countermeasures? You can't limit an attack when you're kicking hornets' nests or throwing matches on gasoline!

And it's not merely Assad waiting in the ring to counter the U.S. hits but also Iran, Russia, Hezbollah, Hamas, al-Qaida, et al. And with our ally Israel -- which already is hated by most -- in the region, there's no telling the outcome. It is no exaggeration to say that a single, unilateral U.S. strike on Syria could spark fires that lead to the inferno of World War III.

Obama needs to ratchet down his and his Cabinet's need for speed in this Syrian matter, review the entire matter from Assad's autocratic mindset, seek counsel from the greatest experts on the Middle East and then refuse to engage in action in Syria without congressional and international support. Only then should the coalition decide on the best course of action against Syria -- whether that's a multinational attack on various hot spots or further arming and enabling pro-democracy resistance groups in the country or utilizing some covert actions against the regime that the world never connects to the U.S. or the international community.

The president already has confessed that the Syrian mission is "not time-sensitive" and that Assad's actions pose "no imminent, direct threat" to the U.S. The only threat there is for the U.S. at this point is to the president's pride, ego and willingness to humble himself for the sake of our military, our country's future, our standing in the world and especially our not getting entangled further in Middle Eastern affairs.

As a six-time world karate champion, I know something about fighting, winning and losing. Sometimes one has to lose a battle to win a war, if only in appearance before certain others. And the truth is, Mr. President, sometimes you win, and sometimes you learn. My advice is to learn it now before it's too late for all of us.

Assad placed Obama (and, hence, America) in checkmate when he launched chemical weapons upon his people. The temptation is to blow up his chess pieces. But the right and wise move is to step away from the table, quit playing his game and form our own.

The Syrian crisis is all the more reason to call up America's spiritual reserves by observing the Day of Prayer and Repentance on Sept. 11. You can register your intent to participate and help spread the word by going to http://911dayofprayer.com. And on Sept. 12, join thousands of businesses across the U.S. in showing appreciation for U.S. military forces by providing free goods and services. To see a complete list of offers from business participants in your state, go to http://www.freedomdayusa.org/participating-businesses.html.