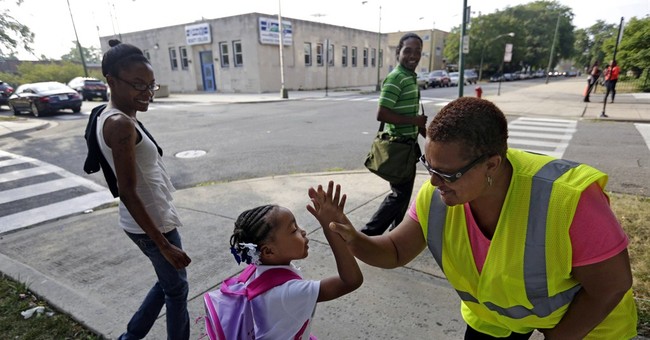 Trending
In the first two parts of this series, I showed how Thomas Jefferson valued education as the tool to ensure our republic's perpetuity and Americans' "Life, Liberty, and the Pursuit of Happiness." But today's public education system isn't exactly what Jefferson had in mind for his academic reformation.

Yes, Jefferson imagined schools as places that teach a broad range of academic basics, such as reading, writing, arithmetic and history. But that's about the extent to which Jefferson would agree with our elementary and high schools.

For Jefferson, there were three stages of academia. The first was elementary or pre-grammar schooling. The second was grammar school ("for teaching Greek, Latin, geography, and the higher branches of numerical arithmetic"). And the third was the university.

But Jefferson -- as well as most of the other Founding Fathers -- couldn't ever imagine that public education would be controlled by the federal, much less a state, government. He believed that it should be run and funded by parents and those in local communities or wards.

In 1784, Jefferson proposed a bill in Virginia that outlined his thinking for a public education system. In it, he planned to divide "every county into small districts of five or six miles square ... and in each of them to establish a school for teaching reading, writing, and arithmetic."

As late as 1816, while still trying to enact his educational plan, Jefferson wrote to Sen. Joseph C. Cabell about the sheer folly of states running the educational system: "If, however, it is intended that the State government shall take this business into its own hands, and provide schools for every county, then by all means strike out this provision of our bill. I would never wish that it should be placed on a worse footing than the rest of the State. But if it is believed that these elementary schools will be better managed by the governor and council, the commissioners of the literary fund, or any other general authority of the government, than by the parents within each ward, it is a belief against all experience."

Jefferson argued for the founding of "each school at once under the care of those most interested in its conduct." Each elementary school was to be supervised by local parents and peers who were passionate to ensure children's education, which included the selection and oversight of teachers (tutors), as well as their salaries. And those who couldn't afford their children's tuitions would be covered, at least in part, by those who could assist them.

Regarding the most basic, or elementary, education, Jefferson proposed that "every person in it (be) entitled to send their children three years gratis, and as much longer as they please, paying for it." And from there, parents would continue to pay for advanced education, too. (Jefferson's basic parental fiscal philosophy was: If you bring them into the world, you pay for them until they are responsible enough to pay for themselves.)

Of course, Jefferson's proposal for public education wasn't perfect. Even he reflected some of the educational biases of his day. Chief among them was his view on limited education for women and slaves. But that doesn't mean that he would have opposed their complete education in a more liberating era.

In fact, according to the Library of Congress, Jefferson wrote to Quaker Robert Pleasants and advised that slaves should have a system of education based upon his 1784 plan for public education in Virginia as one step in preparing those who were "destined to be free" under our new republic.

In addition, for Jefferson's own daughters, he believed it was "essential to give them a solid education which might enable them, when become mothers, to educate their own daughters, and even to direct the course for sons, should their fathers be lost, or incapable, or inattentive."

I'm not proposing that we follow every jot and tittle of Jefferson's proposed educational system. However, I do believe we would be well-served by adopting some of his basic educational philosophies, such as returning complete educational autonomy to parents and experts in local communities. Overreaching educational laws and programs -- such as No Child Left Behind -- centered in Washington and even state capitals have only multiplied bureaucratic red tape, tied the hands of parents, administrators and teachers, and relinquished school funding and choices (including textbooks) to the power and pocketbook of special interest groups.

In Part 4, I will address possibly the most controversial aspect of Thomas Jefferson and public education: Did he advocate and expect only a completely secular education for the public?