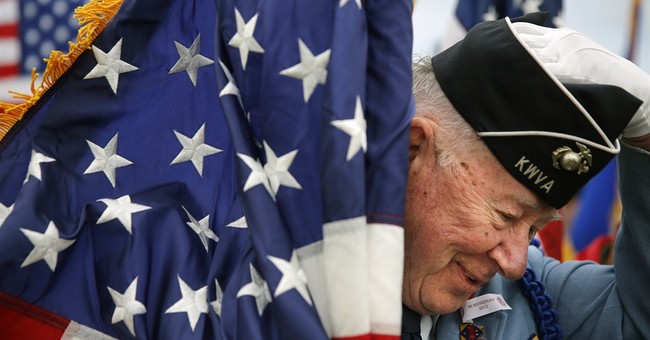 I recently read a great story about the oldest living American veteran. And then it made me think about my brother Wieland, who gave his life in Vietnam.

Last Friday, Fox News reported that Richard Arvine Overton, a World War II Army veteran, would be commemorating his 107th Memorial Day from the front porch of his Texas home, which he built after coming home from World War II.

Overton was born May 11, 1906, the same year as the big San Francisco earthquake. He will shortly become a supercentenarian -- someone who is 110 or older, an achievement that only an estimated 200-350 people in the entire world have obtained. He married twice over nearly 12 decades on earth but never had any children.

But if you think sitting on his porch is all Overton does to bide his time, consider that Overton just traveled to Washington to see the National World War II Memorial. (His trip was provided by Honor Flight Network, a nonprofit organization that gives veterans free trips to memorials erected in their honor.) He served in the South Pacific from 1942 through 1945, with time also spent in Hawaii, Guam, Palau and Iwo Jima.

Regarding his recent trip to Washington, Overton told Fox News: "At my age and my strength, I'm able to stand up and do anything. My mind is good, so I'm able to do what I want." He added, "I got good health, and I don't take any medicine."

I doubt that it's his dozen-a-day cigar habit or the splash of whiskey in his morning coffee.

He credits his old age to taking daily aspirin and keeping his stress low. And he keeps his body moving.

He said: "I also stay busy around the yards. I trim trees, help with the horses. The driveways get dirty, so I clean them. I do something to keep myself moving. I don't watch television."

Beyond these things, Overton maintains his spiritual health by faithfully going to church every week.

Austin Mayor Lee Leffingwell told Fox News in a statement: "I've spoken with Mr. Overton on a few different occasions, and admire his spirit for life and his country. He is truly one of our unsung heroes and we are privileged that he calls Austin his home."

I join Leffingwell and millions of other Americans each Memorial Day in saluting all of America's heroes. And I know Overton joins us in particularly giving thanks for the freedom fighters who sacrificed everything for our country, including my dear brother Wieland, who paid the ultimate price June 3, 1970.

My father fought in World War II at the Battle of the Bulge. I served four years in the Air Force in South Korea, and my brother Aaron served in the Army there, too. And our brother, Wieland, was killed in action in Vietnam when he walked point alone and drew out enemy fire so that others in his platoon could fight their way out to freedom. Many souls were saved on that day because of my brother's bravery. (My mom wrote a chapter on each of us and, for the first time, told Wieland's war story at length in her autobiography, "Acts of Kindness: My Story," available only at http://www.chucknorris.com.)

Here are the numbers of those who sacrificed their lives in major wars since the Revolution:

Like so many other members of our armed forces, Overton witnessed many of his military friends die in the line of duty during World War II. Then, down through the years, he had to say goodbye to a host of others.

Overton said this past week: "I know I had someone from my platoon until recently, but he passed, so now I don't have anyone that I know. So I feel lonesome by myself sometimes. I would love to ask some of them some questions, but nobody is here. Everybody's passed."

Though I understand Overton's sentiments about his fallen comrades, not a single veteran should ever feel alone, because they all should be surrounded always by those who admire them.

On behalf of millions of Americans, my wife, Gena, and I salute Richard Overton and all of America's veterans, pray for those active in service and humbly bow in thanks for our fallen military heroes, who gave their lives so that we might live ours.

Please mark your calendars on Sept. 12 and participate in Freedom Day USA, when businesses across the country will show their appreciation for U.S. service members by providing free goods and services to them and their immediate families.