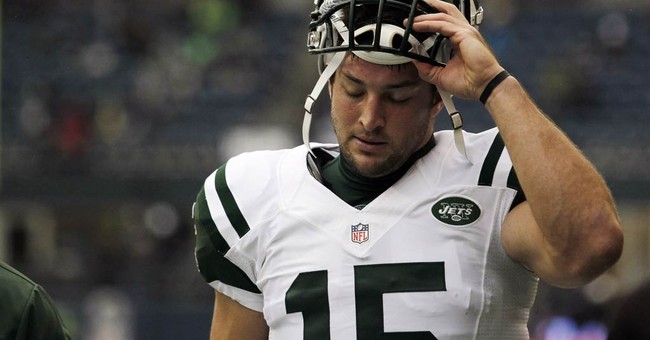 America has the UFC (Ultimate Fighting Championship) and the UCP (ultimate clutch players). One is mixed martial artists, and the other is quarterbacks of the NFL. They all are athletic warriors who are extremely determined to win.

I know what you are thinking: Tebow has been in the NFL for only three years. True, but Tim's 2011 season with the Denver Broncos was one of the most remarkable in football history.

What sportsman ever could forget how that amazing second-year QB came back from a 15-0 disadvantage to the Miami Dolphins to lead the Broncos to an 18-15 overtime victory and then led Denver to six wins in its next seven games and into the playoffs, beating the highly favored Pittsburgh Steelers in a wild-card game? It was the Broncos' first playoff victory in six years.

I have been following Tim since he became a QB for the University of Florida Gators, and I never have seen a more determined or inspiring athlete to play the game of football. And I'm not alone in that sports assessment.

Akbar Gbaja-Biamila, an analyst for NFL.com and NFL Network, explained in his article "Tim Tebow's history as a proven winner should not be ignored": "Training camps are still a few months away, and already, every team in the NFL has made a major mistake: They've overlooked the winning record of Tim Tebow. ... Pundits have tried to erase the success Tebow had in 2011 with the Denver Broncos, but make no mistake: It all happened. He did mount multiple fourth-quarter comebacks and notch four overtime victories; he did rush for 118 yards and throw for two touchdowns in one game; he did complete 66 percent of his passes and throw for two touchdowns in another. ... In the locker room, we had a word to describe that kind of personal highlight reel: ballin'."

Forbes just released its 2013 list of the most influential athletes, and Tim Tebow leads the pack, with the No. 1 ranking; the next football player on the list is Peyton Manning, at a distant fifth. The only other NFL players on the list are Drew Brees (No. 6) and Aaron Rodgers (No. 8).

I've heard the critics say Tebow has poor technical skills, but the truth is that Tim is a natural leader, an amazingly gifted football player, an inspiration to his team and the possessor of intense determination and strategy to bring any team to victory -- no matter what the odds. One can improve technique, but leadership is innate. That is why I believe that Tebow could be a superstar and legend in the NFL.

Tebow is a player who rises to the occasion and delivers big in critical moments. He reminds me of myself when I used to compete in martial arts. I would spar with my black belts in class, and sometimes they would outscore me. Yet in the tournaments, I would defeat them. My students used to ask me, "Why is it that we can contend equally against you in class but can't beat you in the tournaments?" My answer was always the same: "When it counts, I rise to the occasion."

The same is true of the former Heisman Trophy winner: When pressure mounts and the game is on the line, Tim's turbo turns on. It has been said, "If a quarterback came through with a clutch, final-minute victory, he pulled a 'Tebow.'" And that is why he is the ultimate clutch player.

I believe we have just begun to see what Tim is capable of doing as one of the best among the NFL's UCP. But a team must play him and let him lead as the Broncos did. No warrior can prove his worth if kept from the battlefield.

So what team do I feel should give Tim the opportunity to excel as a quarterback and usher it to Super Bowl status?

My present pick would be the Jacksonville Jaguars.

Why? To put it simply, it's because Tim could help turn that mediocre team into a championship one. Tebow works miracles on the field, and his inclusion would embolden the spirit of the Jaguars' players and fans.

Plus -- and this has no reflection on the current quarterbacks -- Tim is from Florida, where he bears a victor's legacy and an extensive fan base, to boot, from his days with the Gators, whom he led to two national championships and with whom he became the first sophomore ever to win the coveted Heisman Trophy.

So Shad Khan, who is the owner of the Jacksonville Jaguars, David Caldwell, who is the team's general manager, and coach Gus Bradley should give the preceding some serious thought. Whatever you would pay Tebow would be recouped tenfold by the increase in attendance and the fan base. With Tim as the QB for the Jacksonville Jaguars, the team would add thousands (if not tens of thousands) of additional fans to the stadium, including me -- even though I don't live in Florida!

Only one thing stands in the way, as Gbaja-Biamila wisely retorted: "Here's the truth as I see it: Many coaches let pride or fear of media and fan scrutiny affect the decisions they make about star players."

But I was reading a USA Today article last week titled "Trailblazer Shad Khan should set course for hirings." It reported that Khan, as the first minority owner of an NFL franchise, often cites Martin Luther King Jr.'s work as a contributing factor to his success.

So let me respectfully challenge Khan to consider these words from Dr. King: "There comes a time when one must take a position that is neither safe nor politic nor popular, but he must take it because conscience tells him it is right."

All that is needed now is for the management of a football team to have the vision and faith to watch Tebow turn around the team. I guarantee they would see positive results. I have been an athlete all my life, being a six-time undefeated world middleweight champion in the martial arts, and I know a winner when I see one.

Tim Tebow is a winner -- plain and simple!