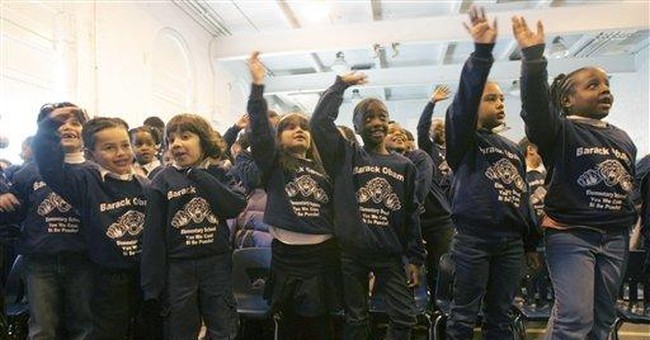 Why should liberals want to change the public educational system when it is turning out the product they have been striving for years to produce?

Check out these real news headlines from the past several weeks and months about the state of public education across the country:

--"No opting out of pro-gay school propaganda"

On Dec. 27, 1820, Thomas Jefferson wrote about his vision for the University of Virginia (chartered in 1819): "This institution will be based on the illimitable freedom of the human mind. For here we are not afraid to follow the truth wherever it may lead, nor to tolerate any error so long as reason is left free to combat it."

But what should happen 200 years later when our public schools and universities avoid the testing of truths? Or suppress alternative opinions because they are unpopular or politically incorrect? Or no longer tolerate opinions now considered errors or obsolete by the elite? What happens when socio-political agendas or scientific paradigms dominate academic views to the exclusion of a minority's even being mentioned?

What happens when the political and public educational pendulum swings from concern for the tyranny of sectarianism in Jefferson's day to secularism in ours? What happens when U.S. public schools become progressive indoctrination camps?

Dr. Jim Nelson Black, founder and senior analyst of Sentinel Research Associates, wrote "Freefall of the American University," which is an excellent book. In it, he documents the clear biases pervading our public academic settings. Among that lopsidedness is the intentional training of students to disdain America, freely experiment sexually, forcefully defend issues such as abortion and homosexuality, and become cultural advocates for political correctness, relativism, globalization, green agendas and tolerance for all.

One of the primary ways these educative platforms are spread is by recruiting and retaining faculty members who reflect and teach them. For example, citing the polling firm Luntz Research, Black notes that 57 percent of faculty members in our most esteemed universities are Democrats (only 3 percent are Republican), and 64 percent identify themselves as liberal (only 6 percent conservative). Moreover, 71 percent of them disagree that "news coverage of political and social issues reflects a liberal bias in the news media." They also were asked, "Who has been the best president in the past 40 years?" The No. 1 answer was Bill Clinton. (Only 4 percent said Ronald Reagan.)

This is why it is no surprise that the two largest teachers unions, the National Education Association and the American Federation of Teachers, are the largest campaign contributors in the nation (giving more than the Teamsters, the National Rifle Association or any other organization) and that 90 percent of their contributions fund Democratic candidates. So do you think such funding is going to balance traditional and conservative values with liberal ones in public schools?

The impact of progressivism is being experienced by students across this land, hundreds of thousands of whom already have cried out with complaints of academic inequity. A sampling of the hundreds of student grievances from across the academic spectrum can be found on Students For Academic Freedom's website.

It is also no surprise that an average of 6,000 students every year are leaving the approximately 94,000 public schools in America. If the powers-to-be over our public schools, such as government and unions, continue to oppose conservative curricula and impose overarching liberal educational revisions and laws, public schools will continue to experience an exodus.

I fully realize there are some great conservative people on the staffs of many public schools and universities, but I know that virtually all of them would concur that a liberal bias in our academic curricula and system is overwhelmingly dominant and ubiquitous.

Is this present restrictive and one-sided educational environment that which Thomas Jefferson and other Founders intended for the future generations of America? Absolutely not! Rather than encourage freethinking, the U.S. academic system has turned Jefferson's plans for open education into our culture's system of indoctrination.

(In Part 2, I will give eight specific ways that you and I can fight progressivism in the U.S. public education system. And speaking of education, I'm encouraging readers of my culture warrior column to read my new weekly health and fitness column, "C-Force." This past week's edition is about conventional and alternative medicine, and I explain the amazing benefits of the Sierra Integrative Medical Center in Reno, Nev.)