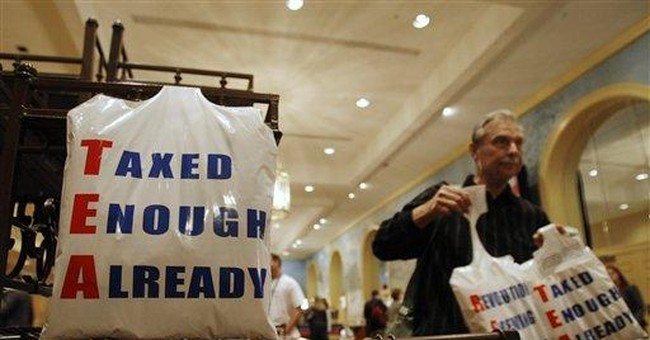 It's still difficult to believe that last week, President Barack Obama actually celebrated Feb. 17 as the anniversary of his stimulus plan (aka the American Recovery and Reinvestment Act of 2009), in which Washington borrowed $862 billion on American taxpayers' credit. Celebrate the piling of roughly $1 trillion on the backs of our posterity? Call me clueless, but I never have considered easing present circumstances by going into a massive amount of debt as an answer to anyone's economic recovery and longevity.

But I bet there's one date the president definitely won't be celebrating: Feb. 27. This Saturday marks the anniversary (or first birthday) of the Tea Party movement.

To think that last year at this time, the mainstream media and Washington politicians were either completely overlooking them or labeling those patriot gatherings as extreme and wacky fringe resistances. WorldNetDaily was virtually alone in reporting the Tea Parties as a legitimate patriotic movement like the original 1773 protest in Boston Harbor.

Today, just one year later, Tea Party patriots have proved themselves as a collective and formidable force and foe against big government power and corruption. Even according to the latest CBS News/New York Times poll, roughly 1 in 5 adult Americans identifies with the Tea Party movement.

Tea Party patriots cross all partisan lines. What unifies us is our fundamental belief that what America's Founding Fathers established was good and right, that we've largely abandoned their vision and that the only recourse to reawaken America is to return to their principles and values. But that is easier said than done, as progressives have worked double time to discredit and undermine them and the very pillars of their republic.

A few years back, an editor at The New York Times wrote, "The Founding Fathers were paranoid hypocrites and ungrateful malcontents." He's not alone. Many liberals in media and higher education share his sentiments, labeling our Founders as racists, bigots, chauvinists and charlatans, among other things. This is not only ungrateful but also wrong. It's their contributions, not their character flaws, that we should be highlighting. As Samuel Adams said in 1771, "Let us first see it prov'd that they were mistakes. 'Till then we must hold ourselves obliged to them for sentiments transmitted to us so worthy of their character, and so important to our security."

America's greatest problem is that we have forgotten our roots. Too many of us don't know or don't feel connected to those who founded our country.

Case in point, in 2007, a national survey commissioned by the U.S. Mint found that only 30 percent of Americans knew that Thomas Jefferson was our third president, and only 7 percent could name the first four presidents in order. If you're a part of the 93 percent, you should know that they were George Washington, John Adams, Thomas Jefferson and James Madison. The fact is most Americans don't have a clue why our Founders created this country, what principles motivated them or why they framed our Constitution the way they did.

To restore America, we need to reclaim our past and learn from it. It is only by turning back and examining our beginnings that we can reawaken -- or, if you will, reboot -- our country. So if, like most people, you're a little rusty on the Constitution and the Bill of Rights, here's a quick primer or reminder of what our government was meant to be -- and should be.

In 1776, by an act of the Second Continental Congress, the original 13 Colonies adopted a Declaration of Independence, dissolving their relations with England. America would be a confederation of independent countries ("states"). In 1777, the Articles of Confederation (our first constitution and governing document) was written and adopted by the Second Continental Congress, though it was not ratified until 1781. The Federalists soon recognized the deficiencies in the Articles of Confederation, so they called for the Constitutional Convention of 1787 in Philadelphia. By the end of their four-month convention, the United States Constitution was adopted, though it was not ratified completely until 1790. It has been amended 27 times since. (The first 10 amendments constitute the Bill of Rights.)

The Framers set out a path for us, and we've strayed from it. And the first thing any rational man does when he's lost his way is to look at a map. If you think, as I do, that America has taken a wrong turn, studying America's Revolutionary history is the first step to helping us find our way back -- just as millions of Tea Party patriots have done already.

Happy first birthday, Tea Party movement! If participants in the Boston Tea Party of 1773 laid the groundwork for the Declaration of Independence just three years later, imagine what impact you can have by the time you celebrate your third birthday.

To find a Tea Party birthday celebration in your area this Saturday, Feb. 27, check out the various gatherings under "events" at TeaParty.FreedomWorks.org.