Our Commander in Chief's Christmas Crisis 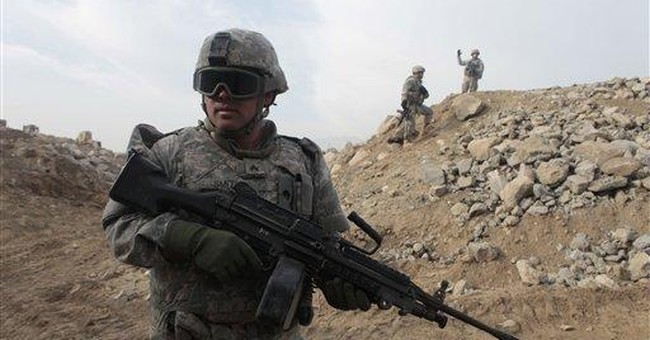 Alas, after nearly three months of military deliberations, our commander in chief finally is coming out of the closet with his Afghan strategy. But is his plan based more upon politics than it is upon national security?

A big question that keeps coming to our minds is: How is it that President Barack Obama fast-tracks borrowing, bailouts and Obamacare but is slower than molasses when it comes to decisions regarding the military -- especially this one, seeing as he basically is returning to Gen. Stanley McChrystal's 3-month-old solution?

Some answer that military decisions are more complicated -- more life and death at stake -- and warrant the delay. But I genuinely believe Obama's nearly three-month delay reflects both his leadership deficiencies and a quandary that he cannot appease the left and simultaneously fulfill his campaign promise that he would "make the fight against al-Qaida and the Taliban the top priority that it should be."

As I shared over a year ago while Obama was still on the campaign trail, a professional leadership and personality profile was completed on him that revealed that he implodes when in jams that require quick or solo decisions under pressure. St. John's University and the College of St. Benedict's Unit for the Study of Personality in Politics did this test "for anticipating Obama's likely leadership style as chief executive, thereby providing a basis for inferring the character and tenor of a prospective Obama presidency." The study concluded:

"The combination of Ambitious, Accommodating, and Outgoing patterns in Obama's profile suggests a confident conciliator personality composite. Leaders with this personality prototype, though self-assured and ambitious, are characteristically gracious, considerate, and benevolent. They are energetic, charming, and agreeable, with a special knack for settling differences, favoring mediation and compromise over force or coercion as a strategy for resolving conflict. They are driven primarily by a need for achievement and also have strong affiliation needs, but a low need for power."

Did you catch the part about "favoring mediation and compromise over force or coercion as a strategy for resolving conflict"? This type of personality might be good for mending relations, conveying the warm fuzzies and closing a used-car deal, but it is absolutely not a positive trait for a commander in chief -- who must lead through emergency conflicts, which often require unpopular actions. In a time of war, a commander in chief often doesn't have significant time to ponder and reflect; such a delay costs lives and impedes progress, which are exactly the prices we've paid over the past few months.

Long forgotten by most but a haunting reminder to me at the moment are the campaign trail words of three leading Democrats. Obama's own vice president, Joe Biden, said last year about the president's preparation for office: "Right now, I don't believe he is (prepared). The presidency is not something that lends itself to on-the-job training." And before Obama was her party's choice, Hillary Clinton repeatedly accused him of being an indecisive waffler. And former President Bill Clinton dodged giving an affirmative answer to an ABC correspondent when asked whether Obama was ready to be president, by saying, "You could argue that no one's ever ready to be president."

This much I know: We should either unleash the full potential of the U.S. military on Afghanistan to complete the mission as quickly as we can or pull out altogether and bring our service members home to U.S. soil and their families.

President Obama, please quit trying to please everyone. Help our troops on the ground overseas; complete this mission, or get them out of Dodge!

Most tragically, the real aftermath of the White House delay has been a record number of U.S. fatalities in Afghanistan -- the highest total in a six-month period in the eight years of this war. There were 24 in June, 44 in July, 51 in August, 37 in September, 59 in October and 17 more in November.

Is any political or military delay worth the death of one of those courageous warriors? Could all the corporate bailouts together value more than just one of those lives? No need to rush a decision? Are you kidding me?! Why haven't the left and lame-stream media been crying out over the past few months against these war casualties the way we all did when former President George W. Bush was in office?

Let us all pray this Christmas season for the U.S. forces and the families of all the fallen freedom fighters.

God help our president. God help the Afghan people. God help us. God especially help our troops. (I highly recommend that as Obama's Afghan strategy is sent out and received by our military personnel, we all -- with our kids or grandkids -- simultaneously send some form of encouragement to our troops, whether it's a Christmas care package through Give2TheTroops.org -- the deadline for which is Dec. 5 -- or a free Christmas card sent via LetsSayThanks.com.)