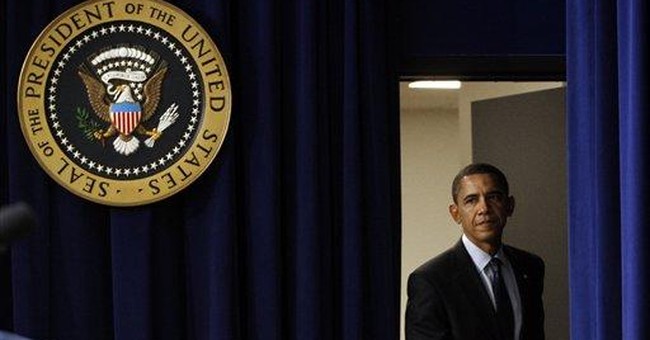 Abraham Lincoln once said, "Those who deny freedom to others deserve it not for themselves."

But what if those who restrict our freedoms are the very people who are in charge of securing them?

Over just the past year, Washington has worked double time to limit your liberties, despite the fact that such reductions have been cloaked under the guise of governmental progress.

First and foremost, Washington has reduced our freedoms and restricted our future by heaping upon our posterity astronomical amounts of debt, trying to jump-start the credit circus in our economy. Despite borrowing $787 billion from China to stimulate the economy with a promise to cap unemployment at 8 percent, unemployment has climbed to 10.2 percent and shows no sign of decreasing. And right now, a record 14 percent of homeowners are either in foreclosure or behind by at least one mortgage payment.

Because of Washington's excessive spending, bailouts and borrowing, the value of the dollar has decreased, which has restricted our financial freedoms further. Since just March 2009, the U.S. Dollar Index, which measures the strength of the dollar against other major currencies, plunged more than 15 percent, making U.S. stocks cheaper for foreign investors.

Washington also is reducing our medical choices or freedoms, by mandating a government option upon all of us.

Despite the biggest economic recession since the Great Depression, like a ramrod, Washington believes it's also a good time to force another $1 trillion on American taxpayers, by providing another governmental entitlement, called universal health care. In so doing, Washington is reducing our financial freedoms further and slowing future economic recovery by placing even more increased debt and taxes upon all of us.

To add insult to injury, Washington is going around the backdoor to provide illegals with universal health care by seeking their amnesty. That means Americans eventually would pay for another 14 million people's government health care. Amnesty also would reduce the number of jobs available to the unemployed by adding more to the legal work force and simultaneously would slow down the rate of the unemployed's being re-employed.

Washington also has reduced our speech freedoms guaranteed in the First Amendment, by passing a hate crimes bill that was amended to the National Defense Authorization Act for Fiscal Year 2010, criminalizing conservative free speech if it can be proved to have contributed to assaults based upon sexual orientation.

The White House even has reduced religious freedoms, by belittling America's rich Judeo-Christian heritage, enabling a secular-progressive and pro-Islamic agenda, and remaining indifferent to certain issues, such as the American Civil Liberties Union's disposal in the Mojave Desert and at Mount Soledad of memorial crosses for veterans. It also has turned a blind eye to the whitewashing of our godly heritage from Washington's historic landmarks and on U.S. artifacts.

In addition, Washington would restrict religious freedoms and freedoms of conscience by forcing pro-life citizens to pay for abortions via universal health care.

Washington also has reduced our Second Amendment firearm freedoms by appointing anti-gun advocates, such as Justice Sonia Sotomayor and the Occupational Safety and Health Administration's David Michaels, by seeking to micromanage gun ownership via proposed legislation, including H.R. 45, and by politics as usual, such as blaming guns rather than Islamic extremism for the shootings at Fort Hood. (Those who believe that the Second Amendment is a foundational right and freedom might want to consider my new limited edition Chuck Norris Tribute Revolver -- available through America Remembers -- on their Christmas wish lists.)

Washington also has reduced our freedoms (and those of our service members) by increasing the threats to our country via the delay in response to our generals' requests for more troops in Afghanistan, allowing Gitmo detainees and terrorists to come to the U.S., and enabling homegrown terrorists, such as Maj. Nidal Hasan, within the very fabrics of our military.

As I consider these many freedom robbers and the political culprit enabling them all, two thoughts repeatedly come to my mind.

The first is from Daniel Webster, who said, "The contest for ages has been to rescue liberty from the grasp of executive power." I believe we are in the fight of our lives -- since the Revolution itself -- for American freedoms. I don't know who said it, but I definitely prefer liberty with danger to peace with slavery.

The second thought is one attributed to M. Grundler: "It is easy to take liberty for granted, when you have never had it taken from you."

I don't think I ever have been as thankful for American freedoms as I am now. I must admit that I'm appallingly alarmed that some of them might not exist at all by this time next year. Like a sunset dropping over the horizon of our Founders' dreams, our freedoms are vanishing from view.

So if you lack something for which to be thankful this Thanksgiving, you don't need to be eloquent; just bow your head, and say from your heart this simple prayer a good friend wrote and sent to me:

Let us thank them for our food and freedoms.