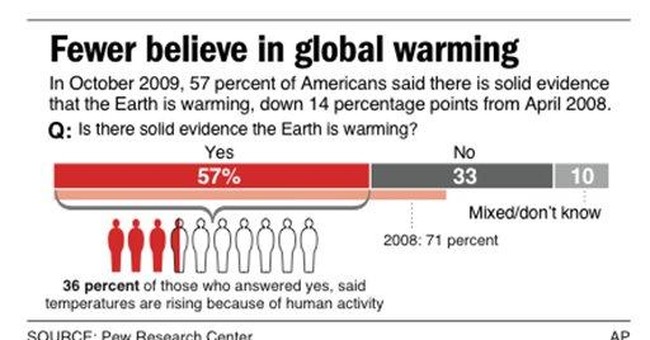 Halloween just got scarier -- much scarier.

It all sounds pretty politically benign, doesn't it? Not according to Christopher Monckton, who was a science policy adviser to Margaret Thatcher. Monckton spoke to the Minnesota Free Market Institute.

"I have read that treaty," Monckton said, "and what it says is this: that a world government is going to be created. The word 'government' actually appears as the first of three purposes of the new entity. The second purpose is the transfer of wealth from the countries of the West to Third World countries in satisfaction of what is called, coyly, 'climate debt' -- because we've been burning CO2 and they haven't. And we've been screwing up the climate and they haven't. ... And the third purpose of this new entity, this government, is enforcement. How many of you think that the word 'election' or 'democracy' or 'vote' or 'ballot' occurs anywhere in the 200 pages of that treaty? Quite right, it doesn't appear once."

Monckton then warned that if Obama were to sign the treaty, he would be flushing U.S. sovereignty down the global toilet. He further pointed out that even though ratification of our president's signature on that treaty would need 67 votes in the Senate, it could pass via a simple majority as an amendment to the cap-and-trade bill.

PolitiFact (as well as many left-leaning blogs) quickly criticized Monckton's conclusions as conspiratorial and climate-skepticism rhetoric, based upon the notion that the treaty is a draft and not a finalized document. The apologetic of PolitiFact leaves the impression that the current draft is the roughest of cuts, but in reality, it is the result of seven sessions of deliberations and revisions from several subgroups, including representatives from developed and developing countries "with a view to modifying it in the direction of consolidation and convergence."

As I myself read through the latest draft of the 181-page treaty, I noticed many lines that could warrant Monckton's and others' concerns. Phrases such as "creation of new levels of cooperation," "a shift in global investment patterns," "adjust global economic growth patterns," "integrated system of financial and technology transfer mechanisms," "new agreed post-2012 institutional arrangement and legal framework," "new institutional arrangement will provide technical and financial support for developing countries," "global fund," etc., are messages that make one wonder how far this political body's arm would reach into our country and force our hands into others.

Then there are red-flag statements such as these:

--"Ensuring that global crises, such as the financial crisis, should not constitute an obstacle to the provision of financial and technical assistance to developing countries in accordance with the Convention." (Page 11)

--"The scheme for the new institutional arrangement under the Convention will be based on three basic pillars: government; facilitative mechanism; and financial mechanism, and the basic organization of which will include the following: ..." (Page 18)

--"Particular effort should be taken to enhance cooperation amongst intergovernmental organizations." (Page 47)

--"A special fund shall be established: (a) For the economic and social consequences of response measures. ... (b) To assist countries whose economies are highly dependent on income generated from the production, processing and export, and/or on consumption of fossil fuels." (Page 138)

Now, if that isn't one powerful intergovernmental or global-governmental group overseeing and manipulating America's and others' economic and political conditions, I don't know what is.

Even if some of Monckton's claims about the United Nations Framework Convention on Climate Change are overstated, concerns about the extent of this body's political power and global economic sway are no more conspiratorial than the concern for Al Gore's comments in July that change will be driven through "global governance."

And does anyone doubt that our president, as a Nobel Peace Prize laureate who believes he can negotiate with terrorists and dictators, has a global desire for international coalescence? Or should it not concern us that at the G-20 conference, he pushed for world leaders to reshape the global economy?

I've been so flabbergasted lately by Washington's abandonment of our Founders' vision and principles that I expanded (to more than 300 pages) the new paperback version of my No. 14 New York Times best-seller, "Black Belt Patriotism" (available in January). It includes new materials in every chapter explaining how, in just one year, the Obama administration progressively has dismantled our Constitution, buried our economy, forsaken our posterity, dissolved our borders, abandoned our godly heritage, impaled the traditional family and crippled America's health and future.

One thing is certain: Obama wasn't kidding on the campaign trail when he said it's time for the U.S. to "turn the page" on its trivial culture wars. But who knew just how many pages he would be turning, even in his first year in office? Who knew he would actually swap the playbooks?

But then again, I'm sure the White House just thinks I've been watching too much Fox News.