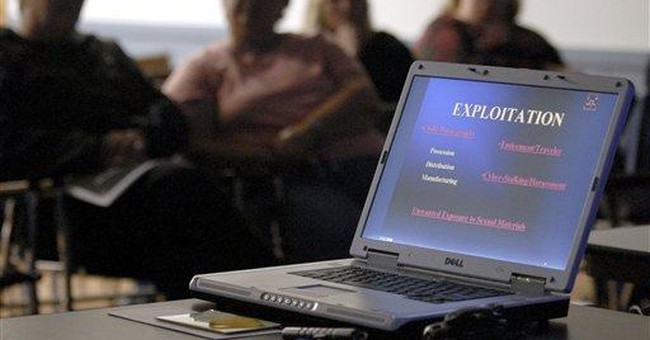 Sending nude photos and sexual videos via cell phone (called "sexting") is a fast-growing and dangerous trend among youths. And with spring breaks upon us, YouTube won't be the only one streaming videos during these juvenile siestas.

Sexting is not new, but it is on the rise. Cases are bubbling up all over the country. Just this past week in Virginia, at least two Spotsylvania County students were facing child pornography charges in a sexting case. The naked images of three girls (including an elementary-school student) were discovered on seven phones and traced back to the two accused students.

Last month, high-school girls in Greensburg, Pa., also were charged with child pornography after they sent semi-nude photos of themselves to male classmates.

Other similar incidents have resulted in charges in Ohio, Kentucky, Wisconsin, Georgia and Florida. Law enforcement has been called out recently to investigate sexting-related crimes by dozens of teens in many states across the nation.

And sexting is not just a male-dominant problem. A new national survey says that at least one-fifth of all youths have sent nude or explicit photos or videos of themselves via cell phone or have posted such images online.

Most astonishing, sexting is becoming a normative part of the dating scene and protocol among youngsters. Marian Merritt, who is Symantec's Internet safety advocate, writes and speaks about issues impacting the online security and safety of kids and families. She writes:

"Teens believe taking and sharing the sexy photo of themselves is a natural progression point in a romantic relationship. It's not just 'step 1, hold hands; step 2, kiss'. Now it's 'step 1. Friend on social network; step 2. Chat on IM or text; 3. Send sexy photos.' Crazy!"

So who's responsible? That's easy. First, there's the juvenile committing the crime. But there are two other culprits, as well -- accomplices to these acts. Who's providing the electronic devices? Who pays the phone bills? Whose names are on the plans? And what examples are these guardians setting as those who frown upon pornography? And thirdly, there's a culture that is moving away from moral absolutes, and that includes calling pornography wrong and even a sin.

So are your kids or grandkids involved in or at risk of sexting? Are they practicing safe cell phoning? Merritt advises parents and guardians to ask their kids these five questions to protect them from this latest strain of cyberporn:

"2. Show me how you take a photo with the phone. How do you send it to another email or phone?

"4. Has anyone ever sent or shown you a sexy photo of themselves or someone else?

"5. Anyone ever asked for your photo? If yes, how did you handle it? If no, what would you do and why?"

We might live in a technological wonderland, but that doesn't mean it's good to eat from all of its fruits. Most especially, we never should throw up our hands in surrender to marketing and peer pressure to give our kids everything the Joneses have, especially when those things expose them to others' exposing themselves. As a wise man said many centuries ago (well, sort of), "If your cell phone causes you to stumble, cut it off from your family's communication plan."

It's time not only to answer the question "do you know where your kids are this spring break?" but also to know what they're doing with their cell phones.