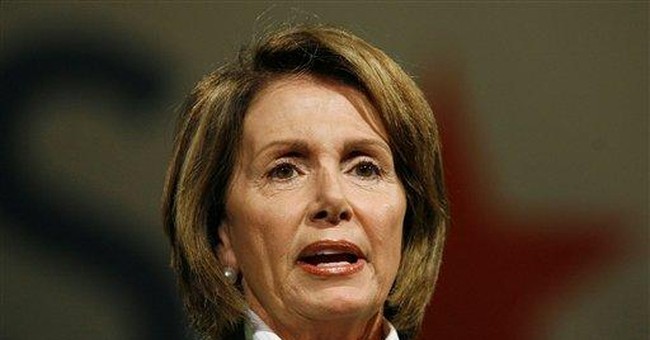 Despite the fact that a recent poll found that Americans now believe (by a 3-1 ratio) gas prices are a bigger problem than global warming, The Washington Post noted that House Speaker Nancy Pelosi, D-Calif., an avid opponent of offshore drilling, vows to block a drilling vote and even dialogue from occurring on the House floor. And Senate Majority Leader Harry Reid, D-Nev., echoed the same sentiment when he eliminated energy amendments to his anti-speculation bill. At the same time, Senate Appropriations Committee Chairman Robert Byrd, D-W.Va., canceled committee consideration of spending bills for fear that Republicans would include drilling amendments.

When President Bush recently lifted the executive ban on offshore drilling, the ball was placed completely in Congress' court to take the next move. But instead of Congress representing the majority of Americans' wishes to drill for domestic oil, they once again are favoring a minority. Pelosi justified their inactivity by blaming the president: "What we're saying is, 'Exhaust other remedies, Mr. President.' … It is the economic life of America's families, and to suggest that drilling offshore is going to make a difference to them paycheck to paycheck now is a frivolous contention."

My first reaction to Pelosi's recent congressional energy rebellion was to say, "What an anti-American, anti-reality-based form of representation." To pass the buck back onto the president to "exhaust other remedies" when he took the first step in opening the way for drilling is not only a relinquishing of congressional duties but also another deliberate political avoidance to help the majority of Americans. Two years ago, before taking the congressional helm, Pelosi blamed the president for the energy crisis. Now, instead of providing any solutions at all, she still is blaming the president. Instead of spending her valuable time leading Congress in resolving our energy crisis, she's kicking off a national tour to support her new book, "Know Your Power: A Message to America's Daughters." Is she in political la-la land?!

So just when I was about to go hit the punching bag (again) to alleviate my congressional stress, Rush Limbaugh helped to relieve my tension on his national broadcast. He spoke (again) for the majority of Americans (including me) against Pelosi's desire to tap into the Strategic Petroleum Reserve: "But (about) that strategic reserve oil, a question, ladies and gentlemen: How do we get it? Maybe somebody should call the speaker of the House, send a note to her office: 'Mrs. Pelosi, you want to release 700 million barrels from the strategic reserve. How did it get there? We had to drill for it, didn't we?' I mean, if she wants the 700 million barrels released in order to help with the price, which is not going to do that much, it's not that much oil. It's a one-time thing you can do. The oil had to be drilled. So drilling will lead to relief. We can drill our way out of this. We drilled our way into the strategic reserve."

There's something soothing that happens when someone on such a national scale as Rush Limbaugh speaks for you, which is exactly what's supposed to happen with our representatives -- especially the leader of our representatives -- but often doesn't. Compare the inept inactivity of Nancy Pelosi on this gas crisis with the informed activity of conservative talk show host Rush Limbaugh. Rush is politically savvy; Pelosi is politically cunning. Rush confronts government gridlock; Pelosi creates it. Rush gives solutions; Pelosi ground-n-pounds them. Rush says to drill here and drill now; Pelosi says not to drill now or later. Rush motivates Americans to action; Pelosi paralyzes the House to inaction. I would bet Rush has had more positive influence on Congress through the years by his broadcasts than Pelosi ever will from her House throne. If only Rush would seriously consider a run for her seat!

While I'm not espousing we canonize Rush and haven't always agreed with him, I thank God for him and join with so many across the land in celebrating the 20th anniversary of his national broadcasts Aug. 1. He truly is a father of modern conservative commentary. And he is a model of intelligence, perseverance and might for us all, despite personal and political setbacks. He is a leader of leaders among that league of extraordinary gentlemen and conservative cultural crusaders -- such as Glenn Beck, Sean Hannity, Bill O'Reilly, Dick Morris, Newt Gingrich, Ann Coulter, John Kasich and Frank Pastore, to name a few -- and, of course, a host of other conservative columnists, blogs and Web sites. I had the good fortune this past year of being among just a few others in an intimate dinner with Rush, and I found him to be every bit the gentleman, political and cultural sage, and quick-witted commentator in person as he is on radio.

Congratulations, Rush, on 20 years of broadcasting excellence, and many blessings on your next 20! Together, with all of our conservative voices, I hope we can turn around the waning passion of conservatives and liberal tides of our cultural war before it's too late. Most of all, I pray that we ultimately inspire a new generation of patriots who will fight on-air, on the Internet and in congressional halls with a fire like Patrick Henry had rather than what Nancy Pelosi has.