Will Romney Buy the White House? 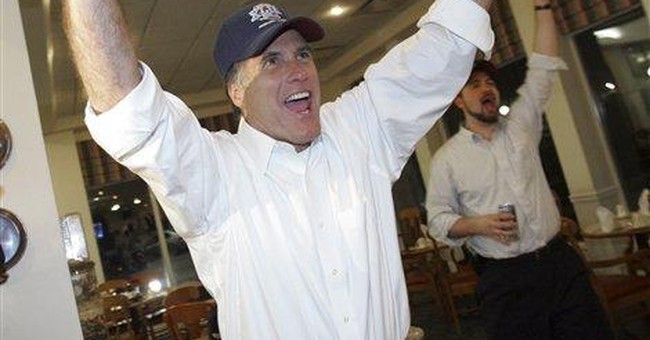 Mitt Romney might go down in history as the presidential candidate who spent more of his personal income than any other in his pursuit to win the White House. It is estimated that he already has used $35 million of his roughly $250 million personal fortune. And if Mitt makes the cut to be the Republican nominee, during the next 10 months, he surely will surpass Ross Perot's $60 million infusion into his own 1992 candidacy. To me, such excessive self-financing of one's campaign is not only a competitive injustice that rivals the use of steroids by athletes but also a fundamental flaw in the general race for president, which requires better campaign finance reform.

Last Wednesday, Romney conveyed that his campaign was not trying to purchase television advertisement on Super Tuesday, when 20-plus states hold simultaneous nominating contests. Then he flip-flopped (again) the very next day, telling reporters, "I have authorized a seven-figure -- I won't give you the exact number -- but seven-figure advertising buy for our campaign."

As one news agency put it, "One of Romney's greatest campaign strengths has been his deep pockets. A wealthy former businessman who has largely financed his own campaign."

The BBC described that Mitt "may be the only Republican candidate who can afford to buy advertising in major media markets ahead of Tuesday's poll."

On the other hand, John McCain finished 2007 with $3 million in campaign monies and a $4.5 million debt, according to Federal Election Commission records. We just learned he was so strapped for cash at the end of last quarter that he had to take out a special life insurance policy as a guarantee for payback of his debt.

McCain's financial consultant said, "I can't imagine any other campaign doing what he did. We were down to nobody. To nothing."

The campaign question is: Does Mitt's personal financing or McCain's personal debt reflect the type of fiscal leadership we want in the White House? One avenue demonstrates that the White House can be bought, and the other mirrors a same-old political approach to getting things done: borrowing.

As I echoed in last week's column, GOP candidate and former governor of Arkansas Mike Huckabee is the only presidential hopeful who is not spending recklessly or rashly.

Whatever the outcome of the presidential race, I'm admonishing citizens everywhere to write to their representatives today, beseeching them to require immediate and full disclosure of all personal and online campaign donations, as well as more equity between candidates' and supporters' contributions to campaigns. It is simply unfair to allow a wealthy man such as Mitt Romney to "loan" his own campaign $35 million-plus, when a candidate such as Mike Huckabee doesn't possess a personal fortune and only can receive $2,300 maximum from people such as you and me.

Past campaign finance reform, such as the McCain-Feingold law, restricts our First Amendment rights, among other detriments, and political action committees can weaken partisan politics. Trade unions and corporations might be prohibited from giving directly to a candidate's campaign, but soft money still sifts through the system. Equally broken, however, is campaign protocol in which a rich man possibly can pay his own way into the White House.

Where would Romney be right now if he were running on a financially level playing field with Mike Huckabee? Where would Mike be if he had the same financial empire as Mitt? If Mike beat Mitt in Iowa despite Mitt's 10-1 spending against him, Mike certainly would be winning if he could do the same in other states. If Mike is among the last four GOP candidates standing now (third in the delegate count), just think what his placement would be with a surplus of funds to battle on the airways like McCain and Romney.

As The Washington Post rightly noted, "Romney's money is his mojo: If he's not spending, he probably isn't winning."

The truth is, for Mitt, that his presidential run is the biggest investment gamble of his life. And with the White House appraising at roughly $106 million, he's betting his largest wager on owning the Oval Office.

As one appraiser calculated, "To qualify for a jumbo 30-year, fixed-rate loan at 7.5 percent, and assuming 10 percent down, the proud new owners of the 132-room house at 1600 Pennsylvania Ave. would need to pull down an annual salary of at least $18 million."

Then again, in an economic housing slump and with a possible recession on the horizon, Romney just might be able to take advantage of its owners (us) and maneuver them into a buyer's market steal.

The question is: Will we let him?