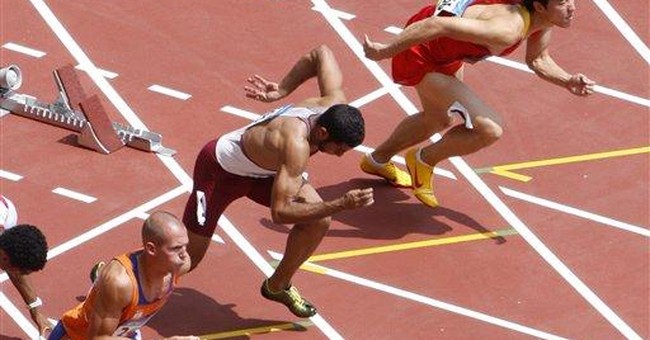 If you have been watching the Olympics, you cannot help but be awed by the strength, speed, and skill of Olympic athletes. Take Michael Phelps, the phenomenal American swimmer who took gold in event after event. Or Dara Torres, a 41-year-old American swimmer who bested much younger athletes, winning a silver medal.

These men and women have spent years training, strengthening, and perfecting their skills and their bodies. As much as we applaud their accomplishments, we marvel at their effort.

Now, imagine not long from now, watching an Olympic games featuring athletes who never had to train like Phelps and Torres have. Instead, their skills and physique were planned before their birth, enhanced through nanotechnology. The games would be called the “Bio-Olympics,” in which competitors have artificially enhanced features, like superhuman strength and speed.

Sound like science-fiction? It’s not. Not long ago the President’s Council on Bioethics wrote about such a possibility.

We talk often on “BreakPoint” about bioethics, especially when it comes to cloning, embryo-destructive research, genetic engineering, and so forth. But science is bringing even greater ethical dilemmas right to our front doors now.

As my friend Nigel Cameron points out in the latest issue of BreakPoint WorldView magazine—which, by the way, you can subscribe to for free at BreakPoint.org—science is moving beyond improving or fixing humanity, to remaking humanity.

Thanks to genetic, robotic, information, and nano technologies—collectively known by the ironic acronym GRIN—mankind is poised for what some call “engineered evolution.” Nigel warns that the very technologies that can “help us restore function to the disabled and fight disease, can also be used to bring in the ‘Brave New World’—in which what it means to be human, made in the image of God, is fundamentally lost.”

Not only will the results of this “evolution” be unprecedented, but so will the speed at which it happens. “Pain vaccines,” “memory pills,” and “gene doping,” which may turn even the scrawniest kid into a Hercules, are being tested as I speak.

But who will enjoy the fruits of such enhancements? As Nigel writes, developments in “blending human nature and machine nature through such means as the implanting of brain chips for memory, skills, or communication . . . could compound both the intelligence and the wealth of a small segment of society.” This could lead “to a new feudalism, in which power of all kinds is concentrated in the hands of ‘enhanced’ persons.”

This raises unimaginable ethical problems, and Christians must be engaged in the debate. As Nigel writes, “At the heart of the agenda for the 21st century lies the need to build a policy framework in which ethical principles set the ground-rules for our use of these new powers.” We must, he says, “secure human nature from commodification.”

I could not agree more. Humans and human nature are not commodities to be manipulated, bought, and sold. In the rush to “make life better and easier” by “improving” the human body, we cannot allow human life to become less human.