Missing in the Debate 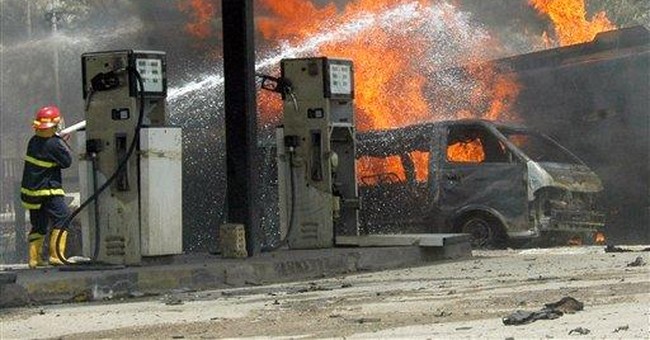 As the summer grinds on, the war of words over the real war in Iraq is growing hotter every day. Critics of the war are saying that the American people are fed up and want the troops to come home; that the Iraqi government needs to step up and take responsibility for the growing violence; that the war is straining our military—and our soldiers—to the breaking point.

Meanwhile, the war’s defenders are claiming that if the troops leave now, the enemy will have won. Instead of fighting terrorists in Iraq, we’ll be fighting them here in our homeland. Leaving now could lead to a wider war in the Middle East, with a resurgent Iran—led by a madman—wreaking havoc throughout the region.

But what I’m not hearing talked about at all is the fate of the Iraqi people.

One thing is for certain. If the U.S. pulls its troops out now, there will be a bloodbath. Many thousands of Iraqis will perish. I don’t know of any credible critic or supporter of the war who denies that fact. The lives of thousands—maybe hundreds of thousands—are at stake.

And what about the political future of the Iraqi people? What about their human rights? Several months ago, the debate over Iraq reached new levels of absurdity when the U.N.’s Kofi Annan claimed that the Iraqi people were better off before the war when Saddam Hussein was in power, defying U.N. sanctions, a threat to the Middle East and imposing unspeakable brutality on his people.

Many thousands were tortured, beaten, even burned. Chemical attacks by his regime killed 30,000 Iraqis and anywhere from 50,000 to 100,000 Kurds. To intimidate Saddam’s opponents, allegations of prostitution were used to justify barbaric beheadings. And most gruesome are the accounts of children tortured. The list of human rights violations goes on and on.

Having spent nine years in the Soviet gulag, Natan Sharansky knows a thing or two about living under tyranny. Writing in the Washington Post recently, Sharansky offered a more realistic before-and-after assessment of Iraq. “The truth,” writes Sharansky, “is that in totalitarian regimes, there are no human rights. Period. The media do not criticize the government. Parliaments do not check executive power. Courts do not uphold due process. And human rights groups don’t file reports . . . life under totalitarianism is slavery with no possibility of escape.”

Why? They want freedom. As the president said recently in Prague, freedom is a universal, God given ideal that all of humanity desires -- not the least of whom are the Iraqi people.

As Sharansky noted, “People of goodwill can certainly disagree over how to handle Iraq, but human rights should be part of any responsible calculus.” We don’t hear this even being discussed today in our shrill political debate.