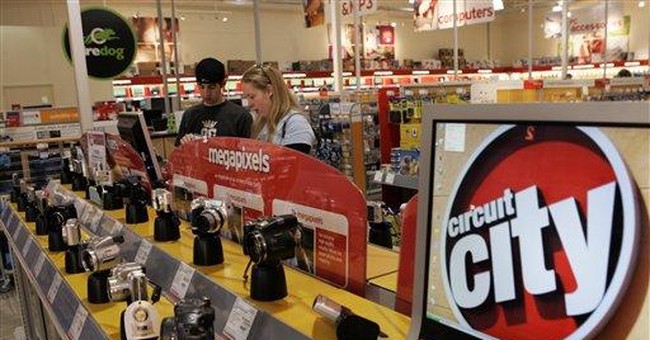 Last week, electronics retailer Circuit City announced that it was laying off 3400 employees.

What made these particular layoffs noteworthy was not their size but, instead, Circuit City's stated reasons. They had "nothing to do with [employees'] skills or whether they were a good worker or not." Instead, "it was a function of their salary relative to the market."

In other words, Circuit City was laying them off so it could replace them with people who make less. Rotten!

To be fair, Circuit City is not alone in this practice. It is part of a "new way of controlling labor costs in the service industry." Employers "determine the prevailing market wages for particular jobs in various geographic regions" and "then find ways to make sure that their workers' salaries stay within that range."

There is no consideration of an employee's productivity or quality of work. Nor is there any claim that the company can't afford to pay what the workers are currently making—only that it doesn't have to.

It is hard to imagine a clearer example of how rapacious unrestrained economic power can be. With all due respect to the late Milton Friedman, corporations' social responsibility goes beyond maximizing shareholders' returns.

But even if you do not think that unapologetically getting rid of workers so that they can hire cheaper workers is degrading and dehumanizing, it goes against your self-interest.

That is because it undermines the moral and cultural consensus that sustains free-market capitalism. Michael Novak has written about what he calls the "three-legged stool" that makes democratic capitalism possible: economic freedom, political freedom, and moral restraint. Take away any of these three and the system collapses.

Christianity's great contribution to this consensus was that it provided capitalism with a moral dimension that capitalism could not provide for itself. Its teachings about the necessity for moral restraint in the marketplace were rooted in the Old Testament concerns for social justice, fair wages, and care for the poor. It incorporated the consistent biblical teaching about human dignity, including the dignity of honest labor.

Christianity provided more than a basis for criticism of capitalism—it helped forge an alternative that kept what John Paul II called "the circle of exchange" going. In the aftermath of World War II, democratic capitalism in Europe appeared to have failed, leaving communism as its likely successor—until, that is, Christian statesmen like Konrad Adenauer of Germany created an alternative to amoral capitalism and socialism. It was called Christian democracy, and it saved Western Europe from communism.

Closer to home, there are companies like ServiceMaster and Herman Miller, which are run explicitly on Christian principles and have proven that a concern for your employees' dignity is not incompatible with making a profit.

Christianity has shown that capitalism can be the servant of justice, which is why I am so disturbed at Circuit City's actions. It is yet another reminder of Christianity's diminished cultural influence, which leaves people as disposable commodities and dehumanized. This is a sober reminder of why restoring Christian influence is so urgent.

Please donate online today to help the work of Prison Fellowship and BreakPoint. Or call 1-877-322-5527. Thank you!

For further reading and information:

Michael Novak,Business as a Calling: Work and the Examined Life (Free Press, 1996).

BreakPoint Commentary No. 061227, "Weber the Friendly Geist: Christianity and the Rise of Capitalism."

BreakPoint Commentary No. 030716, "Christianity and Capitalism: Using Business to Reach Our World."

BreakPoint Commentary No. 030717, "Taking Care of Business: Virtue in the Boardroom."

BreakPoint Commentary No. 030718, "Believers in Business: Apologetics for a Free-Market Society."

BreakPoint Commentary No. 020415, "Sharks, Stools, and Secularism: Can We Prevent Another Enron?""

BreakPoint Commentary No. 940601, "Is Capitalism Christian?: The Revolutionary Michael Novak."