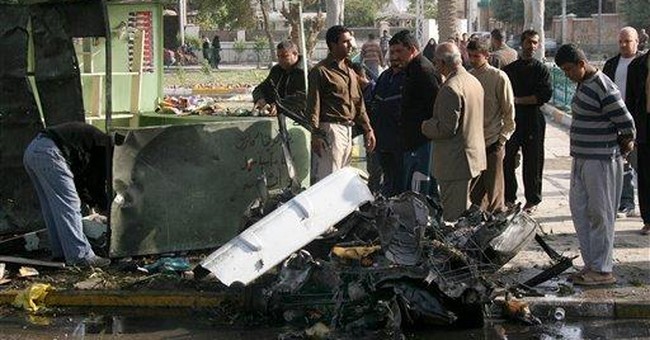 What difference does a worldview make? Around the world, we are seeing the clash of civilizations in action. In recent days, that clash has given us a story of life, and stories of death.

In Baghdad yesterday, a terrorist blew himself up with a car bomb, killing at least twenty-eight people and wounding dozens more. One witness told the Associated Press that pieces of human flesh were scattered all around the marketplace.

In Afghanistan last month, another terrorist blew himself up near a crowd gathered for a ceremony to open a hospital emergency ward. A few days later, a Sunni Muslim blew herself up and forty others at a college in Baghdad.

In all three cases, Muslims blew up Muslims. The response of Europe and the Muslim world to the stories of death? Outrage? No. Silence. Did the Western press condemn them? No.

Last week, another story was told on NBC News—this time, a riveting story of life.

NBC has been running a gripping series on the emergency military triage facilities in Iraq. Last Thursday, NBC showed wounded Iraqi insurgents being brought to Camp Speicher near Tikrit. Two of them had been caught placing an explosive device on a nearby road, intending to kill Americans, when a U.S. helicopter opened fire on them.

The U.S. medical team moved heaven and earth to save their lives. One insurgent, however, was not going to survive unless he got thirty pints of blood.

But the base was low on blood. The call went out for volunteer donors; minutes later, dozens of G.I.s had lined up.

At the head of the line was a battle-hardened soldier named Brian Suam. Asked if it mattered that his blood was going to an insurgent, he smiled and said, no—“A human life is a human life.”

I have never seen a more dramatic example of worldviews in contrast, nor have I been prouder of an American G.I. On one hand, we have the horrors of a civilization that values death—even the death of its own children—if by killing them they can hurt the infidels. On the other side, we have a story that makes us realize just how deeply embedded within American life is our Judeo-Christian heritage. This heritage teaches that human life is sacred—even the life of an enemy who falls into our hands.

These stories make nonsense of the claim that there is no real difference between Christianity and Islam. The clash of civilizations is not only about a fundamental difference between ways of viewing God, reality, life, and life’s meaning; it’s also about good versus evil, life versus death. Of course, this doesn’t apply to peace-loving Muslims, but to the radicals now surging in the Arab world.

It’s time for the West to wake up. As Thomas Friedman of the New York Times put it last week, there is no accepted source of Arab-Muslim authority today for peace-loving Muslims “to anchor their souls in.” We need, Friedman writes, “a counter-terrorism strategy that delegitimizes suicide bombers.” But that will happen only when Muslim leaders condemn violence.

Friedman is right. We ignore the horrors of radical Islam to our peril. If we do nothing, in time, the stories of life will be overwhelmed by the stories of death.