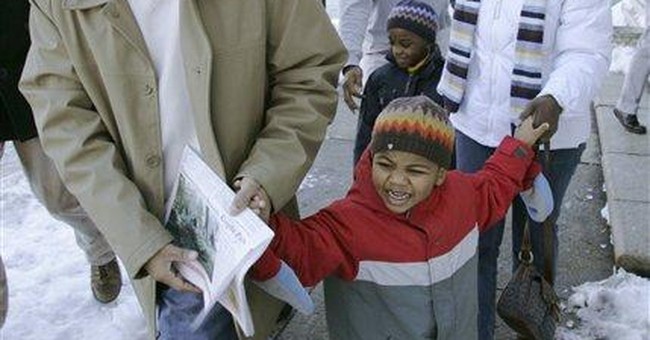 Isabella Miller-Jenkins is only four years old, but she is at the center of one of the most important legal battles of our time. A judge will soon decide whether a woman with no biological or adoptive ties to Isabella can legally be declared her mother.

It sounds incredible, but it is the logical result of where our anything-goes society has been leading us all these years.

As the Washington Post reports, Isabella was conceived via artificial insemination while her mother, Lisa Miller, was in a same-sex civil union with Janet Jenkins. But later the civil union fell apart. Lisa took Isabella and left Vermont for Virginia. She also returned to the Christian faith of her childhood and became "determined to 'leave the [lesbian] lifestyle'." That meant that she no longer considered Janet to be Isabella’s parent.

But in our reckless pursuit of getting whatever we want at all costs, our nation has begun interpreting the law in a way that reinforces all the fictions that Lisa Miller no longer believes.

The subhead in the Post article says it all: "Janet Jenkins and Lisa Miller got hitched and had a baby together." Together? Anybody who knows anything about biology knows that’s impossible. But that’s just how the courts are looking at it. As a judge in the case told Janet Jenkins’s lawyer, Janet (the lesbian partner) "without question is presumed to be the natural parent . . . by the basis of the civil union." So in the court’s eyes, Isabella is the child of two women, something biologically impossible.

How is it possible that laws and court procedures could have become so dangerously fantasy-based? Actually, we should not be surprised. Many modern parents have unwittingly been collaborating with the process for years. The Washington Post tells us how Judge Cohen explained it: "[C]onsider the situation of a heterosexual couple in which an infertile husband agrees for his wife to be artificially inseminated with donor sperm." In such a case, the judge stated, the husband would be presumed to have parental rights even though someone else had actually fathered the child.

It all ties together. Heterosexual couples have tacitly approved this practice of including a silent third partner in a marriage to produce a child. And then it makes it very difficult to cry foul when homosexuals do the same thing.

Isabella’s plight shows us the tragic consequences of rejecting the biblical view of marriage, which provides for one man and one woman in the union to raise the child. Sure, there are extraordinary circumstances, and adoption is possible. But the norm is the norm, and the law has always recognized the natural moral order.

If Janet Jenkins wins her case—which may go all the way to the U.S. Supreme Court—Isabella may be taken from her biological mother to live with a woman she barely remembers.

And not only Isabella; many other children would also be threatened by this waving of the judicial magic wand to produce legal parents out of nowhere.

I urge you to visit our blog at www.thepoint.breakpoint.org to read more about this important story. We need to see how our attitude of “I can do anything I want, and it won’t hurt anybody” has led to a situation that could hurt families everywhere.

Here's Why Democrats Are Optimistic About Their Latest Gun-Grabbing Scheme
Matt Vespa
Barack Obama Tweeted 'One of The Worst Tweets in History' Over Uvalde School Shooting
Rebecca Downs
What Is Wrong with Eric Swalwell?