ECB's Major Effect on the Markets 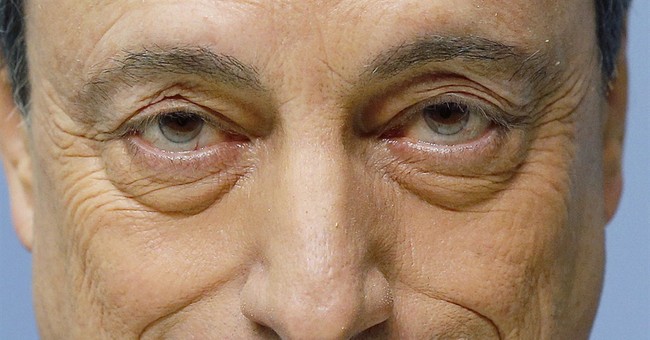 It became interesting for investors as European Central Bank (ECB) President Mario Draghi stepped up to the monetary stimulus plate during the past week. To use baseball analogies, investors will watch policy to see if he hits a home run with his policy initiatives, strikes out or hits something in between, such as a stand-up double?

And some of the hotter topics at Davos will be the contrast between the strength of the U.S. economy and the weakness of the euro zone and emerging markets, as well as the divergence in monetary policies between the Federal Reserve, European Central Bank and the Bank of Japan. To me, the difference between the economic prospects was summed up when the World Bank recently raised its 2015 growth forecast for the United States to 3.2% from 3%, while the euro zone is expected to grow at only 1.1% and Japan at 1.2% this year.

That “adjustment” was reinforced by the International Monetary Fund’s (IMF) negative revision for global growth prospects this year. According to the IMF, the world economy will now grow by 3.5% in 2015 and 3.7% in 2016, down from its October forecast that put growth at 3.8% and 4%, respectively. Also, much like the World Bank, the IMF revised its estimate for U.S. economic growth to 3.6% this year, up half a percent. Some quick math shows that the IMF cut its outlook for the three other economic horsemen that are China, the euro zone and Japan.

Those forecasts put Thursday’s European Central Bank meeting in greater focus as policymakers seek to offer a stimulus package to revive the stagnant euro zone. To me, there was no clearer sign than the Swiss National Bank’s move to decouple the value of the Swiss franc against the euro ahead of the upcoming ECB meeting.

But let’s not forget the improving outlook for the U.S. economy. As I tell subscribers to my PowerTrend Profits investment newsletter, just like in basketball, we want to be investing where the ball is heading, not where it currently sits.

On a side note, I recommend that you pick up the most recent edition (January 19, 2015) of weekly financial paper Barron’s. The issue features part one of my favorite reads of the year, the Barron’s Roundtable, which pulls together some of the biggest brains in the money management world. Topics ranged from their outlook on the global economy and interest rates to what’s ahead for the stock market. Of course, we have to keep in mind that each participant has his or her own investing framework which dictates the kinds of securities he or she can invest in. For example, Scott Black, founder and president of Boston-based Delphi Management, is a tried and true value investor. For 2015, Black predicts the S&P 500 returning 10% — with 8 points of that coming from growth and 2 points from the dividends. For context, the S&P 500 returned 32.4% in 2013 and 13.7% in 2014 (including dividends).

If I was a person that only invested in stocks, then I may agree with Black on his outlook for the S&P 500, but not only do I look at the shifting changes in economics, demographics, psychographics, technology and regulatory mandates to hunt for better returns, I also trade options. It’s those same options that can help deliver outsized returns in good times and help cushion or even offset the pain of a falling market. That combination is the strategy I employ in The Thematic Growth Portfolio I manage for Fabian Wealth Strategies, as well as in my investment newsletter and trading services, such as PowerOptions Trader.

Learn the Essentials of Options Trading with My New Video

Even though options trading activity has grown by leaps and bounds during the last few years, I know there are thousands and thousands of folks who are interested but feel they simply don’t know enough about trading options. A recent industry data point from TD Ameritrade showed that more than 70,000 investors made their very first options trade in the last 12 months. Think about it — nearly 6,000 people made their first options trade in the last month. Perhaps they need to improve their retirement savings after the financial crisis, save for that dream home or simply make sure there’s enough money to put their children or grandchildren through college.

That’s why Eagle Financial Publisher Roger Michalski and I sat down and filmed this free video. I’m confident it will help you understand what you need to know — the essentials — when it comes to trading options. I’ll also show you how, time and time again, subscribers of PowerOptions Trader are making triple-digit percentage gains on our options trades using the intersection of PowerTrends and options contracts.

Follow this link to watch my new options video presentation.

In case you missed it, I encourage you to read my e-letter column from last week about using market catalysts and timing to your advantage. I also invite you to comment in the space provided below.

Join me for the World MoneyShow in Orlando, Florida, Feb. 4-7 at the Gaylord Palm Resort & Convention Center. To register for free admission to the investment conference, click here or call 1-800-970-4355 and mention you are one of my readers. Use priority code 038046.