A Progressive Bait and Switch 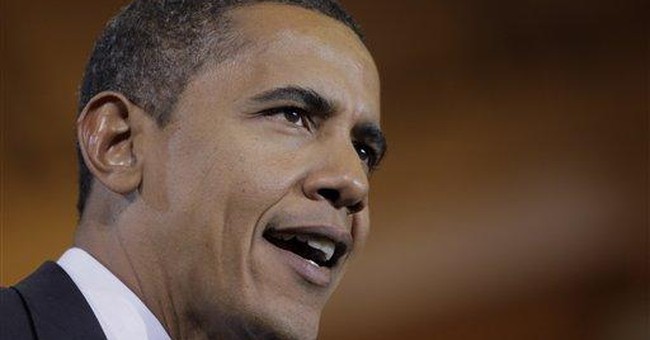 Here we are, less than a week until the November 2008 elections and the “progressive” spin machine is in high gear. This progressive spin machine is comprised of the mainstream media and their friends in the Democrat party. Together, these two entities keep their message tight as they work for their utopian dream of a perfect world.

However, this utopian dream must be financed. That is where you and I come in to play. Consider what Barack Obama has been saying throughout this campaign. He has consistently said that he will only raise tax rates on those whose income is $250,000 or more. Never mind that it is those very people who employ many Americans.

The flaw in this line of thinking was exposed when Obama spoke with Joe Werzelbacher -- dubbed Joe the Plumber -- a blue-collar man from Ohio wanting to buy a plumbing business. Obama told Joe he wanted to “spread the wealth around.” In other words, taking a page from Karl Marx, Obama desires to redistribute our nation’s wealth.

How will Obama and Congressional Democrats do this? The non-partisan Tax Policy Center stated that Obama would award refund checks “to eligible households even if they have no income tax liability.” The Tax Policy Center went on to mention that 60.7 million people who pay no income taxes would receive refund checks from Obama and the Democrat Congress. 60.7 million people!

On the other hand, only 33.8 million people, who pay about 40 percent of all income taxes, will see any kind of refund. Here we see the progressive bait and switch routine in action.

What do I mean by a progressive bait and switch? Well, for years the Democrats have been telling us that they are not liberal, they are just “progressive.” They figured out long ago that it is easier to digest voting for a politician that is progressive, as opposed to one that is overtly liberal. This shell game of semantics is designed to obfuscate and make us forget about what a liberal Democrat candidate truly stands for. Then, once in power, the Democrats show their true colors by raising taxes, redistributing that revenue and punishing those who desire to succeed.

A perfect example of the Obama bait and switch routine can be found in the mantra he keeps repeating, where 95% of Americans will supposedly see a tax cut when he is elected president. Yet, only about 60% of Americans pay taxes. How can he give tax cuts to people who do not pay taxes? Through those aforementioned refund checks.

Obama is not really offering a tax cut at all. He is engaging in the confiscation and the subsequent redistribution of our money.

There is another great concern for taxpayers with an Obama administration and a Democrat controlled Congress. On Jan 1, 2011, the Bush/Republican tax cuts will expire unless Congress acts. Obama has already said he will let them expire. As such, virtually all taxpayers will see income tax increases. The death tax will also be allowed to expire and that will harm not just the rich, but family farmers as well, who will be heavily taxed.

Think about this. Family farmers will be punished via taxation by the Obama administration and a Democrat Congress for simply passing along their family business to the children. So will small business owners. This will be on top of the tax increase the Democrats will use to give refund checks to those 60.7 million Americans who pay no income taxes.

In reality, there is nothing progressive about these tax policies. These are regressive tax policies aimed at buying votes.

Yet, the spin designed to cover up the Democrat plans continue with the help of the media. They continue to claim that Obama and the Democrat Congress will cut our taxes and only raise tax rates on the rich. Bill Clinton made the same outrageous claim when running for President in 1992. Clinton promised a middle class tax cut and said that he would only raise taxes on the rich. Well, the average American was surprised to find out that we were all rich when the Democrats in Congress passed, and Bill Clinton signed into law, the largest income tax increase in American history.

If you are still not convinced of the Democrats’ progressive bait and switch routine, think about Barack Obama’s radio interview in 2001 with Chicago Public Radio, WBEZ. During the interview Obama showed his disdain for the founding fathers and the Constitution by saying that the Constitution was flawed. How was it flawed? According to Obama, the Constitution was flawed because it did not allow the Supreme Court to redistribute the wealth of hard working Americans. He then adds a caveat by saying the Congress can redistribute the wealth. Did we get that? Obama believes it is the job of Congress to take our money and give it away.

The Democrats in Congress are more than willing to comply. Just last week, House Democrats invited liberal Democrat professor, Teresa Ghilarducci, to testify before Chairman George Miller’s (D-CA) Education and Labor Committee. The director of the Congressional Budget Office, Peter Orszag, referenced the loss of some $2 trillion in retirement savings over the past 15 months. Ghilarducci stated at that hearing that she had the solution for the loss of those retirement savings.

Ghilarducci offered a plan where the federal government would give American workers a $600 annual inflation-adjusted subsidy from the U.S. government, with the requirement that American workers invest no more than 5 percent of their pay into a retirement account administered by the Social Security Administration.

The money in turn would be invested in special government bonds that would pay 3 percent a year, adjusted for inflation.

In other words, the federal government would take over our retirement plans and place it into the Social Security budget. If that is not socialism, I don’t know what is.

Will Obama actually go along with Ghilarducci’s scheme? The same scheme embraced by some Congressional Democrats? Obama has already said he wants to make 401(k) savings mandatory. In other words, yes, he will make the confiscation of our retirement money mandatory, and then redistribute that money to the Social Security Administration, where they can rob that trust fund once again.

Make no mistake, a larger Democrat majority in Congress, along with an Obama administration, will lead to a series of socialistic plans that involve the confiscation and redistribution of our hard earned wealth. That is the change that Obama and the Democrats want for us. Yet, change is all we will have left in our pockets when they are done robbing us blind.

This will all be done for our own good they will say. All under the guise of a progressive bait and switch.