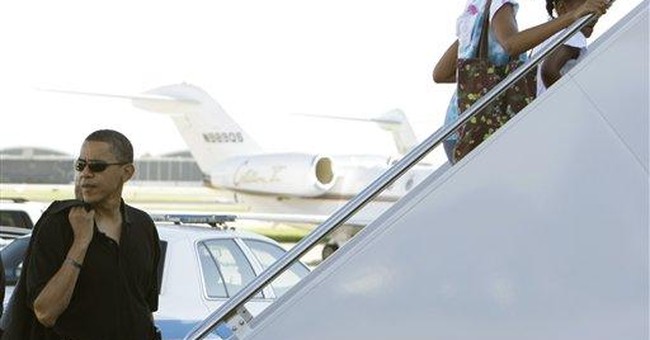 For an entire week, Americans watched as Senator Barack Obama took his act on the road, courting the European elitists and cowtowing to an endless array of foreign politicians. At this point it may be easy to take Obama’s “celebri-plomacy” lightly. Yet, his trip highlights a dangerous threat to America’s national sovereignty in the form of his globalist policies that will diminish America’s role in the world and outsource decisions of vital national interest to the United Nations.

His Global Poverty Act, currently under consideration in Congress, is just one such policy. Despite its seemingly innocuous title, the Global Poverty Act would force America to adopt the U.N.’s “Millennium Development Goals” as official U.S. policy. This means outsourcing to the United Nations all important decisions concerning the use of U.S. foreign aid dollars. Not only that, but the fee for allowing the U.N. to play the “middle man” in our global war on poverty would be a tax of .7 percent of the U.S. Gross National Product. That’s right. Barack Obama and his liberal allies such as Senator Biden have signed on to a bill that would allow the U.N. to tax America (and Americans) an estimated $845 billion over the next 13 years. Obama’s plan represents perhaps the greatest affront to our national sovereignty since the War of 1812.

The Global Poverty Act dismisses the American ideals of a free-market economy and responsible government for a global bureaucracy that has already lost tens of millions in development funds to corruption. The measure demands virtually no accountability or reform from the impoverished and often oppressive nations who are the recipients of our charitable largess. Furthermore, the United Nations Development Program has become the favorite “rich uncle” of terrorist states and rogue regimes, accidentally funneling millions to North Korea’s illicit weapons programs and violating 95 U.S. export laws in the process.

You might ask how this abomination has quietly made its way through Congress with barely a mention on mainstream media or by our representatives in Washington. The Global Poverty Act began in the U.S. House with only 84 co-sponsors and was quietly passed by a voice vote by Democrats and some well-meaning Republicans who did not know what was in the bill. Now, Obama has “taken the football” and launched a continuous effort to ram the bill through the Senate with the help of his new foreign policy lap dog, Senator Joe Biden (In the interest of full-disclosure, I should note that I am currently the Republican running against Joe Biden for the U.S. Senate in Delaware).

Senator Biden rushed the bill through the Senate Foreign Relations Committee with another voice vote and without any hearings. The Senate voted against the bill in February 2008, but now Obama, Biden and their liberal cohorts lay in wait to slip the bill past the American people by rolling it into another larger spending package like the so-called “Coburn Omnibus.”

If we are not vigilant and allow Democrats in the Senate to sneak the “Global Poverty Tax” past the voters, we will sacrifice our national sovereignty and set the dangerous precedent of allowing the United Nations to tax Americans. Our “reward” for our benevolence will be a bureaucracy that provides little accountability and no measurable returns on our hefty global investment.

Without an insistence on serious economic and government reforms and accountability for every dollar spent, the U.S. will continue to spend hundreds of billions attempting to treat the symptoms of global poverty while at the same time feeding the disease. Reform and accountability are key to insuring that our investment in the fight against global poverty produces immediate and measurable results while providing freedom and long-term economic reform that give individuals the tools to lift themselves out of poverty and partake in the benefits of a free-market economy.

Throwing more money at the problem is not the answer. Handing over the job to an organization renowned for its incompetence is a recipe for disaster. Our greatest export is our unique system of government and the ingenuity it fosters. Economic assistance coupled with measurable reform provides a pathway to prosperity and a petri dish for burgeoning economic opportunity—not just for developing nations but also for the U.S. We have only to look at our $17.5 billion in annual exports to India’s growing middle class to see the long-term benefits of promoting government and economic reform both through responsible development aid and private sector partnerships.

America as a nation is at a critical time in her history. For 200 years, the United States has been a beacon of freedom and prosperity for the world. If we subjugate our leadership role to the U.N. and outsource our responsibilities to the United Nations’ Development Program, we will leave global prosperity and freedom to chance, crush the American economy with an $845 billion tax and fail all people throughout the world who aspire to all that we have achieved.

The Global Poverty Act is the first battle in what is no-doubt a far-reaching liberal assault on our sovereignty, our prosperity and our role as the leader of the free world. Obama, Biden and other globalist Democrats want to turn the United States into a nation of followers, but I still believe that America has a unique role as a defender of the oppressed and an example to every person with the capacity to dream of a better life. If we shirk our responsibility now, we will lose our national soul and the free world will pay the price for our passing the buck.