It was a calm start to the last trading day of the week after a tumultuous ride where commodity prices took a hit mid-week, then recovered.

Once again we find gold, crude oil and silver prices disconnected from currency changes as the euro gained back ground against the dollar.  The industrial metals stayed with currency with platinum, palladium and copper all moving higher.

The disassociation from currency prices is one of the more obvious signs we’re in a volatile market environment with investors searching for direction.

My typical advice is for retail investors to steer clear of volatile markets but this may be an exception.  It’s beginning to look more and more like the current price range represents a new normal for gold prices and not merely a seasonal spike. 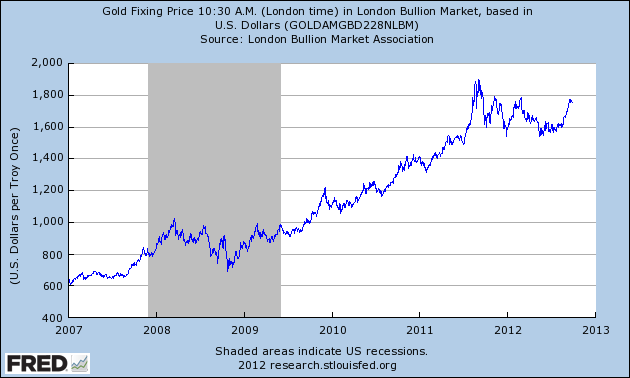 If you accept that the global economy has been in a recession since 2011 we can make a fair comparison to the recession in 2008.  If you look at a five year chart, you’ll notice the price of gold moved lower through almost all of 2008, then went up for the next three years.

If we accept the global economy is coming out of recession, and that central banks are trying to print their way out of trouble, like they did in 2008, then I see no reason why gold would not resume an upward trajectory as it did from 2009 to 2011.