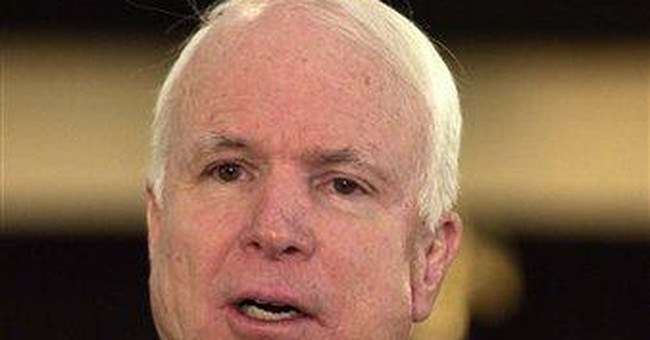 I want to thank TownHall.com for letting me share my decision to support Senator John McCain for President in 2008. The Republican Party is blessed to have a number of qualified and conservative candidates who can both win in November and serve our country with distinction.

I believe the preeminent issue facing America today is our global War on Terror, and opposing the adversaries of freedom and enemies of peace. I measured our candidates on their ability and experience to direct a global War on Terror, manage and complete a war in Iraq, and command the respect of our troops and allies. John McCain's experience and national defense credentials make him the most qualified person to serve as our next Commander-in-Chief.

The President of the United States must serve in many capacities besides the leader of our Armed Forces. Fortunately, the best man for the job is also a champion of conservatism who will advance our philosophy in all aspects of the office, not just the military.

For years, the national media has portrayed John McCain as a "moderate" Republican. I believe they like Senator McCain, find his policies reasonable, but can't stomach the idea of supporting a conservative Republican. In reality, John McCain is a true conservative and his words, votes, actions, and record in the Senate reflect that conservatism.

He built a legacy of fiscal restraint by gutting pork barrel spending, cutting government waste, and opposing excessive spending. He is a budget hawk and balanced budget advocate. He opposes raising taxes. He will return our party to the smaller government, lower spending policies advocated by leaders like former President Ronald Reagan that were lacking in the previous election.

John McCain has a 24-year pro-life record; he supports a reversal of Roe v. Wade. He believes in the traditional meaning of marriage: a union of one man and one woman. He opposes gay marriage and believes no state should be required to recognize another state’s definition of marriage. He supports school choice; he supports our Second Amendment rights; he believes faith has a public role in our nation.

As Democrats filibustered President George W. Bush's judicial nominees, John McCain brought leadership to the Senate. His strategy with the Gang of 14 paved the way for the approval of John Roberts and Sam Alito to the Supreme Court of the United States.

John McCain is a reformer. He will take on the status-quo and challenge the entrenched interests and bureaucracies which hampered the federal emergency response in disasters like Hurricane Katrina.

Throughout our history, there are critical moments, decisive times when choices turn our country and our world. When essential decisions of foreign and domestic policy are made, it is at that moment that the character and integrity of a leader is measured by history. In our global struggle against the adversaries of freedom and the enemies of America, we will face these moments. It is for those sobering moments, I choose John McCain.