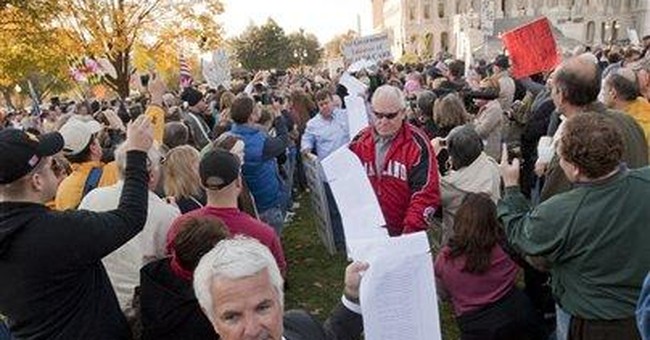 WASHINGTON -- The United States has the best health care in the world -- but because of its inefficiencies, also the most expensive. The fundamental problem with the 2,074-page Senate health-care bill (as with its 2,014-page House counterpart) is that it wildly compounds the complexity by adding hundreds of new provisions, regulations, mandates, committees and other arbitrary bureaucratic inventions.

Worse, they are packed into a monstrous package without any regard to each other. The only thing linking these changes -- such as the 118 new boards, commissions and programs -- is political expediency. Each must be able to garner just enough votes to pass. There is not even a pretense of a unifying vision or conceptual harmony.

The result is an overregulated, overbureaucratized system of surpassing arbitrariness and inefficiency. Throw a dart at the Senate tome:

-- You'll find mandates with financial penalties -- the amounts picked out of a hat.

-- You'll find insurance companies (who live and die by their actuarial skills) told exactly what weight to give risk factors, such as age. Currently insurance premiums for 20-somethings are about one-sixth the premiums for 60-somethings. The House bill dictates the young shall now pay at minimum one-half; the Senate bill, one-third -- numbers picked out of a hat.

-- You'll find sliding scales for health-insurance subsidies -- percentages picked out of a hat -- that will radically raise marginal income tax rates for middle- class recipients, among other crazy unintended consequences.

The bill is irredeemable. It should not only be defeated. It should be immolated, its ashes scattered over the Senate swimming pool.

Then do health care the right way -- one reform at a time, each simple and simplifying, aimed at reducing complexity, arbitrariness and inefficiency.

First, tort reform. This is money -- the low-end estimate is about half a trillion per decade -- wasted in two ways. Part is simply hemorrhaged into the legal system to benefit a few jackpot lawsuit winners and an army of extravagantly rich malpractice lawyers such as John Edwards.

The rest is wasted within the medical system in the millions of unnecessary tests, procedures and referrals undertaken solely to fend off lawsuits -- resources wasted on patients who don't need them and which could be redirected to the uninsured who really do.

In the 4,000-plus pages of the two bills, there is no tort reform. Indeed, the House bill actually penalizes states that dare "limit attorneys' fees or impose caps on damages." Why? Because, as Howard Dean has openly admitted, Democrats don't want "to take on the trial lawyers." What he didn't say -- he didn't need to -- is that they give millions to the Democrats for precisely this kind of protection.

Second, even more simple and simplifying, abolish the prohibition against buying health insurance across state lines.

Some states have very few health insurers. Rates are high. So why not allow interstate competition? After all, you can buy oranges across state lines. If you couldn’t, oranges would be extremely expensive in Wisconsin, especially in winter.

And the answer to the resulting high Wisconsin orange prices wouldn’t be the establishment of a public option -- a federally run orange-growing company in Wisconsin -- to introduce "competition." It would be to allow Wisconsin residents to buy Florida oranges.

But neither bill lifts the prohibition on interstate competition for health insurance. Because this would obviate the need -- the excuse -- for the public option, which the left wing of the Democratic Party sees (correctly) as the royal road to fully socialized medicine.

Third, tax employer-provided health insurance. This is an accrued inefficiency of 65 years, an accident of World War II wage controls. It creates a $250 billion annual loss of federal revenues -- the largest tax break for individuals in the entire federal budget.

This reform is the most difficult to enact, for two reasons. The unions oppose it. And the Obama campaign savaged the idea when John McCain proposed it during last year's election.

Insuring the uninsured is a moral imperative. The problem is that the Democrats have chosen the worst possible method -- a $1 trillion new entitlement of stupefying arbitrariness and inefficiency.

The better choice is targeted measures that attack the inefficiencies of the current system one by one -- tort reform, interstate purchasing and taxing employee benefits. It would take 20 pages to write such a bill, not 2,000 -- and provide the funds to cover the uninsured without wrecking both U.S. health care and the U.S. Treasury.

Watch: Police Officer Refuses to Kneel, Says ‘I Only Take a Knee Before God’ as Protestors Scream at Him
Redstate
“Right now it looks like a sham. People feel conned. And they should.”
Hotair