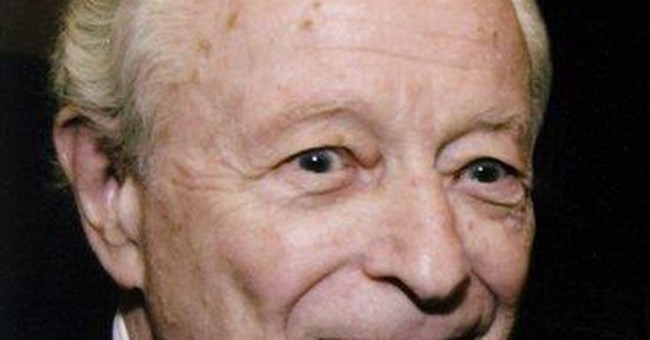 WASHINGTON -- After the plain pine box is lowered into the grave, the mourners are asked to come forward -- immediate family first -- and shovel dirt onto the casket. Only when it is fully covered, only when all that can be seen is dust, is the ceremony complete.

Such is the Jewish way of burial. Its simplicity, austerity and unsentimentality would have appealed to Irving Kristol, who was buried by friends and family Tuesday. Equally fitting for this most unsentimental of men was the spare funeral service that preceded the burial. It consisted of the recitation of two psalms and the prayer for the dead, and two short addresses: an appreciation by the rabbi, followed by a touching, unadorned remembrance by his son Bill.

The wonder of Irving was that he combined this lack of sentimentality with a genuine generosity of spirit. He was a deeply good man who disdained shows of goodness, deflecting expressions of gratitude or admiration with a disarming charm and an irresistible smile. That's because he possessed what might be called a moral humility. For Irving, doing good -- witness the posthumous flood of grateful e-mails, letters and other testimonies from often young and uncelebrated beneficiaries of that goodness -- was as natural and unremarkable as breathing.

Kristol's biography has been rehearsed in a hundred places. He was one of the great public intellectuals of our time, father of a movement, founder of magazines, nurturer of two generations of thinkers -- seeding our intellectual and political life for well over half a century.

Having had the undeserved good fortune of knowing him during his 21-year sojourn in Washington, I can testify to something lesser known: his extraordinary equanimity. His temperament was marked by a total lack of rancor. Angst, bitterness and anguish were alien to him. That, of course, made him unusual among the fraternity of conservatives because we believe that the world is going to hell in a handbasket. That makes us cranky. But not Irving. Never Irving. He retained steadiness, serenity and grace that expressed themselves in a courtliness couched in a calm quiet humor.

My theory of Irving is that this amazing equanimity was rooted in a profound sense of modesty. First about himself. At 20, he got a job as a machinist's apprentice at the Brooklyn Navy Yard. He realized his future did not lie in rivets, he would recount with a smile, when the battleship turret he was working on was found to be pointing in the wrong direction. It could only shoot inward -- directly at the ship's own bridge.

He was equally self-deprecating about his experiences as an infantryman in World War II France. ("Experiences?" he once said to me. "We were lost all the time.") His gloriously unheroic view of himself extended to the rest of humanity -- its politics, its pretensions, its grandiose plans for the renovation of ... humanity.

This manifested itself in the work for which he is most celebrated: his penetrating, devastating critique of modern liberalism, and of its grand projects for remaking man and society. But his natural skepticism led him often to resist conservative counterenthusiasms as well. Most recently, the general panic about changing family structures.

Irving had an abiding reverence for tradition and existing norms. But he thought it both futile and anti-human to imagine we could arrest their evolution. He never yelled for history to stop. He was less concerned about the form of emerging family norms, such as France's non-marriage Civil Solidarity Pact, than whether they could in time perform the essential functions of the traditional family -- from the generational transmission of values to the socialization of young males.

That spirit of skepticism and intellectual openness was a marvel. One of Irving's triumphs was to have infused that spirit into The Public Interest, the most serious and influential social policy journal of our time. Irving co-founded it in 1965, then closed it 40 years later, saying with characteristic equanimity, "No journal is meant to last forever."

A new time, a new journal. On Sept. 8, 2009, the first issue of a new quarterly, National Affairs -- successor to The Public Interest -- was published. Irving Kristol died 10 days later, but not before writing a letter to its editor -- two generations his junior -- expressing pleasure at its creation.

That small tender shoot, yet another legacy of this great good life, was the last Irving lived to see. We shall see many more.