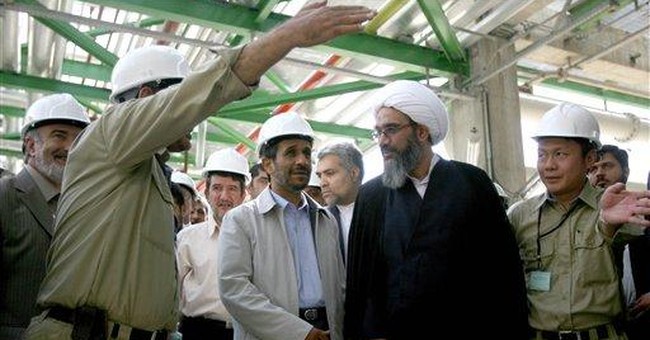 WASHINGTON -- Iran today is a revolution in search of its Yeltsin. Without leadership, demonstrators will take to the street only so many times to face tear gas, batons and bullets. They need a leader like Boris Yeltsin: a former establishment figure with newly revolutionary credentials and legitimacy, who stands on a tank and gives the opposition direction by calling for the unthinkable -- the abolition of the old political order.

Right now the Iranian revolution has no leader. As this is written, opposition candidate Mir Hossein Mousavi has not appeared in public since June 18. And the Khamenei-Ahmadinejad regime has shown the requisite efficiency and ruthlessness at suppressing widespread unrest. Their brutality has been deployed intelligently. The key is to atomize the opposition. Start with the most sophisticated methods to block Internet and cell phone traffic, thanks to technology provided by Nokia Siemens Networks. Allow the more massive demonstrations to largely come and go -- avoiding Tiananmen-style wholesale bloodshed -- but disrupt the smaller ones with street-side violence and rooftop snipers, the perfect instrument of terror. Death instant and unseen, the kind that only the most reckless and courageous will brave.

Terror visited by invisible men. From rooftops by day. And by night, swift and sudden raids that pull students out of dormitories, the wounded out of hospitals, for beatings and disappearances.

For all our sentimental belief in the ultimate triumph of those on the "right side of history," nothing is inevitable. This second Iranian revolution is on the defensive, even in retreat. To recover, it needs mass, because every dictatorship fears the moment when it gives the order to the gunmen to shoot at the crowd. If they do (Tiananmen), the regime survives; if they don't (Romania's Ceausescu), the dictators die like dogs. The opposition needs a general strike and major rallies in the major cities -- but this time with someone who stands up and points out the road ahead.

Desperately seeking Yeltsin. Does this revolution have one? Or to put it another way, can Mousavi become Yeltsin?

President Obama's worst misstep during the Iranian upheaval occurred early on when he publicly discounted the policy differences between Mahmoud Ahmadinejad and Mousavi.

True, but that overlooked two extremely important points. First, while Mousavi himself was originally only a few inches to Ahmadinejad's left on the political spectrum -- being hand-picked by the ruling establishment precisely for his ideological reliability -- Mousavi's support was not restricted to those whose views matched his. He would have been the electoral choice of everyone to his left, a massive national constituency -- liberals, liberalizers, secularists, monarchists, radicals and visceral opponents of the entire regime -- that dwarfs those who shared his positions, as originally held.

Moreover, Mousavi's positions have changed, just as he has. He is far different today from the Mousavi who began this electoral campaign.

Revolutions are dynamic, fluid. It is true that two months ago there was little difference between Ahmadinejad and Mousavi. But that day is long gone. Revolutions outrun their origins. And they transform their leaders.

Mikhail Gorbachev and Yeltsin both began as orthodox party regulars. They subsequently evolved together into reformers. Then came the revolution. Gorbachev could not shake himself from the system. Yeltsin rose up and engineered its destruction.

In the 1980s, Mousavi was Ayatollah Khomeini's prime minister, a brutal enforcer of orthodox Islamism. Twenty years later, he started out running for president advocating little more than cosmetic moderation. But then the revolutionary dynamic began: The millions who rallied to his cause -- millions far to his left -- began to radicalize him. The stolen election radicalized him even more. Finally, the bloody suppression of his followers led him to make statements just short of challenging the legitimacy of Ayatollah Ali Khamenei and the very foundations of the regime. The dynamic continues: The regime is preparing the basis for Mousavi's indictment (for sedition), arrest, even possible execution. The prospect of hanging radicalizes further.

As Mousavi hovers between Gorbachev and Yeltsin, between reformer and revolutionary, between figurehead and leader, the revolution hangs in the balance. The regime may neutralize him by arrest or even murder. It may buy him off with offers of safety and a sinecure. He may well prefer to let this cup pass from his lips.

But choose he must, and choose quickly. This is his moment and it is fading rapidly. Unless Mousavi rises to it, or another rises in his place, Iran's democratic uprising will end not as Russia 1991, but as China 1989.