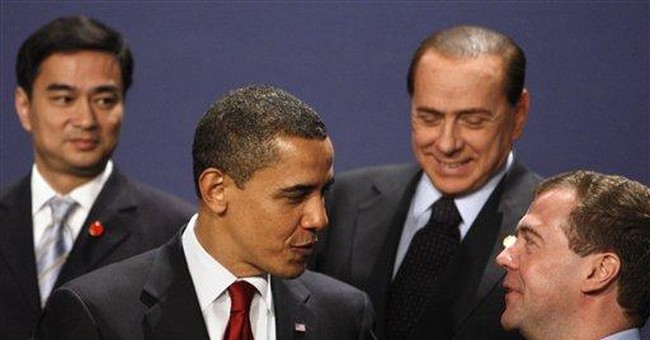 WASHINGTON -- Five minutes of explanation to James Madison, and he'll have a pretty good idea what a motorcar is (basically a steamboat on wheels; the internal combustion engine might take a few minutes more). Then try to explain to Madison how the Constitution he fathered allows the president to unilaterally guarantee the repair or replacement of every component of millions of such contraptions sold in the several states, and you will leave him slack-jawed.

In fact, we are now so deep into government intervention that constitutional objections are summarily swept aside. The last Treasury secretary brought the nine largest banks into his office and informed them that henceforth he was their partner. His successor is seeking the power to seize any financial institution at his own discretion.

Despite these astonishments, I remain more amused than alarmed. First, the notion of presidential car warranties strikes me as simply too bizarre, too comical, to mark the beginning of Yankee Peronism.

Second, there is every political incentive to make these interventions in the banks and autos temporary and circumscribed. For President Obama, autos and banks are sideshows. Enormous sideshows, to be sure, but had the financial meltdown and the looming auto bankruptcies not been handed to him, he would hardly have gone seeking to be the nation's car and credit czar.

Obama has far different ambitions. His goal is to rewrite the American social compact, to recast the relationship between government and citizen. He wants government to narrow the nation's income and anxiety gaps. Soak the rich for reasons of revenue and justice. Nationalize health care and federalize education to grant all citizens of all classes the freedom from anxiety about health care and college that the rich enjoy. And fund this vast new social safety net through the cash cow of a disguised carbon tax.

Obama is a leveler. He has come to narrow the divide between rich and poor. For him the ultimate social value is fairness. Imposing it upon the American social order is his mission.

Fairness through leveling is the essence of Obamaism. (Asked by Charlie Gibson during a campaign debate about his support for raising capital gains taxes -- even if they caused a net revenue (BEG ITAL)loss(END ITAL) to the government -- Obama stuck to the tax hike "for purposes of fairness.") The elements are highly progressive taxation, federalized health care and higher education, and revenue-producing energy controls. But first he must deal with the sideshows. They could sink the economy and poison his public support before he gets to enact his real agenda.

The big sideshows, of course, are the credit crisis, which Obama has contracted out to Treasury Secretary Tim Geithner, and the collapse of the U.S. automakers, which Obama seems to have taken on for himself.

That was a tactical mistake. Better to have let the car companies go directly to Chapter 11 and have a judge mete out the bitter medicine to the workers and bondholders.

By sacking GM's CEO, packing the new board, and giving direction as to which brands to drop and what kind of cars to make, Obama takes ownership of General Motors. He may soon come to regret it. He has now gotten himself so entangled in the car business that he is personally guaranteeing your muffler. (Upon reflection, a job best left to the congenitally unmuffled Joe Biden.)

Some find in this descent into large-scale industrial policy a whiff of 1930s-style fascist corporatism. I have my doubts. These interventions are rather targeted. They involve global financial institutions that even the Bush administration decided had to be nationalized, and auto companies that themselves came begging to the government for money.

Bizarre and constitutionally suspect as these interventions may be, the transformation of the American system will come from elsewhere. The credit crisis will pass and the auto overcapacity will sort itself out one way or the other. The reordering of the American system will come not from these temporary interventions, into which Obama has reluctantly waded. It will come from Obama's real agenda: his holy trinity of health care, education and energy. Out of these will come a radical extension of the welfare state, social and economic leveling in the name of fairness, and a massive increase in the size, scope and reach of government.