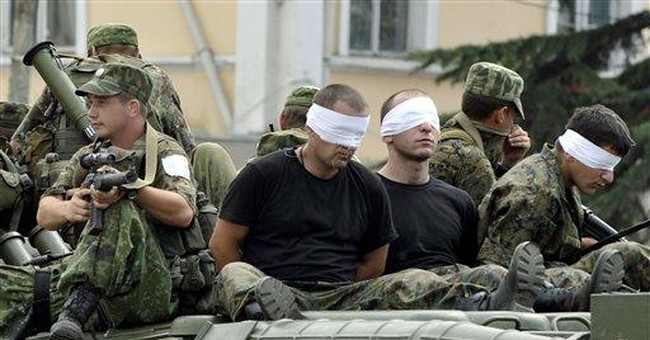 WASHINGTON -- Read the first five paragraphs of the NATO statement on the Russian invasion of Georgia and you will find not a hint of who invaded whom. The statement is almost comically evenhanded. "We deplore all loss of life," it declared, as if deploring a bus accident. And, it "expressed its grave concern over the situation in Georgia." Situation, mind you.

It's not until paragraph six that NATO, a 26-nation alliance with 900 million people and nearly half of world GDP, unsheathes its mighty sword, boldly declaring "Russian military action" -- not aggression, not invasion, not even incursion, but "action" -- to be "inconsistent with its peacekeeping role."

Having launched a fearsome tautology Moscow's way, what further action does the Greatest Alliance Of All Time take? Cancels the next NATO-Russia Council meeting.

That's it. No dissolution of the G-8. No blocking of Russian entry to the World Trade Organization. No suspension of participation in the 2014 Sochi Winter Olympics (15 miles from the Georgian border). No statement of support for the Saakashvili government.

Remember: At issue is not military action, only measures -- painless for the West -- that would significantly affect Russia. In Soviet days, Russia didn't care because it was at the center of a self-enclosed autarkic system that included 15 Soviet republics, all of Eastern Europe and a collection of overseas colonies. With these all gone, post-Soviet Russia is infinitely more dependent on the international system. It has political/economic pressure points. Yet with Georgia occupied, its infrastructure stripped and its capital under siege, NATO pushed not one of them.

Russian TV is already trumpeting "a crack in the NATO camp." More like a chasm. Writing in the Times of London, British Foreign Secretary David Miliband even opposes expelling Russia from the G-8 -- a perfectly calibrated and long-overdue measure. And a German diplomat says the Georgia issue should not have been brought to NATO in the first place, but instead to the (BEG ITAL)Organization for Security and Cooperation in Europe(END ITAL), a completely toothless consultative body, and to the United Nations, where inaction is guaranteed by the Russian veto.

To their credit, the French tried to do something. Unfortunately, President Nicolas Sarkozy was snookered by Moscow. Article V of the cease-fire agreement he brokered, allowing Russia the right to "implement additional security measures" within the borders of Georgia, is a blank check for Russian occupation.

So much for Old Europe. New Europe, with fresher memories of Russian oppression, was not so supine. The presidents of the Baltic republics (plus Ukraine and Poland) flew to Tbilisi to express solidarity with the Saakashvili government. Ukraine threatened the Russian fleet with loss of its Crimean base, and even offered to turn two ex-Soviet radar stations over to the West. And Poland dropped its dithering over details of a missile defense battery, agreeing almost overnight to American terms.

Eastern Europe understands the stakes in Georgia. It is the ultimate target. Russia's aims are clear: (1) sever South Ossetia and Abkhazia from Georgia for incorporation into Russia; (2) bring down Georgia's pro-Western government; and (3) intimidate Eastern European countries into re-entering the Russian sphere of influence.

Objective No. 1 is already achieved. Georgia will never recover its provinces. They will soon be absorbed into Russia.

Objective No. 3 has backfired, for now. The Eastern Europeans have rallied to Georgia -- and to the United States.

Objective No. 2 remains in the balance. Russian tanks have cut Georgia in half. Its largest port has been ransacked. Its capital is isolated. Russia shows every sign of staying in place by maintaining checkpoints and ultimate control.

If conditions continue, Georgia will be strangled and Saakashvili will fall, to be replaced by a Russian client whom Russia will offer to deal with magnanimously. Russia will have demonstrated its capacity to destroy a neighboring pro-Western regime without full-scale invasion or occupation and with zero resistance from NATO. Eastern European leaders will observe this outcome with shock, rethink their reflexive move toward the West and, in time, begin to accommodate themselves to Russian ambitions. Every Russian objective will have been achieved.

That is why so much hinges on the next few weeks, a time of maximum pressure on the Saakashvili government. The goal of this war is to demoralize and dominate Eastern Europe. Its outcome depends entirely on one development: Whether Russia succeeds in bringing down what it contemptuously calls "the Tbilisi regime." The fate of far more than Georgia is at stake.