The debate on Iraq takes a turn 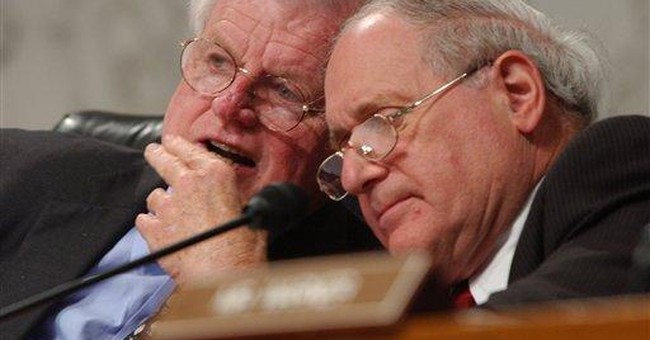 WASHINGTON -- After months of surreality, the Iraq debate has quite abruptly acquired a relationship to reality. Following the Democratic victory last November, panicked Republican senators began rifling the thesaurus to find exactly the right phrase to express exactly the right nuance to establish exactly the right distance from the president's Iraq policy, while Murtha Democrats searched for exactly the right legislative ruse to force a retreat from Iraq without appearing to do so.

In the last month, however, as a consensus has emerged about realities on the ground in Iraq, a reasoned debate has begun. A number of fair-minded observers, both critics and supporters of the war, agree that the surge has yielded considerable military progress, while at the national political level the Maliki government remains a disaster.

The latest report from the battlefield is from Carl Levin, Democratic chairman of the Senate Armed Services Committee and a strong Iraq War critic. He returned saying essentially what we have heard from Michael O'Hanlon and Kenneth Pollack of the Brookings Institution and various liberal congressmen, the latest being Brian Baird, D-Wash.: Al-Qaeda has been seriously set back as Sunni tribal leaders in Anbar, Diyala and other provinces switched from the insurgency to our side.

As critics acknowledge military improvement, the administration is finally beginning to concede the political reality that the Maliki government is hopeless. Bush's own national security adviser had said as much in a leaked memo back in November. I and others have been arguing that for months. And when Levin returned and openly called for the Iraqi Parliament to vote out the Maliki government, the president pointedly refused to contradict him.

This convergence about the actual situation in Baghdad will take some of the drama out the highly anticipated Petraeus moment next month. We know what the general and Ambassador Ryan Crocker are going to say when they testify before Congress because multiple sources have already told us what is happening on the ground.

There will, of course, be the Harry Reids and those on the far left who will deny inconvenient reality. Reid will continue to call the surge a failure, as he has since even before it began. And the left will continue to portray Gen. David Petraeus as an unscrupulous commander quite prepared to send his troops into a hopeless battle in order to advance his political ambitions (although exactly how that works is not clear).

But the serious voices will prevail. When the Democratic presidential front-runner concedes that the surge "is working" (albeit very late) against the insurgency, and when Petraeus himself concedes that the surge cannot continue indefinitely, making inevitable a drawdown of troops sometime in the middle of next year, the terms of the Iraq debate become narrow and the policy question simple: What do we do right now -- continue the surge or cut it short and begin withdrawal?

Serious people like Levin argue that with a nonfunctional and sectarian Baghdad government, we can never achieve national reconciliation. Thus the current military successes will prove ephemeral.

The problem with this argument is that it confuses long term and short term. In the longer run, there must be a national unity government. But in the shorter term, our assumption that a national unity government is required to pacify the Sunni insurgency turned out to be false. The Sunnis have turned against al-Qaeda and are gradually switching sides in the absence of any oil, federalism or de-Baathification deal coming out of Baghdad.

In the interim, the surge is advancing our two immediate objectives in Iraq: (a) to defeat al-Qaeda in Iraq and prevent the emergence of an al-Qaeda mini-state, and (b) to pacify the Sunni insurgency, which began the post-liberation downward spiral of sectarian bloodshed, economic stagnation and aborted reconstruction.

Levin is right that we require a truly national government in Baghdad to obtain our ultimate objective of what O'Hanlon and Pollack call "sustainable stability." The administration had vainly hoped that the surge would provide a window for the Maliki government to reform and become that kind of government. It will not.

We should have given up on Maliki long ago and begun to work with other parties in the Iraqi Parliament to bring down the government, yielding either a new coalition of less sectarian parties or, as Pollack has suggested, new elections.

The choice is difficult because replacing the Maliki government will take time and because there is no guarantee of ultimate political success. Nonetheless, continuing the surge while finally trying to change the central government is the most rational choice because the only available alternative is defeat -- a defeat that is not at all inevitable and would be both catastrophic and self-inflicted.