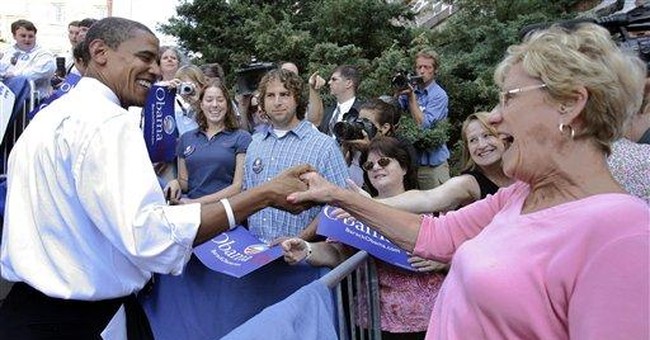 WASHINGTON -- For Barack Obama, it was strike two. And this one was a right-down-the-middle question from a YouTuber in Monday night's South Carolina debate: "Would you be willing to meet separately, without precondition, during the first year of your administration, in Washington or anywhere else, with the leaders of Iran, Syria, Venezuela, Cuba and North Korea?"

"I would," responded Obama.

His explanation dug him even deeper: "The notion that somehow not talking to countries is punishment to them -- which has been the guiding diplomatic principle of this administration -- is ridiculous."

From The Nation's David Corn to super-blogger Mickey Kaus, a near audible gasp. For Hillary Clinton, next in line at the debate, an unmissable opportunity. She pounced: "I will not promise to meet with the leaders of these countries during my first year." And she then proceeded to give the reasons any graduate student could tick off: You don't want to be used for their propaganda. You need to know their intentions. Such meetings can make the situation worse.

Just to make sure no one missed how the grizzled veteran showed up the clueless rookie, the next day Clinton told the Quad-City Times of Davenport, Iowa, that Obama's comment "was irresponsible and frankly naive."

To be on the same stage as the leader of the world's greatest power is of course a prize. That is why the Chinese deemed it a slap in the face that President Bush last year denied President Hu Jintao the full state-visit treatment. The presence of an American president is a valued good to be rationed -- and granted only in return for important considerations.

Moreover, summits can also be traps if they're not wired in advance for success, such as Nixon's trip to China, for which Henry Kissinger had already largely hammered out the famous Shanghai communique. You don't go hoping for the best, as Hillary's husband learned at the 2000 Camp David summit, when Yasser Arafat's refusal of Israel's peace offer brought Arafat worldwide opprobrium -- from which he sought (successfully, as it turned out) to escape by launching the second intifada. Such can be the consequences of ill-prepared summits.

Obama may not have known he made an error, but his staff sure did. In the post-debate spin room, his closest adviser, David Axelrod, was already backpedaling, pretending that Obama had been talking about diplomacy and not summitry with rogue state leaders.

Obama enthusiasts might want to write this off as a solitary slip. Except that this was the second time. The first occurred in another unscripted moment. During the April 26 South Carolina candidates' debate, Brian Williams asked what kind of change in the U.S. military posture abroad Obama would order in response to a hypothetical al-Qaeda strike on two American cities.

Obama's answer: "Well, the first thing we would have to do is make sure that we've got an effective emergency response -- something that this administration failed to do when we had a hurricane in New Orleans."

Asked to be commander in chief, Obama could only play first-responder in chief. Caught off guard, and without his advisers, he simply slipped into two automatic talking points: emergency response and its corollary -- the obligatory Katrina Bush-bash.

When the same question came to Hillary, she again pounced: "I think a president must move as swiftly as is prudent to retaliate." Retaliatory attack did not come up in Obama's 200-word meander into multilateralism and intelligence gathering.

These gaffes lead to one of two conclusions: (1) Obama is inexplicably unable to think on his feet while standing on South Carolina soil, or (2) Obama is not ready to be a wartime president.

During our 1990s holiday from history, being a national-security amateur was not an issue. Between the 1991 death of the Soviet Union and the terror attacks of 2001, foreign policy played almost no part in our presidential campaigns. But post-9/11, as during the Cold War, the country demands a serious commander in chief. It is hard to imagine that with all the electoral tides running in their favor, the Democrats would risk it all by nominating a novice for a wartime presidency.

Do the Democrats want to risk strike three, another national security question blown, but this time perhaps in a final presidential debate before the '08 election, rather than a midseason intraparty cattle call? The country might decide that it prefers, yes, a Republican -- say, 9/11 veteran Rudy Giuliani -- to a freshman senator who does not instinctively understand why an American president does not share the honor of his office with a malevolent clown like Hugo Chavez.