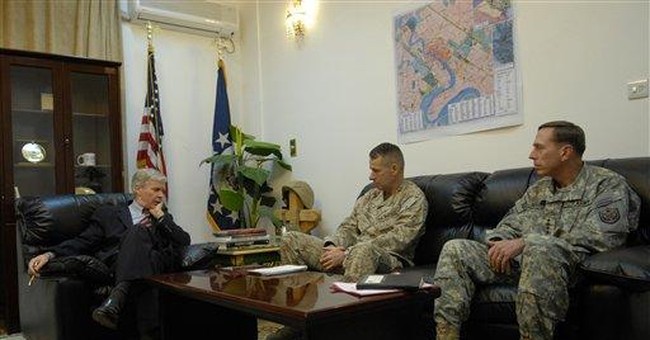 WASHINGTON -- Amid the Senate's all-night pillow fight and other Iraq grandstanding, real things are happening on the ground in Iraq. They consist of more than just a surge of U.S. troop levels. Gen. David Petraeus and Ambassador Ryan Crocker have engaged us in a far-reaching and fundamental political shift. Call it the 20 percent solution.

Ever since the December 2005 Iraqi elections, the U.S. has been waiting for the central government in Baghdad to pass grand national accords on oil, federalism and de-Baathification to unify and pacify the country. The Maliki government has proved too sectarian, too weak and perhaps too disposed to Iranian interests to rise to the task.

The Democrats cite this incapacity as a reason to give up and get out. A tempting thought, but ultimately self-destructive to our interests. Accordingly, Petraeus and Crocker have found a Plan B: pacify the country region by region, principally by getting Sunnis to join the fight against al-Qaeda.

his has begun to happen in Anbar and Diyala. First, because al-Qaeda are foreigners. So are we, but -- reason No. 2 -- unlike them, we are not barbarous. We don't amputate fingers for smoking, decapitate with pleasure and kill Shiites for sport.

Third, al-Qaeda's objectives are not the Sunnis'. Al-Qaeda live for endless war and a reborn caliphate. Ultimately, they live to die. Iraqi Sunnis are not looking for a heavenly date with 72 virgins. They are looking for a deal, and perhaps just survival after U.S. troops are gone.

That's why so many Sunnis have accepted Petraeus' bargain -- they join our fight against al-Qaeda and we give them weaponry and military support. With that, they can rid themselves of the al-Qaeda cancer now. And later, when the Americans inevitably leave, they'll be better positioned to defend themselves against the 80 percent Shiite-Kurd majority they are beginning to realize they may have unwisely taken on.

The place of his capture -- Mosul -- is also telling. Mosul is where you go if you've been driven out of Anbar and Diyala and have no other good place to go. You don't venture into the Shiite south or the purely Kurdish north where the locals will kill you.

The charge against our previous war strategy was that we were playing whack-a-mole: they escape from here, they re-establish there. Petraeus' plan is to eliminate all al-Qaeda sanctuaries.

You hardly hear about that from the anti-war Democrats in the Senate. But you did hear it from someone closer to the scene: Shiite lawmaker and close Maliki adviser Hassan al-Suneid. He is none too happy with the new American strategy. He complained bitterly about the overtures to Sunni groups in Anbar and Diyala. "These are gangs of killers," he told the AP. Petraeus is following a plan according to a "purely American vision."

How very true and very refreshing. We had been vainly pursuing an Iraqi vision that depended on people like Suneid and Maliki to make the grand bargain. So now, the American vision. "The strategy that Petraeus is following might succeed in confronting al-Qaeda in the early period but it will leave Iraq an armed nation, an armed society and militias," said Suneid.

Again, he is precisely right. His coalition would not or could not disarm the militias. So Petraeus has taken on the two extremes: (a) the Shiite militias and their Iranian Revolutionary Guard enablers, and (b) al-Qaeda, with the help of local Sunnis.

For an interminable 18 months we waited for the 80 percent solution -- for Maliki's Shiite-Kurdish coalition to reach out to the Sunnis. The Petraeus-Crocker plan is the 20 percent solution: peel the Sunnis away from the insurgency by giving them the security and weaponry to fight the new common enemy -- al-Qaeda in Iraq.

Maliki & Co. are afraid we are arming Sunnis for the civil war to come. On the other hand, we might be creating a rough balance of forces that would act as a deterrent to all-out civil war and encourage a relatively peaceful accommodation.

In either case, that will be Iraq's problem after we leave. For now, our problem is al-Qaeda on the Sunni side and the extremist militias on the Shiite side. And we are making enough headway to worry people like Suneid. The Democrats might listen to him to understand how profoundly the situation is changing on the ground -- and think twice before they pull the plug on this complicated, ruthless, hopeful "purely American vision."