Hamas in Gaza: Trouble All Around 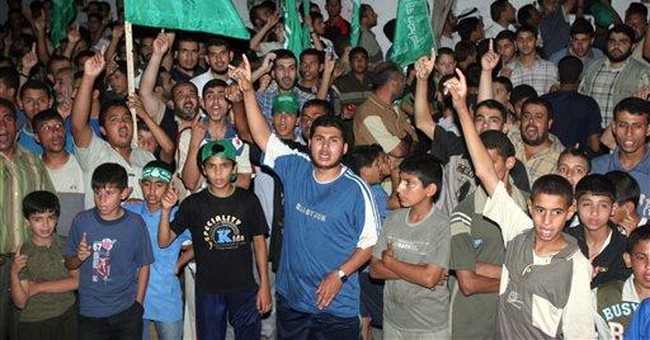 WASHINGTON -- Gaza is now run not by a conventional political party, but by a movement that is revolutionary, Islamist and terrorist. Worse, Hamas is a client of Iran. Gaza now constitutes the farthest reach of the archipelago of Iranian proxies: Hamas in Palestine, Hezbollah in Lebanon, the Mahdi Army (among others) in Iraq, and the Alawite regime of Syria.

This Islamist mini-replica of Comintern is at war not just with Israel but with the moderate Arab states, who finally woke up to this threat last summer when they denounced Hezbollah for provoking the Lebanon war with Israel. The fall of Gaza is particularly terrifying to Egypt because Hamas is so closely affiliated with the Muslim Brotherhood, the chief Islamist threat to the secular-nationalist regime that has ruled Egypt since the revolution of 1952. Which is why Egypt has just invited Israeli, Jordanian and moderate Palestinian leaders to a summit next week -- pointedly excluding and isolating Hamas.

The splitting of Palestine into two entities is nonetheless clarifying. Since Hamas won the parliamentary elections of January 2006, we've had to deal with the fiction of a supposedly unified Palestine ruled by an avowedly ``unity'' government of Fatah and Hamas. Now the muddle has undergone political hydrolysis, separating out the relatively pure elements: a Hamas-ruled Gaza and Fatah-ruled (for now) West Bank.

The policy implications are obvious. There is nothing to do with the self-proclaimed radical Islamist entity that is Gaza but to isolate it. No recognition, no aid (except humanitarian necessities through the U.N.), no diplomatic commerce.

Israel now has the opportunity to establish deterrence against unremitting rocket attacks from Gaza into Israeli villages. Israel failed to do that after it evacuated Gaza in 2005, permitting the development of an unprecedented parasitism by willingly supplying food, water, electricity and gasoline to a territory that was actively waging hostilities against it.

With Hamas now clearly in charge, Israel should declare that it will tolerate no more rocket fire -- that the next Qassam will be answered with a cutoff of gasoline shipments. This should bring road traffic in Gaza to a halt within days and make it increasingly difficult to ferry around missiles and launchers.

If that fails to concentrate the mind, the next step should be to cut off electricity. When the world wails, Israel should ask, what other country on earth is expected to supply the very means for a declared enemy to attack it?

But let's remember who Abbas is. He appears well intentioned but he is afflicted with near-disastrous weaknesses. He controls little. His troops in Gaza simply collapsed against the greatly outnumbered forces of Hamas. His authority in the West Bank is far from universal. He does not even control the various factions within Fatah.

But the greater liability is his character. He is weak and indecisive. When he was Yasser Arafat's deputy, Abbas was known to respond to being slapped down by his boss by simply disappearing for weeks in a sulk. During the battle for Gaza, he did not order his Fatah forces to return fire against the Hamas insurrection until the fight was essentially over. Remember, too, that after Arafat's death Abbas ran the Palestinian Authority without a Hamas presence for more than a year. Can you name a single thing he achieved in that time?

Moreover, his Fatah party is ideologically spent and widely discredited. Historian Michael Oren points out that the Palestinian Authority has received more per capita aid than did Europe under the Marshall Plan. This astonishing largesse has disappeared into lavish villas for party bosses and guns for the multiple militias Arafat established.

The West is rushing to bolster Abbas. Israel will release hundreds of millions in tax monies. The U.S. and the EU will be pouring in aid. All praise Abbas as a cross between Anwar Sadat and Simon Bolivar. Fine. We have no choice but to support him. But before we give him the moon, we should insist upon reasonable benchmarks of both moderation and good governance -- exactly what we failed to do during the Oslo process. Abbas needs to demonstrate his ability to run a clean administration and to engage Israel in day-to-day negotiations to alleviate the conditions of life on the ground.

Abbas is not Hamas. But despite the geographical advantages, he does not represent the second coming either. We can prop him up only so much. In the end, the only one who can make a success of the West Bank is Abbas himself. This is his chance. His last chance.