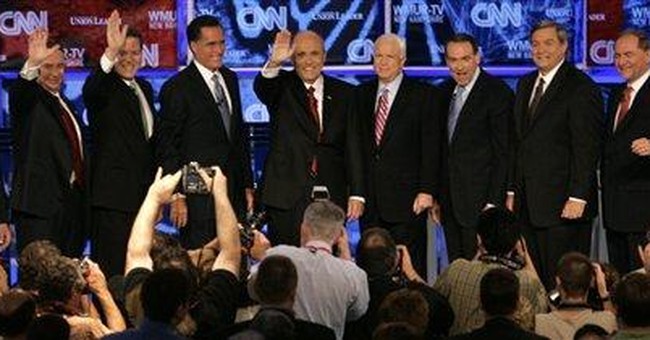 WASHINGTON -- In Britain, Canada and other civilized places, national elections are often called, run and concluded within six weeks. In America, election campaigns go on forever. It used to be one year, now it's two. No one planned this, but like other evolutionary artifacts (the Founders applied intelligent design to the general makeup of the U.S. government but never foresaw formal political parties, let alone the endless campaign), this crazy improvisation embodies a certain wisdom.

First, it tests a certain kind of competence. Managing a national campaign in a country of continental dimensions requires exceptional organizational skills. A fairly narrow competence, to be sure, but of major importance in a country where the president must run the behemoth that is the federal government.

The second function of the endless campaign is to build party consensus and democratic legitimacy, both of which contribute substantially to the astonishing stability and longevity of the American system. The presidential primary season is essentially a prolonged intra-party dialogue. It re-creates the Madisonian idea of factions and interests competing against each other, applied not to the legislature or the executive, but to the electoral process that produces both.

The job of the parties is to create a kind of pre-legislative consensus through the competition and conversation of the various factions -- ethnic, ideological, economic, geographic. The purpose of the endless presidential primary is to force the dialogue and, for all its haphazard meanderings and maddening trivialities, it does.

Unscripted, of course, and much of it goes nowhere. But not always. Perhaps Barack Obama's suggestion during a television interview that we should be moving away from preferences based on race to preferences based on class will be ignored. But perhaps it will be taken up by an opponent or the media and provoke a historic debate within the Democratic Party on affirmative action and a transition to a new national consensus.

Similarly, Rudy Giuliani wrestles with the abortion issue (and, in the eyes of many, loses). He will be asked the question repeatedly. He will have to answer repeatedly. Should he prevail as the Republican nominee, it will perhaps represent a historic shift in the very self-definition of American conservatism.

Perhaps. Nothing is guaranteed. But we do have the striking example of welfare reform, the most significant social advance of our time. Its political origin was the first presidential campaign of Bill Clinton, who distinguished himself from the field as a New Democrat by pledging to end welfare as we know it -- thus giving him the legitimacy within the Democratic Party to carry out so radical a reform. When serendipity presented him with the Republican Congress committed to the same objective, the reform got done.

The final function of the endless campaign, and perhaps the most psychologically important, is to satisfy the American instinct for egalitarianism. We have turned the presidential campaign into a pleasingly degrading ordeal -- pleasing, that is, to the electorate. The modern presidential campaign is meant to be physically exhausting and spiritually humbling almost to the point of humiliation. Candidates spend two years and more on bended knee begging for money, votes and a handshake in a diner.

Why do we inflict such cruel and unusual punishment? Because our winner is not just chief magistrate but king. True, the kingship is temporary, but its glories and perks are beyond compare -- the pomp and pampering of a head of state, married to the real political power of controlling the most important state on the planet.

The bargain we offer the candidate is this: We will make you Lord, circling celestially above us on Air Force One, but because we are flinty Jeffersonian yeomen, we insist that you flatter us first with a very extended show of camaraderie and commonality with the Iowa farmer, the New Hampshire alderman and the South Carolina good ol' boy. Aboriginal tribes have slightly different rituals for those who pretend to kingship, but the idea is the same: ordeal before dominion.

As a columnist whose job it is to chart every jot and tittle of these campaigns, every teapot tempest that history will remember for not one second, I curse election years. Now I have to curse the year before as well. But for all its bizarre meanderings, the endless campaign serves critical purposes.

The first two -- testing the candidates' managerial and consensus-building skills -- are undeniably useful. But like most Americans, I find it is the third -- the gratuitous humiliation of our would-be kings -- that makes it all worthwhile.