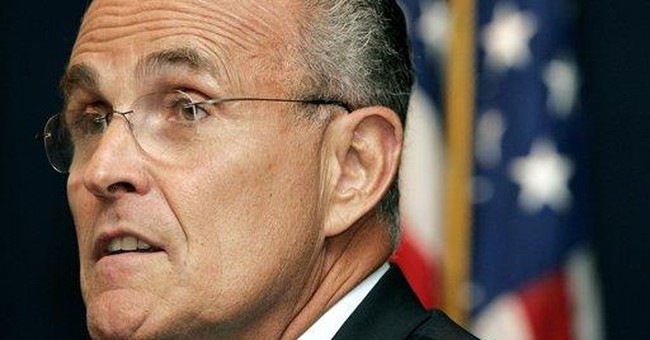 Legalizing abortion by judicial fiat (Roe v. Wade) instead of by democratic means has its price. One is that the issue remains socially unsettled. People take to the streets when they have been deprived of resort to legislative action.

The other effect is to render the very debate hopelessly muddled. Instead of discussing what a decent society owes women and what it owes soon-to-be-born infants, and trying to balance the two by politically hammering out regulations that a broad national consensus can support, we debate the constitutional niceties of a 35-year-old appallingly crafted Supreme Court decision.

Just how tangled the issue gets is illustrated by the current brouhaha over Rudy Giuliani's abortion response in the first Republican presidential debate. Spokesmen for the other candidates have gleefully seized upon what they deem to be Giuliani's gaffe -- not only defying Republican orthodoxy but appearing to want to have it every which way.

Giuliani: It would be OK to repeal. It would be also (OK) if a strict constructionist judge viewed it as precedent and I think a judge has to make that decision.

Moderator: Would it be OK if they didn't repeal it?

Giuliani: I think the court has to make that decision and then the country can deal with it. ... states can make their own decisions.

Giuliani's response has been almost universally characterized as a blundering two-way pander. I think not. I've actually heard Giuliani elaborate his position on abortion. His debate answer is an overly concise version of it, which makes it so open to ridicule.

Democrats are pro-choice and have an abortion litmus test for judges they would nominate to the Supreme Court. Giuliani is pro-choice but has no such litmus test. The key phrase in his answer is ``strict constructionist judge.'' On judicial issues in general he believes in ``strict constructionism,'' the common conservative view that we don't want judges citing penumbral emanations and other constitutional vapors to justify inventing new rights they fancy the country needs.

And there is precedent for strict constructionists accepting even bad constitutional rulings after the passage of time. The most famous recent example is Chief Justice William Rehnquist for years opposing the original 1966 Miranda ruling as ``legislating from the bench," but upholding it in 2000 on the grounds that it had become so engrained in American life that its precedental authority trumped its bastard constitutional origins. (He used different words.)

In a country with a rational debate about abortion, Giuliani would simply have been asked how he would regulate (up to and including banning) abortion. That's not a relevant question here because neither presidents nor legislatures nor referendums decide this. Judges do. All presidents do is appoint judges.

Giuliani's answer on how to go about picking such judges is perfectly reasonable. It appears to be a dodge about the abortion issue itself simply because -- thanks to Roe -- every such debate becomes tangled with otherwise irrelevant issues of constitutional doctrine and stare decisis.

To give you an idea of how muddied the abortion debate has become thanks to this gratuitous constitutional overlay, consider the recent Supreme Court decision upholding the ban on partial-birth abortion. It has been misread by partisans on both sides. Pro-choice advocates denounced it as the beginning of a gradual cutting back on abortion rights. Pro-lifers celebrated it for precisely that reason.

It is nothing of the kind. The only reason the court upheld the ban is because an alternative (far more commonly used, in fact) to this mid-to-late-term procedure is readily available. Hence no ``undue burden'' on the woman. Hence it respects the confines of existing abortion jurisprudence. Roe (and its successors) lives.

I hope for the day when Roe is overturned, not because I want to see abortion criminalized -- I once voted in a Maryland referendum to keep abortion legal if Roe is ever repealed -- but to sweep away this ridiculous muddle. Perhaps Giuliani should have said something like that rather than leaving the precedent question up to judges. Abortion is already so contaminated with legalisms, why not turn the issue into one of simple democracy? Let the people decide. Let them work it out the way everything else in this country is worked out -- by political argument and legislative accommodation.