Forcing U.S. to quit in Iraq 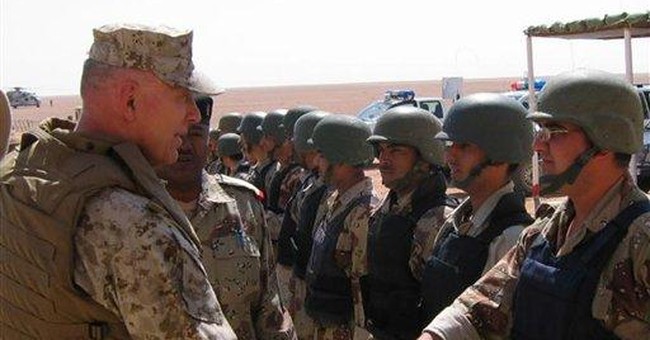 By the day, the debate at home about Iraq becomes increasingly disconnected from the realities of the actual war on the ground. The Democrats in Congress are so consumed with negotiating among their factions the most clever linguistic device to legislatively ensure the failure of the administration's current military strategy -- while not appearing to do so -- that they speak almost not at all about the first visible results of that strategy.

And preliminary results are visible. The landscape is shifting in the two fronts of the current troop surge: Anbar province and Baghdad.

The news from Anbar is the most promising. Only last fall, the Marines' leading intelligence officer there concluded that the U.S. had essentially lost the fight to al-Qaeda. Yet, just this week, the marine commandant, Gen. James Conway, returned from a four-day visit to the province and reported that we "have turned the corner."

Why? Because, as Lt. Col. David Kilcullen, the Australian counterinsurgency adviser to Gen. David Petraeus, has written, 14 of the 18 tribal leaders in Anbar have turned against al-Qaeda. As a result, thousands of Sunni recruits are turning up at police stations where none could be seen before. For the first time, former insurgent strongholds such as Ramadi have a Sunni police force fighting essentially on our side.

Retired Gen. Barry McCaffrey, a major critic of the Bush war policy, now reports that in Anbar, al-Qaeda is facing "a real and growing groundswell of Sunni tribal opposition." And that "this is a crucial struggle and it is going our way -- for now."

The situation in Baghdad is more mixed. Thursday's bridge and Green Zone attacks show the insurgents' ability to bomb sensitive sites. On the other hand, pacification is proceeding. "Nowhere is safe for Westerners to linger," reported ABC's Terry McCarthy on April 3, ``but over the past week we visited five different neighborhoods where the locals told us life is slowly coming back to normal.'' He reported from Jadriyah, Karrada, Zayouna, Zawra Park and the notorious Haifa Street, previously known as "sniper alley." He found that "children have come out to play again. Shoppers are back in markets," and concluded that "nobody knows if this small safe zone will expand or get swallowed up again by violence. For the time being though, people here are happy to enjoy a life that looks almost normal."

Fouad Ajami, just returned from his seventh trip to Iraq, is similarly guardedly optimistic and explains the change this way: Fundamentally, the Sunnis have lost the battle of Baghdad. They initiated it with their indiscriminate terror campaign that they assumed would cow the Shiites, whom they view with contempt as congenitally quiescent, lower-class former subjects. They learned otherwise after the Samarra bombing (February 2006) kindled Shiite fury -- a savage militia campaign of kidnapping, indiscriminate murder and ethnic cleansing that has made Baghdad a largely Shiite city.

Petraeus is trying now to complete the defeat of the Sunni insurgents in Baghdad -- without the barbarism of the Shiite militias, whom his forces are simultaneously pursuing and suppressing.

How at this point -- with only about half of the additional surge troops yet deployed -- can Democrats be trying to force the U.S. to give up? The Democrats say they are carrying out their electoral mandate from the November election. But winning a single-vote Senate majority as a result of razor-thin victories in Montana and Virginia is hardly a landslide.

Second, if the electorate was sending an unconflicted message about withdrawal, how did the most uncompromising supporter of the war, Sen. Joe Lieberman, win handily in one of the most liberal states in the country?

And third, where was the mandate for withdrawal? Almost no Democratic candidates campaigned on that. They campaigned for changing the course the administration was on last November.

Which the president has done. He changed the civilian leadership at the Department of Defense, replaced the head of Central Command and, most critically, replaced the Iraq commander with Petraeus -- unanimously approved by the Democratic Senate -- to implement a new counterinsurgency strategy.

John McCain has had no illusions about the difficulty of this war. Nor does he now. In his bold and courageous speech at the Virginia Military Institute defending the war effort, he described the improvements on the ground while acknowledging the enormous difficulties ahead. Insisting that success in Iraq is both possible and necessary, McCain made clear that he is willing to stake his presidential ambitions, indeed his entire political career, on a war policy that is unpopular but that he believes must be pursued for the sake of the country. How many other presidential candidates -- beginning with, say, Hillary Clinton -- do you think are acting in the same spirit?